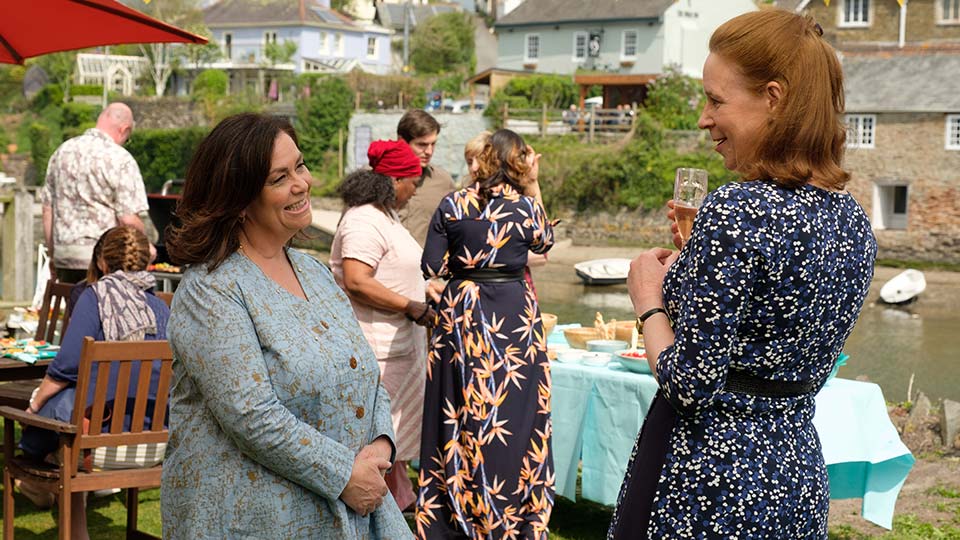 Dawn French’s new ITV drama The Trouble With Maggie Cole kicked off tonight and it crammed plenty into its series opener.

The first episode opened with someone being hit by a car. Who that person is and why they were run over, will likely be the central storyline of the series.

Following the opening credits, Maggie answered the phone and looked pleased with what the person at the other end of the phone was saying. We then jumped to Peter Cole (Mark Heap), Maggie’s husband who is a headmaster, who received a call from Maggie telling him that she was going to be on the radio. His lack of enthusiasm was picked up by Maggie but she continued to tell him about her impending lunch with a journalist.

Peter told Maggie that he had to deal with a student who had turned up at school with a dead magpie in his bag. We then learned that Maggie likes to gossip as she enquired about the student’s identity and reeled off information about his mother.

Maggie greeted Jill (Julie Hesmondhalgh) and her class who had come to visit the historic site whose gift shopped she worked at. As the kids played with the teaching assistant, Maggie and Jill had a gossip over a cup of tea. Maggie then used biscuits to bribe Jill into suggesting a float for an upcoming event so that people wouldn’t know it came from her.

Driving through Thurlbury, Maggie waved to every one she passed. Journalist Jez (John Macmillan) was slagging off the town while waiting for Maggie to arrive for her interview in a pub. He offered her a G&T and she refused but soon changed her mind. Jez ordered Maggie a double, hoping it would loosen her up to speak and it did the trick. When he started talking about stereotypes of the town, Maggie slipped up and told him that the local cricket team were drunks.

Jez asked Maggie to point him in the direction of some of the town’s most colourful characters to add to his article. Realising he was on to a good thing, Jez convinced her to have another drink so he could get even more information out of her.

Peter picked up a drunk Maggie and expressed surprise that she’d been drinking during the day. Maggie asked Peter to stop the car when she saw a dog called Buster and suggested that meant Marcus Ormansby (Patrick Robinson) was back in town. Peter was shocked when teenager Liam (Laurie Kynaston) banged on his window and Maggie asked the owner of the shop she’d gone on if they could put up her flyer about a town meeting. She stayed at the counter staring at him until he put the flyer up and then went to speak to Marcus.

She tried to get information out of Marcus to find out if he was writing a new book. He wasn’t interested in speaking to her and made his excuses to leave the shop. When Maggie got back in the car, Peter asked where the wine was she’d gone for and she told him they didn’t need it.

Alex (Arthur McBain) said goodbye to his girlfriend Roxie (Emily Reid) and his brother Liam turned up to pick him up. We then saw Kelly (Kerry Howard) being shown a new car by her partner Neil (Joe Layton) and agreed to let him take the kids for a ride in it.

Maggie had dinner with her family and her son Jamie (Phil Dunster) and his wife Becka (Gwyneth Keyworth) and couldn’t stop herself telling them about her interview. Jamie dampened her enthusiasm by saying he’d done a radio interview and they would likely cut it down before airing it. Peter then quizzed Jamie and Becka if they were planning to start a family and Maggie joined him in asking them. They evaded the question and left shortly after.

Maggie and Peter then talk about their lack of tact and they said ‘I love you’ to each other.

We then saw Brian (Lee Boardman) looking worried as they looked out the window and saw the police outside.

Maggie and Peter got ready for bed and they talked about their local GP whose husband was having an affair. They turned out the lights and Maggie turned them back on to talk about her interview. She asked Peter to get the word out and claimed she had done the interview to promote the village’s upcoming 30th anniversary celebrations. Maggie pulled out her phone to start posting messages on Jamie’s social media about her interview.

The next day Maggie had lunch with Jill and she tried to convince her to join up for a dating service. Maggie admitted she’d checked all the potential men out on the service to help Jill out. Peter called and asked Maggie why he’d been invited to a BBQ at his own house. She told him it was to celebrate her radio interview and Peter discovered she’d invited most of the town.

As Maggie prepared food in the kitchen, Peter answered the door to find Jamie and Becka waiting outside. As the party got under way, Maggie mingled with the guests to thank them for coming. She honed in on Karen (Vicki Pepperdine), Peter’s secretary, and boasted about how she had made the garden look great.

Her next target was Carol (Chetna Pandya) to find out if Jez had been to speak to her. Carol said he hadn’t and Jill also revealed she hadn’t spoken to him either. Maggie made her way over to her family, getting excited as her interview was about to come on. As The Final Countdown played, Karen got a little flirty with Peter but their moment was interrupted by Maggie banging tongs on the BBQ to get everyone’s attention.

Everyone gathered around the radio and Maggie started telling her guests about the upcoming meeting but told them to shut up when the interview started. Jez’s voice started doing the intro on the radio and he referred to Maggie as an ‘amateur historian’. Maggie realised quickly that Jez had stitched her up and taken her words out of context, editing them to make her look like a gossip.

Things got worse as the guests heard Maggie talking about how Carol’s husband was cheating on her with a man. She then gossiped about Polish shop owner Emil (Tomi May) and called his daughter a slut. Marcus was her next target and she claimed that he based all his characters on people from the village. Maggie then revealed that Brian was a gangster and went on to criticise Kelly and Neil’s spending saying they’d secretly won the jackpot.

No one was spared as Maggie rambled on about her husband retiring and then called Jill, who would be taking over the role, ‘not the sharpest tool in the box’. Maggie tried to appeal to her guests but none of them were in the mood to listen to her. Peter stepped in and told everyone the party was over. An upset Jill refused to accept Maggie’s apology and asked her to explain the context of her comments if Jez really had misrepresented them. With that Maggie was left upset and alone.

Later Peter checked on Maggie to see if she was OK and she pretended that nothing had happened. Maggie left the room and went for a bath, saying the upset would blow over the next day.

The fallout from Maggie’s comments caused friction between the residents of Thurlbury as they panicked about what to do. Carol was furious when her husband arrived home and she pointed him to her laptop where the interview was on pause.

Peter went to see if Maggie was OK in the bathroom and found her crying on the toilet. He comforted her and tried to reassure her that everything would be OK. Maggie said she didn’t mean any of what she said and expressed anger at why Jez had done that to her. Peter said he was going to break both of Jez’s legs and told Maggie the situation would get fixed. He advised her to refuse to acknowledge that the situation couldn’t be rectified and encouraged her to talk to everyone she gossiped about.

In this article:Dawn French, ITV, The Trouble With Maggie Cole