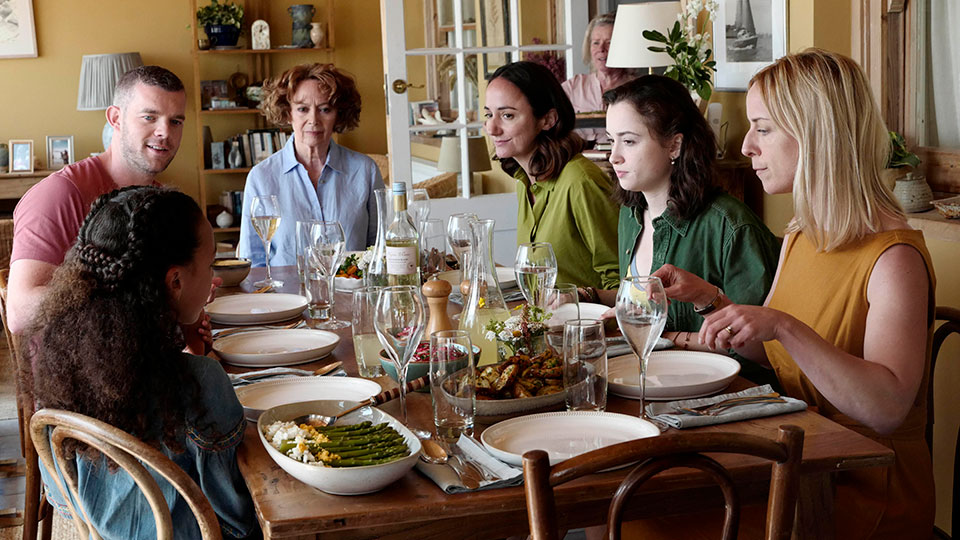 The mystery at the heart of Flesh and Blood concluded tonight but the final moments suggested it may be far from over.

Helen (Claudie Blakley) was being questioned by the police on the final episode of the series as she gave her version of what led to the incident.

Jumping back in time Vivien (Francesca Annis) woke up and chatted with Mark (Stephen Rea) about Helen’s marriage problems with George (Keir Charles). She told him that Helen never asks for help for anything, which concerned her. George left the house to do some shopping.

Jake (Russell Tovey) and Natalie (Lydia Leonard) assembled at Helen’s house for an intervention with Vivien. When she arrived she was surprised to see them and it was Helen that led the conversation with Natalie asking her mother to listen to them. The kids told her that they had found out that Mark’s ex-wife committed suicide and pointed out that he’d lied to them about it.

Helen continued telling Vivien that Mark was accused of having a hand in the suicide and they begged her not to go to India with him. Vivien told the children that Mark had been honest with her and she knew all about what happened to his ex-wife.

Jake and Helen continued to press Vivien and she refused to listen. She told all three of them that she wasn’t going to talk to them about it anymore and when they said they were worried, Vivien asked if they thought he was going to kill her. Before she left, she asked the children for their blessing and Jake sarcastically remarked that their intervention hadn’t gone well.

Arriving home, Vivien took a minute to digest what had just happened and was interrupted by a concerned Mary. Looking as if she was about to faint, Vivien was helped out of the car by Mary.

Helen took a drink up to Lily (Grace Hogg-Robinson) who was just waking up and Lily asked if Helen had told Vivien that George had left her. Lily then told her mother that she had to stop going on at George and she had to get her drinking under control.

Mary let Vivien rest up at her home and she made a pot of tea. As she made the tea, Mary contemplated a bottle of pills before joining Vivien on the sofa for a chat. They touched upon Mary losing her child during labour and Mary told Vivien not to worry about what her kids were saying about Mark.

Jake spent time at the beach with Leila (Lara Rossi) and their kids, who asked if both of their parents would be going to Disneyland with them.

That night Vivien looked very much like she was having doubts and when Mark went to sleep, she crept out of bed and went to look through the suitcase he’d packed. She found his medical pack and as she began to panic that her kids might be right, Mark walked into the room and caught her.

Cutting back to Helen being interviewed by the police, they asked her about the stress she was under with her job on the day of Vivien’s party. Helen tried to brush it off but as we saw the story unfold, it was clear she was lying.

At work Helen was informed that Meera (Clara Indrani) was suing for wrongful termination and considering bringing a case against her for harassment. As if that wasn’t enough, Helen was also told that Meera had been collecting images and videos from Lily’s social media accounts showing her vomiting after drinking too much, which she was threatening to take to the press.

Mark appealed to Vivien to talk about their issues and the subject of the kids came up. He told her he wasn’t looking forward to the party because of how the kids feel about him. Getting emotional, he told Vivien that he couldn’t cope with her not trusting him and she responded by saying that her late husband lied to her, which had made her cautious. Mark said if she didn’t trust him 100% then it was a deal breaker for him and Vivien told him she did trust him.

Helen was told that she might need to take a step back and was advised to resign so her name, and the trust’s, wasn’t dragged through the mud. As she dealt with that situation, Jake had his own mess to sort out with Stella (Sharon Small) who suggested they break things off because of his marriage. Stella told him he could stay in the flat rent free until he reunited with Leila.

Tony (Vincent Regan) tried to contain his fury with Natalie after discovering she’d lied to him about being pregnant. Despite being married, Tony climbed right up onto his high horse about her lying but told her that he still loved her and was planning to divorce his wife. He also kind of proposed to a stunned Natalie after that revelation.

Mary attempted a spot of baking ahead of the party but had to throw away her creations after they came out looking sad and burned.

Helen tracked down George and had a heart-to-heart with him. She told him she was stepping away from her job and apologised for pushing him away. He kissed her but told her he couldn’t come home yet.

Talking to the police again, Helen became tearful when recalling what happened at the party, saying the party was supposed to be the start of a new life for Vivien.

Jake and Stella’s break-up didn’t go well as they hopped into bed for one last romp. As Stella went to get her things, Leila turned up and caught them. Jake tried to follow her but she told him that they were done. Jake broke down in tears on the stairwell as Stella looked on.

Tony took Natalie to the house he was planning to buy for them. Natalie saw Tony’s new assistant out of the window and realised that he may end up having a fling with her, if he wasn’t doing so already. She told him she couldn’t ‘do this’ anymore and ran off.

As Vivien got ready, Mark rolled his eyes when Mary turned up super early. Mark tried to tell her that Vivien was getting dressed but she stormed past him to give her friend her birthday present. The present was a blanket Mary made using bits of the kids’ clothes so she wasn’t being creepy after all! Vivien also noticed that Mary was wearing one of her old dresses that she’d altered.

Helen was the next to arrive and lied that George had man flu. She was followed closely by Natalie and they both ignored Mark’s attempts to kiss them on the cheek. The sisters talked in the kitchen and Natalie revealed that she might actually be pregnant after all. Hiding their issues, they turned to booze and Jake arrived already tanked up.

Vivien found Mark hiding away on the balcony and was shocked to see him smoking. Mary, with impeccable timing, burst onto the balcony with champagne to refill their glasses and told him it was a brave man that smoked near Vivien.

As the night progressed, Helen raised a toast to Vivien gushing about how wonderful a mother she was. When Helen got emotional, Natalie stepped in and joked about Vivien’s poor cooking skills. As everyone toasted, Jake brought up his late father and Vivien tried to move things on by agreeing that he was a great father.

Vivien made a speech calling the kids the loves of her life and she thanked Mark, who continued to hand around at the other end of the balcony. Mark made a comment about Vivien’s ‘wonderful family’ and that caused a row. He swore at Jake and shoved Helen away. Jake shared his theory about Mark trying to kill his mum.

Vivien collapsed and as the kids rallied round her, Mark tried to fight his way through. That led to Jake getting punched and a scuffle breaking out. Jake accidentally pushed Mark over the balcony and Mary kicked into action making a plan to cover their tracks. She suggested they tell the police that he slipped when drunk.

Time moved forward and Vivien took her house off the market. She watched as Jake played with his kids and Lily on the beach.

In hospital Mark was fighting for his life and a nurse told the police that they couldn’t definitively say that he had been pushed. She also said the chance of him waking up was quite slim.

Mary took on the job of looking after Vivien while the family pulled together. She was back speaking to the police too and pushed the story onto Mark’s drinking to protect Jake. Her story became quite elaborate as she constructed a false version of what had happened claiming that Vivien collapsed out of shock after seeing Mark fall.

A despondent Vivien joined the family for lunch and then the action jumped back to Mary going to see if Mark was alive. She told the police she gave him mouth-to-mouth when actually she held his nose and covered his mouth to try and kill him. Even though Mary was convincing, she didn’t convince the police who rewatched her interview tape.

The police also revealed that Mark’s daughter did indeed exist and was coming to the UK to see her father.

The final scene saw Vivien leave the table and stand on the balcony looking out at the sea. As Mary said to the police she’d be there to support Vivien, Mark opened his eyes in hospital so it looks like he survived after all.

Flesh and Blood is now available to stream on the ITV Hub and is released on DVD by ITV Studios on Monday 2nd March 2020.

In this article:Flesh and Blood, ITV