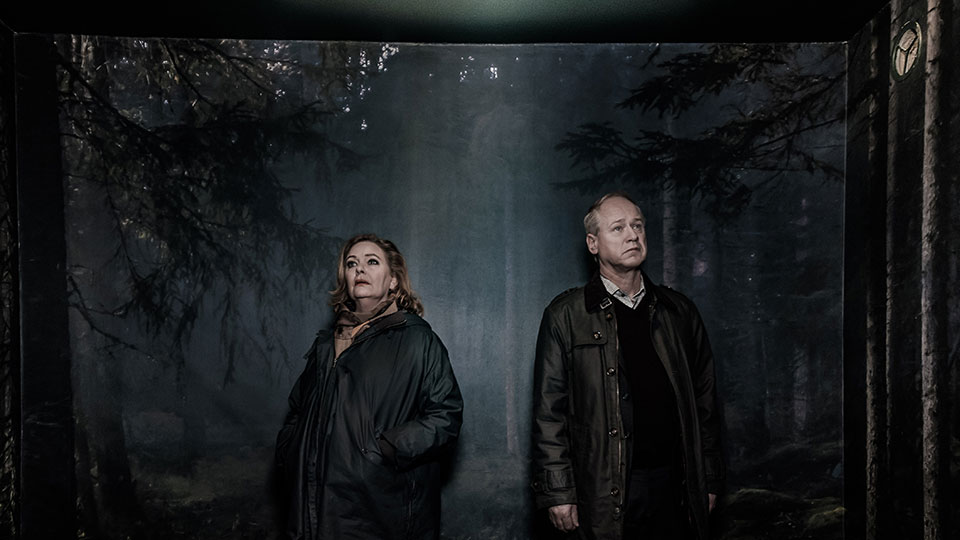 Some of the best TV drama relates to stories based on an element of fact. Two main examples on UK terrestrial TV lately – The Trial Of Christine Keeler and White House Farm – both based on actual occurrences and both hugely enjoyable. The adage of truth being stranger than fiction is very often the case.

If you want to avoid spoilers for The Truth Will Out, stop reading now.

This new Swedish 8-part drama, brought to us via Walter Presents and known as Det Som Göms I Snö in Sweden, is also inspired by a true series of events; that of Thomas Quick, a Swedish convicted serial killer who was later proved innocent. And whilst The Truth Will Out is not a direct re-telling of that specific case, the producers have taken the true crime story and weaved a fabulous whodunnit around it. The end result is typically evocative and engaging Nordic Noir.

Peter Wendel (wonderfully under-played by Swedish comedy-actor, Robert Gustafsson) has just returned to the police force after a period of illness. He is charged with forming a team to tackle cold cases; but, as one often comes to expect in a police procedural drama, that’s not as simple as it sounds. His “team” ends of being composed of individuals that other elements of the police force don’t want – an alcoholic, a snitch and a middle-aged female civilian with a dog. But this hodgepodge of misfits and ne’er-do-wells have to work together when a series of deaths suggest that a convicted killer was not the murderer people thought he was.

Roland Eklund, a criminal defence lawyer, is found stabbed to death in his car. Eklund had defended a serial killer, Klas Leven, who was convicted for his crimes. But a message left on Eklund’s body claims that Leven lied during his trial. Wendel is ordered to be involved in the investigation – but when he thinks he recognises the murder weapon used to kill Eklund and confesses that Eklund had telephoned him (apparently by accident) the day before, Wendel realises that this case has suddenly become more personal and threatening to him and his family than he could have ever imagined. Meanwhile, Peter’s ex-wife, Ann-Marie, has been promoted to work with the Justice Minister, Björn Stenius, who was involved in the convictions relating to Leven’s murders.

The pace of this show is delightfully slow. No gun-battles or fist-fights, the tension builds slowly and menacingly throughout. Much of the footage might appear mundane – Wendel wandering around his kitchen, domestic scenes with his daughter, strolling around the endless corridors of the police station – but this normality helps to create a realism that makes the violence all the more shocking when it does appear. Peter is just like us – he’s no hero or saint. His mental health issues (which seem to stem from the death of his brother) continue to challenge him, despite him trying to convince other people otherwise. This results in him occasionally losing his self-control – something that causes great concern for his daughter and ex-wife. But don’t go thinking this is a bit heavy; there are elements of levity, too – Gustafsson was apparently voted “the funniest man in Sweden” – which help to elevate the show even higher.

The end result is a hugely watchable and engaging thriller that has justifiably earned itself a second season (scheduled for 2021).

Walter Presents: The Truth Will Out premieres on Channel 4 on 11th February at 11pm. The boxset will be available on Walter Presents via All 4 immediately after transmission of first episode.

In this article:Channel 4, The Truth Will Out, Walter Presents