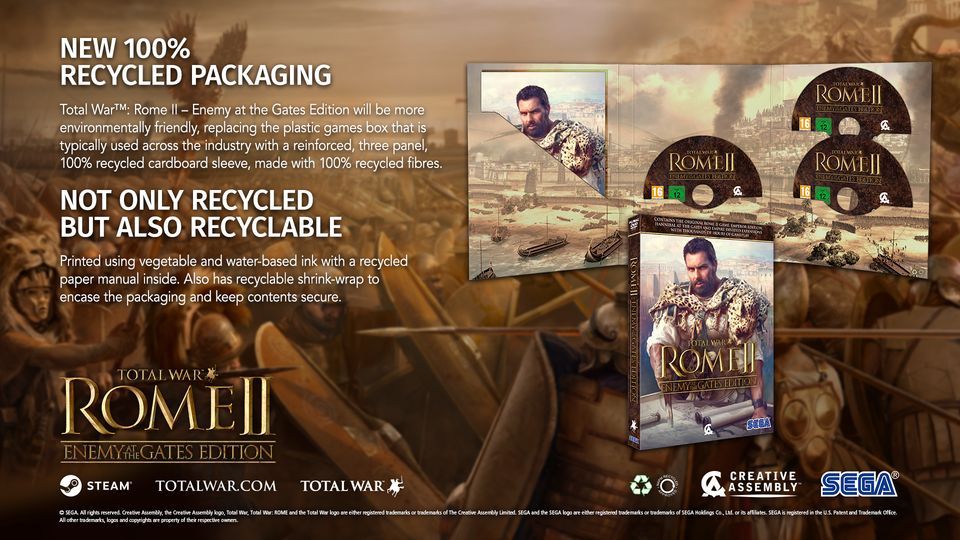 SEGA® Europe Ltd. has recently announced that it will switch to fully recyclable packaging for all its physical PC products, starting with the imminent release of Creative Assembly’s Total War: ROME II – Enemy at the Gates Edition, on 6th February 2020.

This edition will feature the Total War: ROME II along with the Hannibal at the Gates, Imperator Augustus and Empire Divided DLCs. The news follows on from the successful collaboration between SEGA Europe and Sports Interactive in November 2019, which saw the physical release of Football Manager  2020, launched in 100% recyclable packaging.

Total War: ROME II Enemy at the Gates edition will include the full base game plus the following expansion packs:

The Imperator Augustus Campaign Expansion Pack – Set in 42BC during the chaotic aftermath of Julius Caesar’s betrayal and grisly murder, the Imperator Augustus Campaign Pack puts players at the outbreak of one of the bloodiest civil wars ever fought. The republic remains whole but its soul is divided as Gaius Octavian, Marc Antony, and Lepidus – the members of the Second Triumvirate – hold the future of Rome in the palms of their hands.

The Hannibal at the Gates Campaign Expansion Pack – Dropping you into the Western Mediterranean at the outbreak of the 2nd Punic War, Hannibal at the Gates features a new campaign map focused on the period that brought the ancient-world superpowers of Rome and Carthage to all-out war. One of the most famous in history, the conflict demonstrated the tactical genius of great rival generals Scipio and Hannibal.

The Empire Divided Campaign Expansion Pack – The year is 270 AD. A string of inept emperors and usurpers vying for power has led the Roman Empire into near-total economic collapse. This is its gravest crisis yet. Eager to capitalise on Rome’s instability, barbarian tribes gather like a storm on the borders, to plunder the riches of civilisation. To the east, the Sassanids set out on a grand conquest that culminates with an assault against Roman lands.

Additionally, the Enemy at the Gates Edition includes the latest updates to the ROME II base game and DLCs from the get-go:

The Power & Politics Update – Completely overhauls ROME II’s politics system and adds a variety of new political actions for your campaign. Your party can gain influence and political support by completing missions and winning victories on the battlefield. The re-worked system enables the player to have a direct impact on campaign gameplay through their political actions.

The Ancestral Update – Introducing the fan-favourite Family Tree, the Ancestral Update offers new ways to interact with – and manipulate – the characters in your faction. This update also updates ROME II’s visuals in many areas and contains a huge number of tweaks and improvements to the core game.