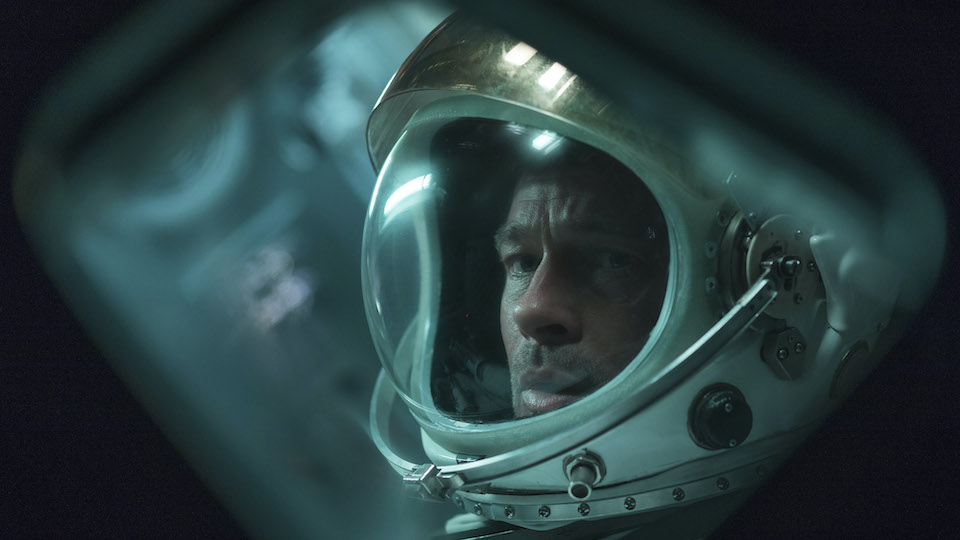 Having taken us deep into the jungles of South America on a quest for the heart of darkness in The Lost of City of Z, director James Gray is now looking to the stars, in his stunning latest film, Ad Astra. Featuring a remarkable performance from Brad Pitt, and some of the most mind-blowing visuals ever committed to the screen, this melancholic and atmospheric sci-fi drama is surely destined to be considered a classic of modern cinema.

Sharing some of the same thematic DNA with The Lost City of Z, Ad Astra is once again a story of exploration, and the great personal cost of these expeditions. Ad Astra is a film at pains to constantly remind us that humanity does not belong in space. We are simply not built to exist beyond the earth, and those that do venture outside our atmosphere must come to terms with the enormous physical and psychological toll it is going to take.

Set approximately 100-years in the future, Ad Astra follows Major Roy McBride (Pitt), a renowned astronaut in his own right, but he is famous for being the son of the legendary Clifford McBride (Tommy Lee Jones). Clifford was a pioneer of space exploration, who left Earth nearly 30-years ago as commander of the Lima Project – a mission to explore the furthest reaches of space in the search for intelligent life. The mission is presumed lost.

When a mysterious power surge hits the Earth, Roy is informed by SpaceCom (U.S. Space Command) that the surge has been linked to the Lima Project. They believe that Clifford is still alive, and whatever experiments he is conducting are causing the surges. If another of these power surges should happen, it could destroy the Earth and threaten all human life throughout the solar system. SpaceCom want to send Roy on a top-secret mission to Mars, to try and establish contact with the Lima Project.

If you’re getting strong Apocalypse Now in space vibes, then you’re not far wrong. Like Tarkovsky adapting Conrad, James Gray elegantly takes us on a poetic and contemplative journey to the heart of a dark star, where the vast and hostile emptiness of outer space, perfectly mirrors the isolation and existential crisis Roy is facing.

There are some thrilling set pieces along the way that really get your heart racing – and one in particular is so surprising and shocking it very nearly takes you out of the film – but for the most part Ad Astra is very deliberately paced. More Solaris than Event Horizon, though they cover much of the same astroturf. Rather than distract you with empty spectacle, Gray is quite comfortable to let the film ruminate on the biggest and most fundamental questions of our existence, without ever feeling the need to provide easy answers.

In the special features, Gray talks about how despite being a movie star with movie star looks and movie star charisma, Brad Pitt has never been comfortable with that side of things, and it is his conflict in trying to reckon with this that shines through in his best work. If that is the case, then it is certainly true of his work in Ad Astra.

This is Pitt’s second incredible performance of 2019, and while it’s his work in Once Upon a Time in Hollywood that is earning all the plaudits and awards, his perfectly measured turn here is just as good, if not better. Conveying so much without saying anything, or with just the tiniest perceptible movement, it is a stunning performance. Even with terrific support from the likes of Ruth Negga and Donald Sutherland, the film’s entire emotional core rests on his shoulders. And he carries it.

The Blu-ray release comes with a couple of deleted scenes which can be watched with optional commentary from the director. James Gray is an incredibly smart and articulate director, so I would recommend adjusting your audio settings accordingly.

Then we have a number of short featurettes that essentially add up to an hour long making-of documentary. First up is To the Stars, which looks at the overall production of the film, and features interviews with the main cast and creatives, along with some behind the scenes footage. A Man Named Roy is a piece about the main character, with the cast and crew talking about the character, as well as sharing their recollections of working with Brad Pitt.

The Crew of the Cepheus introduces us to the cast and characters that make up the crew of the commercial vessel that Roy travels on to get to Mars. The Art of Ad Astra is a piece about the astoundingly gorgeous visuals and exquisite production design, emphasising Gray’s vision for a wholly authentic and utilitarian vision for the future of space travel. Reach for the Stars provides some insight from the experts – real astronauts and rocket scientists who consulted on the film.

Finally, there is a feature length commentary with James Gray, and the theatrical and IMAX trailers.