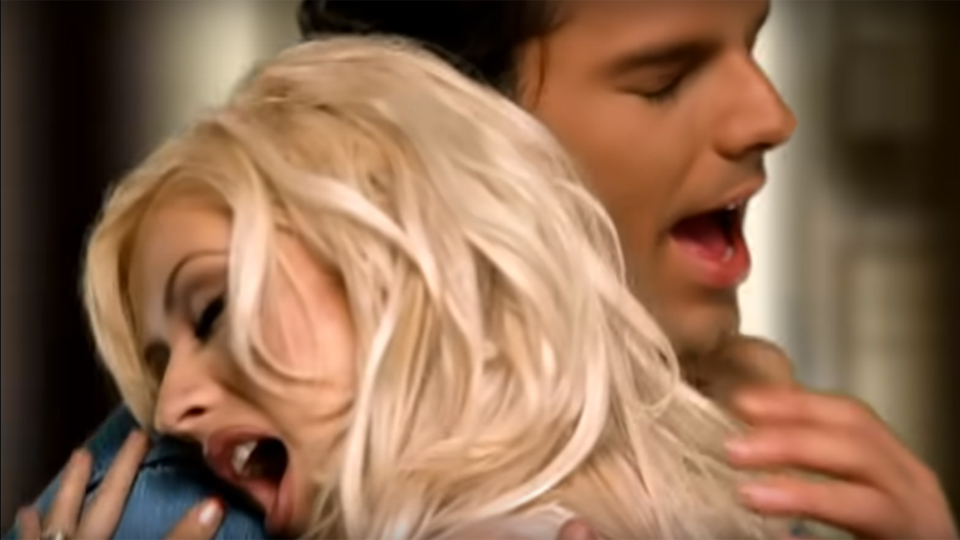 This Friday sees the release of a brand new Christina Aguilera single where she’s teamed up once again with A Great Big World on Fall on Me.  The last time she worked with the duo was on 2013’s Say Something which became a big hit across the globe.

Listen to new single Fall on Me below:

No stranger to collaborations, Christina has enjoyed some of her biggest successes through carefully selected duets.  EF now let her collaborations Fall in Line as it were, as we rank her top 10 biggest duets.  Let us know on social media @EntFocus if you agree.

It’s worth stating that we’ve focused on duets rather than tracks that feature rap verses such as Redman on Dirrty or Nicki Minaj on Woohoo as well as excluding her collaborations with The Voice contestants.

Christina guested on classical legend Andrea Bocelli’s 2006 Amore album, singing in Italian on the classical bolero which translates to It’s Impossible – not to be confused with Xtina’s own Impossible on Stripped.  Christina more than holds her own, belting out some stunning trills and riffs.

There was much controversy around Christina when she made some off the cuff comments about Lady Gaga when she was just breaking through.  Lady Gaga then went stratospheric and the media had a field day trying to create beef between the pair.  To show there really are no hard feelings, Xtina joined Lady Gaga as she performed the Do What U Want on The Voice.  Christina added her own verses to the track which was quickly made available to download and stream.  It was a real moment to see the two divas giving a show of solidarity.

2006 was a big year for Christina as alongside the aforementioned duet with Andrea Bocelli and releasing her Back To Basics album, she took things a little hip hop as she teamed up with P Diddy for the second track from his 2006 Press Play album.  It gave Christina yet another UK Top 10 hit when it became her 16th Top 20 appearance.

Tilt Ya Head came out in 2004 and perhaps gave Christina the idea for her third english language studio album Back to Basics.  Rapper Nelly plays opposite Christina as she vamps it up as a 1930s glamourpuss in the video for this bop.  She even gives What a Girl Wants chaise lounge throwbacks!

6.  Feel This Moment – with Pitbull

Say what you like about Pitbull but the man knows how to get people dancing.  Sampling A-ha’s monster 80s anthem Take on Me, Christina sounds soft and sublime as she builds the euphoric chorus and lets her voice rip.  It was a top 5 hit in the UK in 2013.

The second single from Christina’s most recent album, Liberation, it was dream-come-true time for Xtina superfan Demi Lovato as the pair try to outsing each other on this rousing track about female empowerment.  It’s full of sass and Christina’s trademark, take no shit attitude.

4. Just a Fool – with Blake Shelton

Christina goes a little bit country on this duet with fellow The Voice coach Blake Shelton from her Lotus album.  A melancholy, end of the night sitting alone at the bar type of song deals with heartbreak and disappointment.  We don’t blame Blake for not attempting the high notes in the chorus!

3. Say Something – with A Great Big World

The story goes that Christina heard the track Say Something on a US reality dance show and immediately loved it.  She quickly jumped on a new version of the track showing very restrained vocals that mirror Ian’s to create a haunting ballad.  It peaked at No.4 on both the UK and US charts.

2. Nobody Wants to be Lonely – with Ricky Martin

Looking every bit pop’s Barbie and Ken in the video, Christina teamed up with Ricky Martin for a track on his Sound Loaded album called Nobody Wants to be Lonely.  Interestingly a spanish version of the track was also recorded but Ricky didn’t ask Christina to appear on that version.  Had he not heard her Mi Reflejo album?

We very nearly didn’t put this top as there’s simply not enough Christina in the track, however it’s about quality, not quantity as what she does add really elevates the song.  Another collaboration borne out of The Voice where she coached alongside Maroon 5 lead singer Adam Levine, the funky track pays tribute to legendary Rolling Stones frontman and we defy anyone not to dance when this one plays out.

Christina Aguilera’s new single Fall on Me with A Great Big World is out now.