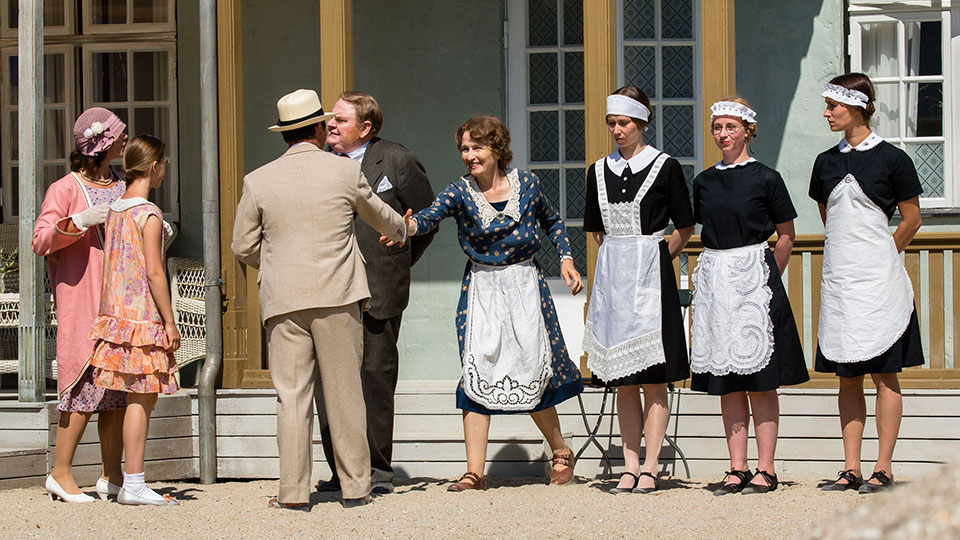 Walter Presents’ latest venture into the intriguing world of foreign drama sees it shift away from the conventional darkness of traditional, contemporary Scandinavian thrillers. Seaside Hotel (Badehotellet in Danish) is a wonderfully light, breezy tale of 1920s Denmark, set in a sleepy and remote hotel located on the beautiful shoreline and sand dunes of the North Sea.

If you want to avoid all spoilers for Seaside Hotel, stop reading this article now.

The central character is Fie (Rosalinde Mynster) – a teenage girl who leaves her widowed and sick father to seek work at an upmarket hotel on the coast. She needs employment to help pay for treatment for her dad, who has lung disease brought on by years of working at a miller. Fie is a pretty and naïve country-girl – something not lost on the creepy and cruel hotel owner (played by Ole Thestrup – who many will recognise from Borgen), who immediately promotes her to chambermaid because of her looks. But her promotion soon turns sour when other staff take umbrage at her swift rise up the ranks. And when she later gets blamed for a bizarre and hilarious situation involving undelivered eggs, dead chickens and a local farmer, she is threatened with immediate dismissal during her first week. But she survives that scare when other members of the downstairs staff threaten to leave if she’s sacked.

Elsewhere, we meet various guests at the hotel – a motley crew of philanderers, unpleasant children, disgruntled teenagers and a socially awkward Mummy’s boy. Probably the most recognisable of the cast is Bjarne Henriksen, who plays Fabrikant Otto Frigh. Bjarne is best known for his role as Theis Birk Larsen in the first season of The Killing, and also as Hans Christian Thorsen in Borgen. His presence really brings some gravitas to the production; but to be fair it’s a stellar cast, even if they’re not household names to a UK audience.

Seaside Hotel is on its sixth season in Denmark – we’re only now seeing the original 2013 six-episode series – and has been a huge success over the past six years. Shown on TV2 – one of Denmark’s major channels – it’s been the highest rated show on the channel in 22 years. Rosalinde Mynster was nominated for Best Actress at the prestigious Robert Festival (the Danish equivalent of the Oscars) for her role as Fie.

Described as Downton Abbey meets Agatha Christie, this drama is great fun – the characters are almost cartoon-like, larger than life and wonderfully uncomplex. If you’re looking for intricate plotlines and multi-faceted characterization, this isn’t for you. But if you’re up for a bit of light, comic relief – you could do an awfully lot worse.

Walter Presents: Seaside Hotel will be available to stream as a full boxset on All 4 from Friday 22nd November 2019.