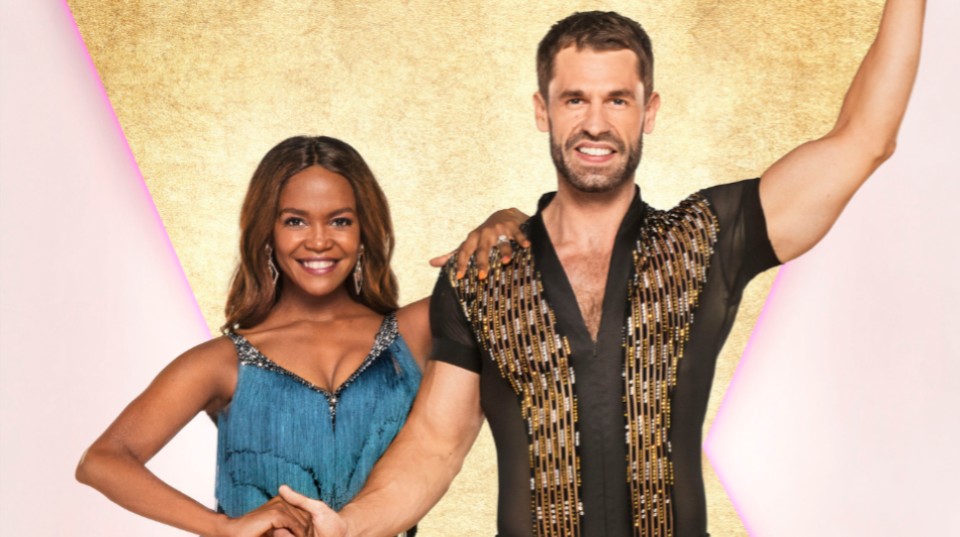 It’s that time of year when Strictly Come Dancing packs up and makes the journey north to the Home of Ballroom. That’s right – it’s the Blackpool Special!

Getting to Blackpool is considered a major milestone for many Strictly contestants and often features some of the show’s most spectacular routines. This year is no exception, with the song and dance revelations earlier this week showing the seven remaining couples had something special in store for viewers.

Sadly BBC Breakfast presenter Mike Bushell and his professional partner Katya Jones weren’t going to be joining them, after they were eliminated in last week’s dance-off against Michelle Visage and Giovanni Pernice.

Presenters Tess Daly and Claudia Winkleman were on hand to guide the contestants and viewers alike through proceedings as usual. Meanwhile, judges Craig Revel Horwood, Motsi Mabuse, Bruno Tonioli and head judges Shirley Ballas all offered their expert opinions on the evening’s routine.

So who dazzled on the Tower Ballroom dancefloor and who struggled to live up to the pressure? Read on to find out…

Chris and Karen had the honour of opening this year’s Blackpool Special with a rollercoaster-set Salsa to Uptown Funk by Mark Ronson featuring Bruno Mars. In training Craig spoke about his struggles with the Tango last week and determination to keep going, as well as wanting to bring personality to this week’s routine. He and Karen also took a tram to see Blackpool Illuminations.

The dance: This dance definitely suited Chris, giving him the chance to show off his cheeky side. I thought he had good synchronisation with Karen and plenty of swagger, and coped well with the fast-paced footwork, lifts and tricks. However I did feel the dance needed a bit more hip action and in some places it felt a little stiff. That said, he definitely brought tons of energy to his performance and it was a great start to the show.

The comments: Shirley gave it a standing ovation and said Chris ‘brought his groove’ and was ‘everything we expected’ to start the show. Bruno thought it was ‘infectious fun’, particularly singling out Chris’ hip-hop moves and that his hips are starting to ‘unclog’. Craig felt it lacked flow, but the timing ‘wasn’t bad’ – Chris has upped his game. Motsi liked Chris’ confidence in his performance, calling the dance ‘fun’ and ‘energetic’.

This week Emma was back in Ballroom mode, with her and Anton performing an American Smooth routine to Ella Fitzgerald’s version of Let’s Face The Music And Dance. In training Emma spoke about how much she loved last week’s Couple’s Choice dance and her shock at getting a 9, whilst she and Anton went to the top of Blackpool Tower and also practised their routine in the Winter Gardens.

The dance: This was a classy and confident routine from Emma, with some lovely details and lines in her arms and hands in particular. I thought she moved across the floor really nicely and had some nice jazzy touches too, as well as great synchronisation and confidence in the tricks. There are still a couple of issues with her posture and at times it looked like she was clinging to Anton a bit, as well as her slightly forced-looking facial expression, but overall this was a strong routine with all the magic of a Hollywood movie.

The comments: Bruno called it ‘glamorous, glossy, classy, sophisticated’ and said Emma had the character of a 1940s movie queen. Craig praised Emma’s ‘beautiful’ movement around the floor and ‘fantastic’ lines, but said her face only had one expression. Motsi thought the dance was ‘amazing’ and that Emma looked light as a feather in the lifts, as well as the partnership between her and Anton. Shirley said Emma covered everything, with lovely footwork and gorgeous pivots, and that it was by far her best dance.

This week Alex and Neil performed a Paso Doble to Beyonce’s Run The World (Girls). We’ve seen some legendary Pasos in Blackpool in the past – could this be another one for the history books? In training Alex spoke about how much she’s grown in confidence and enjoying learning to dance, as well as the challenge of taking on a more serious, fierce character for the Paso.

The dance: Alex started the dance strongly, with sharp staccato movements and great hand movements and cape work. She certainly brought plenty of fire, drama and sass to the dancefloor and I liked seeing a different side of her character. However for me the foot work was a little skippy in places and I would have liked to see her drive into the floor more, but she had some good lines and I thought she coped well with the solo sections too. It’s clear she absolutely loves being on Strictly and she’s getting better every week – at this rate, she could potentially win the whole thing.

The comments: Craig said it was powerful and theatrical with a modern take. Motsi loved how Alex let go and attacked the dance, despite making some mistakes. Shirley thought it was a pure girl Paso and that Alex held her own with the professionals, praising her twist turns, footwork and fall away reverse. Bruno compared Alex to the Queen of Sheba, calling it ‘amazing’.

Fan favourites Kelvin and Oti took on the Jive this week, dancing to the classic Jailhouse Rock from Smokey Joe’s Cafe. In training Kelvin spoke about how much he liked the fun and energy of the dance, as well as his childhood memories of Blackpool. He and Oti also brought his nan to see the Tower Ballroom and performed a bit of their routine for her.

The dance: I loved how Kelvin got into the character of the dance from the off – he acted it really well. I also liked his sharp kicks and flicks as well as his hip action and thought he pulled off the flash of the tricks incredibly well, with great timing throughout and nice control in the spins. The one thing I might have liked was a little more drive into the floor, but overall this was a clean, precise Jive with bags of energy and some great rock and roll flair that showed why he’s still the hot favourite to win Strictly Come Dancing 2019.

The comments: Motsi said Kelvin ‘made [her] life’, particularly singling out his pendulum chassis and energy. Shirley was speechless – Kelvin’s co-ordination was superb and he had great action and control. Bruno found Kelvin guilty of a Jive of the first degree, calling it ‘professional standard’. Craig said the chassis could have been a bit lighter, but liked Kelvin’s strength, stamina and agility, saying it was ‘formidable’.

This week Saffron and AJ performed a Quickstep to Beverley Knight’s Marvellous Party. In training Saffron spoke about her joy at scoring 39 points last week for her Waltz, as well as her determination to go over and over this week’s routine to get the steps right and hoping the nerves wouldn’t get the better of her.

The dance: Saffron brought the jazzy 1920s vibes to the routine from the off, as well as having a lovely lightness across the floor and great footwork. I thought she had great synchronisation with AJ in the side-by-side sections as well as good posture in hold and a very nice top line, as well as showing off her sassy side in the routine too. It was definitely a different performance from her but another strong dance and I think she’s excelling in the Ballroom routines in particular.

The comments: Shirley said Saffron put the quick in Quickstep and thought she coped well with the shifts in body weight and changes of speed, but made a couple of little missteps. Bruno felt it captured the spirit of the Jazz Age and called it brilliant. Craig thought Saffron’s left elbow dragged towards the end, but loved the routine overall. Motsi liked Saffron’s boldness and energy and said she looks like a Ballroom queen.

Michelle’s Strictly journey has been more of a rollercoaster than The Big One, from the top of the leaderboard to the bottom two last week. After surviving the dance-off, could she and Giovanni get back on top with their Couple’s Choice Street/Commercial routine to Madonna’s hit Vogue? In training Michelle spoke emotionally about what Vogueing means to her as well as receiving messages of support from her daughters. She and Giovanni also went to the legendary drag show Funny Girls to meet some of the cast members.

The dance: Dressed as an 18th century lady, Michelle brought bags of sass and flair to the dancefloor, with sharp, clean lines in her Vogueing and nice synchronisation with Giovanni. I thought she captured the style really well and there was an elegance about her performance that I liked too. Perhaps it wasn’t quite as dramatic and impactful as some of the other performances, but I thought it was well executed and you could tell it meant a lot to her.

The comments: Bruno said ‘the house of Michelle rules’ and it was a great tribute to Madonna. Craig thought there needed to be a little more definition but loved the high stylisation and the sentiment. Motsi felt Michelle’s face was ‘on’ and praised the message behind the dance. Shirley liked how Michelle used the music to its fullest, calling it ‘a spectactle of armography’, and praising the attitude and detail.

Closing the show were Karim and Amy with their Charleston to Happy by C2C featuring Derek Martin. In training Karim spoke about being disappointed with the mistakes he made in last week’s routine and having a lot to prove this week, as well as wanting to move forward and put on a good performance. He and Amy also took on some games in Blackpool’s arcades.

The dance: The routine started with Karim descending from a ‘grabber’ machine (as you do) before launching into the high-energy dance. It was a lively performance with plenty of tricks and a great sense of fun and cheekiness which I thought really suited Karim’s personality. I was also seriously impressed with him doing the splits! He handled the lifts really well and I thought he had nice synchronisation with Amy too. For me it was a little messy in places, especially his hands and feet, but overall I felt he really captured the spirit of the dance and it was a great way to finish the night.

The comments: Craig said it was clean, sharp, precise and ‘absolutely brilliant’. Motsi was speechless and thought Karim ‘killed it’. Shirley said it was absolutely flawless and Karim looked like a professional and a star. Bruno thought the routine proved why Karim reminded him of a young Gene Kelly.

Strictly Come Dancing will return for the Results Show on Sunday 17th November at 7.15 pm on BBC One.