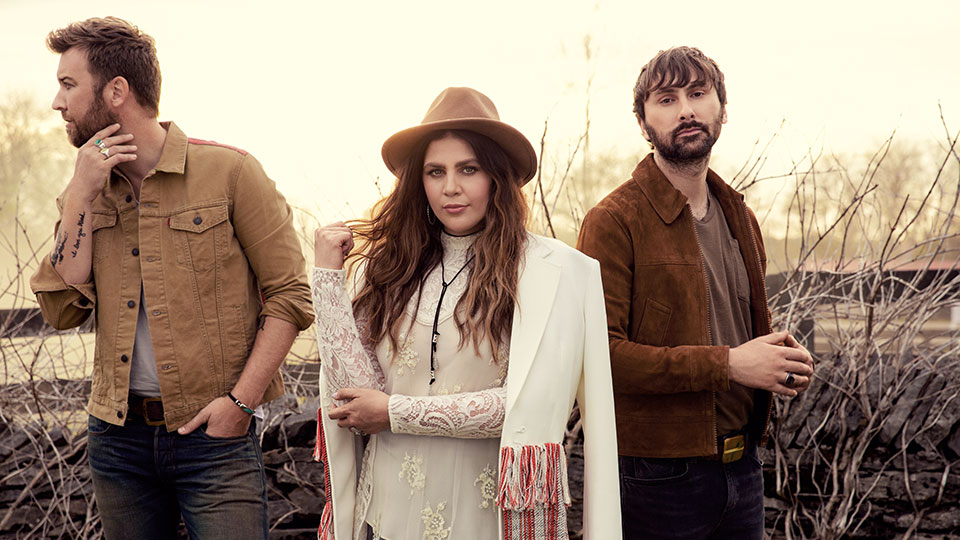 Having been with Capitol Nashville since the release of their self-titled debut album, it came as a surprise when Lady Antebellum left their long-time label home and signed with Big Machine Records in 2018. The group experienced a steady decline in sales since the release of 2013’s Golden and their 2017 album Heart Break was their lowest-selling to date. After taking a little time apart and regrouping, Lady Antebellum set about work on new album Ocean, their first for their new label home.

UK fans were treated to previews of two songs – What If I Never Get Over You and Be Patient With My Love – when Lady Antebellum performed at C2C: Country to Country back in March. Both songs suggested that Ocean was going to be a deeper dive lyrically than we’d heard from the group before and the Lady A magic seemed to be back. Teaming up with producer Dann Huff, who they’ve previously not worked with, Ocean is a definite return to form and it capitalises on the excitement created by the songs already unveiled from the project.

Of the 13 tracks, the members of Lady Antebellum – Hillary Scott, Charles Kelley and Dave Haywood – have co-written on 7 of the 13 tracks in various combinations or solo with the help of additional co-writers. What’s always interesting about Lady A is that they can sell whatever they sing so if you don’t look at the credits, it would be a hard task to identify which ones they wrote and which they didn’t. Lead single What If I Never Get Over You, written by Sam Ellis, Ryan Hurd, Laura Veltz and Jon Green, sounds like classic Lady A and it plays to all their strengths. The exchanges between Scott and Kelley are at the heart of the song and the harmonies on the chorus are too die for.

The order of the day for Ocean is variety and it’s the most cohesive and enjoyable record the trio has ever released. The sequencing is perfect and the album gets better and better with each listen. The wistful Pictures is thought-provoking and emotive, Crazy Love sounds like a lost gem from the band’s early albums, and You Can Do You picks up the tempo for what’s sure to become a live favourite. Be Patient With My Love, a song that wowed me at C2C, is the centre point of the record and one of the highlights. Kelley co-wrote this one and he doesn’t shy away from acknowledging poor behaviour on his part while thanking his wife for her patience. It’s moving, it’s beautiful and it’s surprisingly raw. In other words, it’s classic Lady A.

Elsewhere on the record a banjo riff leads to a sing-a-long chorus on the pop-leaning Alright, Let It Be Love showcases those powerful harmonies the band is known for, and Boots sees the trio letting their hair down with a rockier edge. On a Night Like This is one of two stripped-down moments on the record, the other being the title track Ocean. It sounds like a Christmas song to my ears and it’s simply stunning. Little Big Town appear on The Thing That Wrecks You, a song co-written by Tenille Townes, and it’s the super group I never knew I needed in my life. No bands do harmonies like Lady A and Little Big Town so when you put them together it’s pretty epic. When they all sing together, the song kicks up a gear and it’s a truly special moment on the record.

Closing with title track Ocean, the album ends strong. Scott’s vocal on the piano ballad is the best I’ve ever heard her. She digs deep to pull out the emotion of the song and you can’t help but feel a little overcome with emotion at the urgency in her voice on the chorus. There’s also a little rasp in places that adds to the rawness of the song.

For me, Lady Antebellum have always been more of a singles band than an albums band. Don’t get me wrong, I’ve always been a fan of the band but until Ocean, I’ve never found one of their albums that I haven’t skipped at least a couple of tracks on. With their new label home and a deeper dive into the writing and song choices, Lady Antebellum have reignited that spark and magic that made them so special in the first place. Without a doubt Ocean is the best album they’ve ever released and it has me excited about where they can go from here.