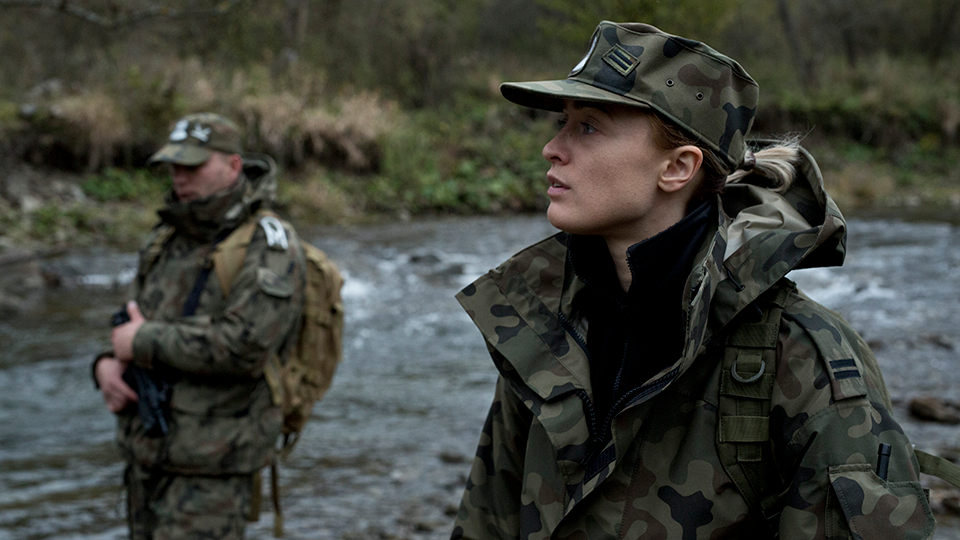 This is the second series of the Polish thriller set in the beautifully bleak surroundings of the Bieszczady Mountains – a range that runs from south-east Poland and north-east Slovakia to western Ukraine. It features the border guards in the region of Poland known as Podkarpackie Voivodeship, and in particular the exploits of Captain Wiktor Rebrow (Leszek Lichota – a renowned Polish actor, best known for his performances in the soap opera, Na Wspólnej).

If you want to avoid all spoilers, we suggest you stop reading now.

At the end of series one, Rebrow went into hiding following his wrongful arrest for the murder of his girlfriend and colleagues. Escaping to the vast forests on the Polish/Ukrainian border, he’s living the life of a hermit until an illegal immigrant – Alsu – stumbles across his hiding place. Rebrow discovers that her son, who she’s left hidden in the forest, is ill. He risks his own safety to rescue the boy and get medication to treat his illness.

Four years on from the events of season one, people trafficking at the border is rife. Hundreds of people – men, women and children – are fleeing Eastern Europe and the Middle East, making their way through the mountains and eventually on to Germany. With the heightened trafficking, the border guards who watch this area known as the “green border” increase their patrols of the forest. It’s here that they made a grisly discovery in a disused mining kiln.

Prosecutor Iga Dobosz (Aleksandra Poplawska), fresh from failing to get a conviction in a high-profile rape case, is ordered to return to Podkarpackie to investigate this new case, much against her wishes. She discovers that the crime at the kiln is probably related to the capture of illegal immigrants a few days previously, and starts to investigate further into the people-trafficking trade – risking her own safety in doing so.

The setting for this high quality Polish drama – Wataha in its original language – is the real draw here. You can almost smell the pine trees and damp, mossy air. It’s gritty and earthy, with a menacing soundtrack that adds to the agoraphobic ambience of the vast mountainous forest.

The acting is of a high standard throughout – Poplawska as the chain-smoking prosecutor is particularly good; and the production quality (it’s an HBO Europe production) is top drawer. You’d probably be advised to check out season one first before jumping into this follow-up, as there are a number of threads to the storyline that would benefit from knowing the backstories that got us to where we are now. But it certainly stands up on its own merit.

Once again, Walter Presents offers up a fascinating thriller from overseas for us to binge on during these dark autumnal nights.