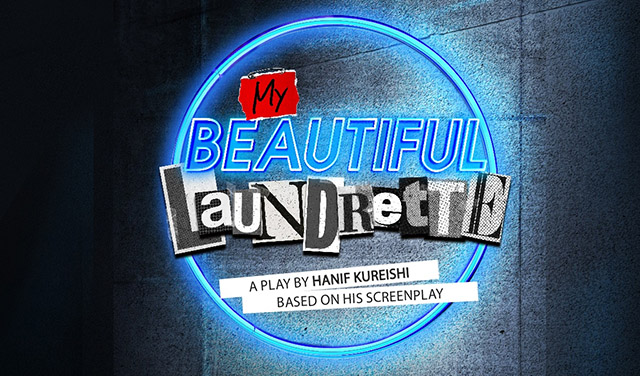 My Beautiful Laundrette was a game-changing movie for cast and creator when it first appeared in 1985. Telling the story of an interracial gay relationship against the backdrop of Thatcher’s free-market Britain, it courted both acclaim and controversy.

35 years on and a stage adaptation arrives at the newly-redeveloped Leeds Playhouse, but does the Eighties polemic have the ability to make quite the same impact?

In short, yes and no. Hanif Kureshi’s writing unpacks the complexities of British immigrant identities that still apply today, even though the political landscape feels like another world.

The play explores the tensions and rationale between Pakistani communities and the new fascists, and you’d think this would be as simple as left vs. right in the current party political model, but not so in Thatcher’s Britain: The Iron Lady’s free-market policy provided some real opportunities for many immigrant families, but envious National Front protestors saw her Laissez-faire policy as the grounds for their own poverty. And as history has told us more than once, in hard times prosperous immigrant families often become targeted by furiously disillusioned extremists.

Like an urban Romeo and Juliet, Kurehsi presents these tensions in the physical form of a couple born on both sides of the battle: Omar is a late-starting but aspiring young businessman, and Johnny is his ex-bully from school with old ties to fascism. Between them, they grow an unlikely business in the form of a launderette and begin a love affair, yet the cultural barriers and social unrest presents more than a little resistance to their utopia.

The brilliance of the writing is that it’s not all a one-way road: Kureshi is damning of religion’s dominance in Pakistan and in praise of Britain’s comparative freedoms. Yet the influence of Western values on ancient Eastern traditions, such as arranged marriages, are ambiguously explored and offer no firm resolution – there isn’t an easy one – but poignantly illustrates the conflict between cherished customs, new values and conflicting identities.

At its core, Omar and Johnny’s relationship is sensitively realised by Omar Malik and Jonny Fines. Whilst the writing implies a form of sexual tension from the off, Malik and Fines carefully play it down and assemble the attraction in a natural, even comically-clumsy way, which feels remarkably real. The dynamic is almost childish in its innocence and provides a vivid contrast to the furious and aggressive attitudes of family elders and the National Front.

Kammy Darweish also hands over a captivating performance as Uncle Nasser, the bullish hedonist who relishes in Western iniquity but extols Eastern promise. There’s always something absurd about a hypocrite full of hot air, and Darweish blows just enough of it to make the character amusing whilst pitifully conflicted in the same breath.

Special note must also go to Balvinder Sopal, who I’m constantly drawn to in every performance. Here she plays mother and thug in quick succession, demonstrating a snap-fast range. Sopal also has a quality which is occasionally missing in new theatre: the confidence to dial down and pitch a performance with a real-world, naturalistic quality. Never just acting; always being the person.

Nikolai Foster’s version for stage is a visually dynamic and beautifully designed affair, which at times feels more like a musical staging than a drama. Neon lighting with up-tempo interludes from the Pet Shop Boys helps bracket the play’s filmic style and period setting, and for the most part the transfer from screen to stage is robust and authentic.

The only issue is the play’s pacing, which is approximately 40 minutes longer than its screen version. The second act feels baggy and overwritten, with a resolution that would benefit from a fearless edit. Where our characters end up doesn’t seem to be that important to me – it’s the fact they come together against such adversity which is the key point. As such, the closure feels needlessly drawn out.

My Beautiful Laundrette is in many ways a terrific play drawn from groundbreaking material. But it’s also a product of its time, with some messaging which now seems wincingly blunt and on the nose. But that’s the price we pay for real progress. As a yardstick of where we’ve come, My Beautiful Laundrette helps show us the great distance traveled as a diverse nation, whilst reminding us of some of the hard road which still lies ahead.