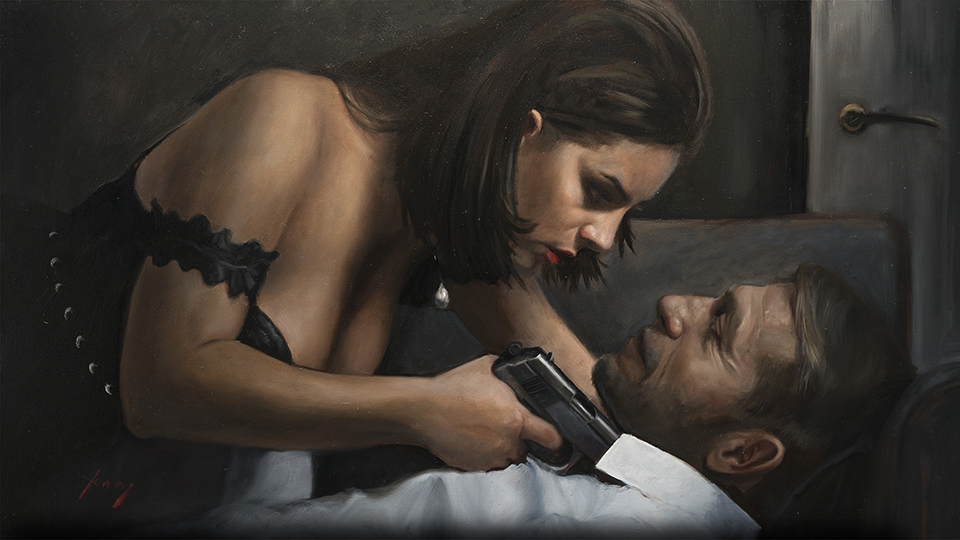 Vincent Kamp has created a new exhibit based on his own short film Queen of Diamonds.

Influenced by the work of film directors and cinematographers, and fascinated by the underground world of urban subcultures, Kamp’s latest exhibition at Clarendon Fine Art Mayfair features a series of new paintings based on Queen of Diamonds.

The short film is a collaboration with acclaimed director Naeem Mahmood (Brash Young Turks) and stars Georgia May Foote (Corona on Street), Tamer Hussan (Layer Cake), Leo Gregory (Once Upon a Time in London) and Samuel Anderson (The History Boys). Watch the trailer:

Kamp explains, “I like to capture a moment of high tension, always imagining there’s something surreptitious going on in what could be a perfectly innocent situation. I made this film to show how I visualise the story before I tell it with paint. My paintings have always been inspired by cinematographers and I felt it was time to take that creative influence to the next level”.

Queen of Diamonds is a thriller that follows an audacious plot to rob an international diamond trader and will be screened as part of the exhibition.

The exhibition and film will be at Clarendon Fine Art, Mayfair, 46 Dover Street, London W1S 4FF from 12th September 2019.

Advertisement. Scroll to continue reading.
In this article:Vincent Kamp