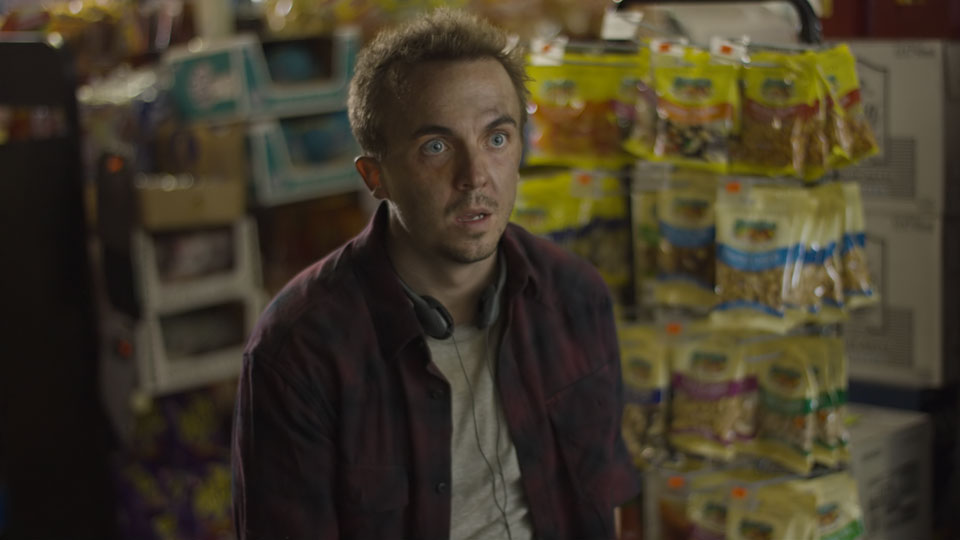 Jonathan (Frankie Muniz) works in a liquor store and doesn’t have much of a life outside of his job. Egged on by his co-worker and friend Eric (Blake Webb), Jonathan calls a dating line and meets up with the beautiful and mysterious Dena (Chelsea Edmundson). Against his gut instinct, Jonathan invites Dena back to his place and the two hook-up. The next morning Dena’s gone and Jonathan has a nasty blistering rash that looks suspiciously like an STD. As Jonathan tries to find Dena, he’s plunged into a world of paranoia leaving his friends and family thinking he’s going crazy.

Director/co-writer Brian Hanson and co-writer Richard Handley (who also stars as Dr. Ronaldi and is the film’s lead producer) have crafted an intriguing mystery with The Black String that takes its time to unravel while keeping the audience hooked for the ride. Once the set-up is out the way, the film takes the viewer on a fun ride as they, along with Jonathan, try to figure out what on earth’s going on. Jonathan has his version of the events that unfold while the people around him worry that he’s losing his mind. Unable to trust anyone in his life, Jonathan seeks out psychic Ms. Melinda (Mary K. DeVault) to try and help him understand what’s happening.

Part of the fun of The Black String is that you, like the family and friends in Jonathan’s life, aren’t always sure what to believe. While they are quick to dismiss him and get him institutionalised, you are given a more sympathetic insight into Jonathan’s life. His loneliness and dissatisfaction with his life led to him calling the dating line and that’s where his problems begin to exacerbate and spiral out of control.

Frankie Muniz gives a very strong lead performance. It’s nice to see him doing something very different to the work we’ve seen before but he does manage to incorporate some of his comedy background into his work here. He’s a very endearing lead and you’re happy to go along on the journey with him. Also worthy of a mention here is Blake Webb as Jonathan’s stoner friend and co-worker. He takes a small role and knocks it out of the park, bringing energy to the screen and a memorable performance.

The Black String suffers from being a little overly long. In the last 30 minutes it’s a little more repetitive than it needed to be and that does bring the enjoyment of the film down a bit. Had it been just that bit tighter, the film would have been even stronger. It’s a minor complain really but one worth stating.

If you like your horrors to be driven by a mystery then there’s a lot you’ll like about The Black String. Fans of Muniz will appreciate seeing him on the big screen and giving such a great performance, and it’s definitely a good role for him. At times the plot is a little messy but there’s enough going on to keep you hooked until the very end, which actually manages to deliver a surprise or two. The Black String may not be perfect but it’s a perfectly enjoyable watch.