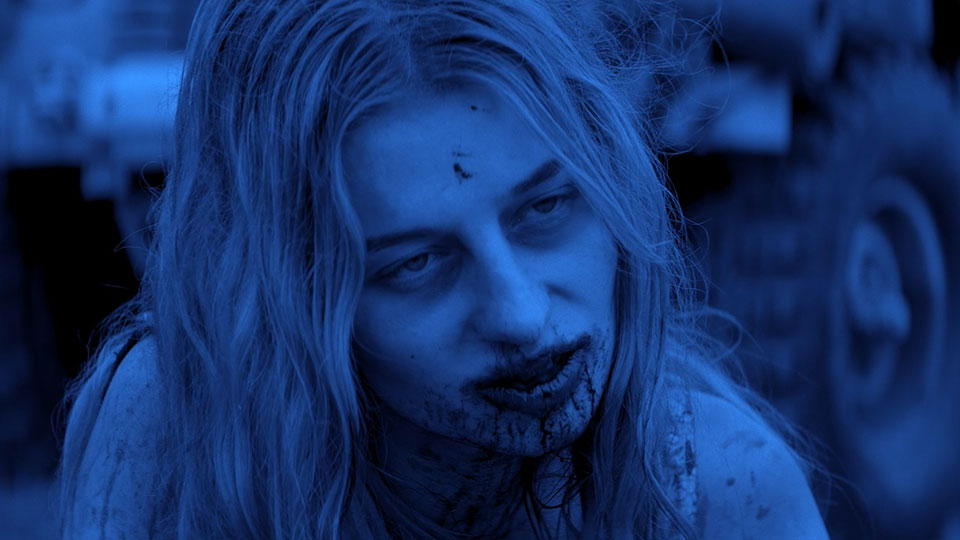 Will Stanton (Shayne Ward) leads a group of mercenaries on a mission in Eastern Europe to retrieve intel during a civil war. With strict orders to kill everyone they find, the team murders a civilian prisoner and does nothing as innocent people are slain. Returning to their base following the mission, the team find themselves trapped on a never-ending stairwell where they are forced to climb or be killed.

Writer/director Tom Paton returns to Arrow Video FrightFest for another year following last year’s well-received Black Site. The British film-maker continues his trend of making ambitious films on modest budgets and Stairs could be his best work yet. Mixing elements of action, science-fiction and horror, Stairs builds on the solid foundations of Paton’s previous work, while taking him into new territory.

Stairs takes a little time to get going as the initial set-up is key to rest of the film but once that’s out of the way, the film begins to find its feet. The rag-tag group of mercenaries are introduced with headstrong Stanton, cautious Kia Clarke (Samantha Schnitzler) and gung-ho Ben Garrett (Bentley Kalu) among the characters that make a strong impression. The first half an hour is actually quite brutal in places, capturing the brutality that mercenaries are required to carry out and witness.

Once the group reaches the stairwell, the horror elements kick in as they are seemingly chased by an unknown presence. Each time an alarm rings, the group is forced to carry climbing otherwise they have to face up to horrors from their pasts. It’s an interesting plot dynamic and it works well in terms of slowly increasing the tension. The why of their situation is linked to the opening sequences and without saying too much, the team finds themselves in a Groundhog Day-style scenario as they furiously battle to make it out alive.

Performance wise the cast does a good job. Shayne Ward, who is the biggest name here, has been cutting his acting teeth of Coronation Street but this role requires something different from him. He rises to the challenge of playing a more aggressive character and for the most part he’s very convincing. Samantha Schnitzler, who I didn’t love in Black Site, steps up her game here and turns in a much more nuanced and solid performance. Also of note is Bentley Kalu as Garrett and Toby Osmond as Jack Ford. They provide great support for the leads and steal a few scenes here and there.

There are some issues with Stairs. I found that its 100-minute run-time was actually a little too long. Had it been trimmed down to 80-minutes, the pace would have been tighter and there would have been less room for repetitive scenes. To be honest, it’s not an uncommon problem to find with films where characters relive moments over and over.

On the plus side the direction is tight, the script is solid and the use of lighting seriously impressive. Paton gives the film a very distinctive visual style, which you could say has taken some inspiration from Dario Argento, and it’s a very nice-looking film to watch.

For me, Stairs is a stronger film than Black Site. The cast works better together and it executes an interesting concept well. Aside from the quibbles I’ve outlined, I mostly enjoyed it and Paton continues to establish himself as a credible and exciting voice in the genre. There are a few jump scares to be had and some great fight scenes, adding to the overall enjoyment of the film. With two more films in the works, Paton isn’t slowing down and I look forward to seeing what he does next.