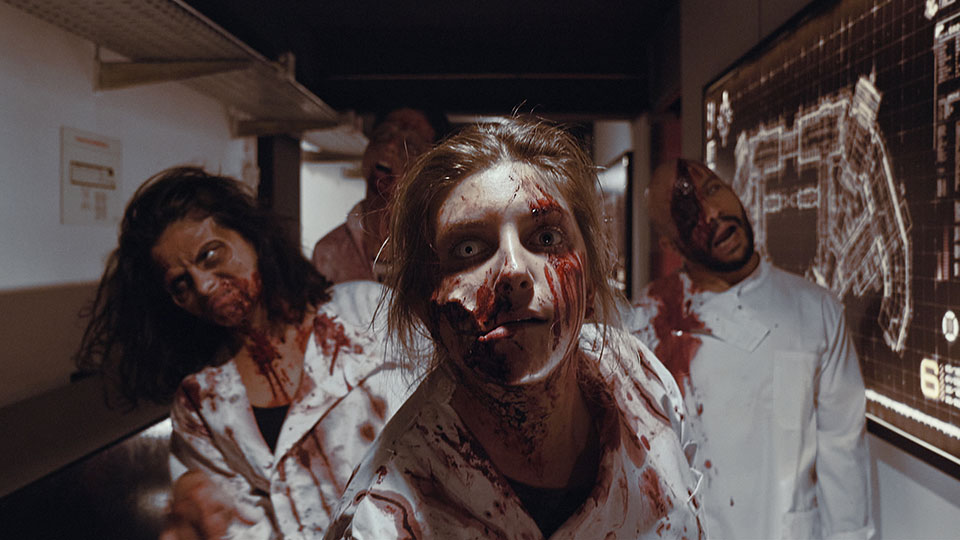 Soldier Maria (Maria Leite) and superhuman strongman TS-347 (Joaquim Guerreiro) try to make a getaway from a military cell responsible for causing a zombie outbreak through their scientific experiments. They run into hapless and hungover Pedro (Pedro Barão Dias), who threw a party the night before that ended with all of his friends being turned into zombies. When TS-347 accidentally gets killed, Maria and Pedro are forced to team up so they can get to a safe place but their plans are derailed by a nuclear bomb.

Mutant Blast comes from the infamous Troma Entertainment, the US independent film production and distribution company, known for their outrageous but hugely entertaining B-movies. If you’ve ever seen one of their films, you’ll know what to expect from Mutant Blast and believe me when I say it’s a pretty wild ride. Writer/director Fernando Alle starts the film channelling Terminator but soon enough he takes the audience on a bonkers journey that will leave you exhilarated, hugely entertained and splitting your sides with laughter.

Everything about Mutant Blast is over-the-top and that’s what it makes it so magnificent. Ever wanted to see a human-sized lobster with a hatred of dolphins dropping f-bombs like they going out of fashion? Or maybe you feel that your life has been missing a character whose hand falls off and is replaced by a killer rat? Well if either of those things appeal to you, Mutant Blast is definitely your new favourite movie.

Holding together all of the chaos is Maria Leite and Pedro Barão Dias as the central characters Maria and Pedro, fumbling their way through one disaster after another including the unexpected after-effects of a nuclear bomb. Both actors have a brilliant knack for comedy and Leite is incredibly convincing as a kick-ass soldier. They have wonderful chemistry together and the way they bounce off one another is one of the best things about the film. Barão Dias plays Pedro as a bit of a useless loser but somehow you feel sympathetic and warm towards him, and by the end of the film you might be a little bit in love with him.

The practical effects are fantastic. They really fit in with the overall style of the film and there’s more blood and guts than you can shake a stick at. It really is a very impressive production and the make-up department deserves a huge round of applause. I also liked how when the characters said the word ‘zombie’ it was censored in the sub-titles and bleeped out from the audio track, paying a knowing nod to the copious amounts of zombie films out there.

The best way to experience Mutant Blast is to go in cold; know as little about it as humanly possible and let yourself go along for the ride. You can turn your brain off, or at least put it into neutral, and just have an absolute blast (no pun intended). Mutant Blast is pure escapist fun from start to finish and it’s the kind of film that’ll go down in FrightFest legend.