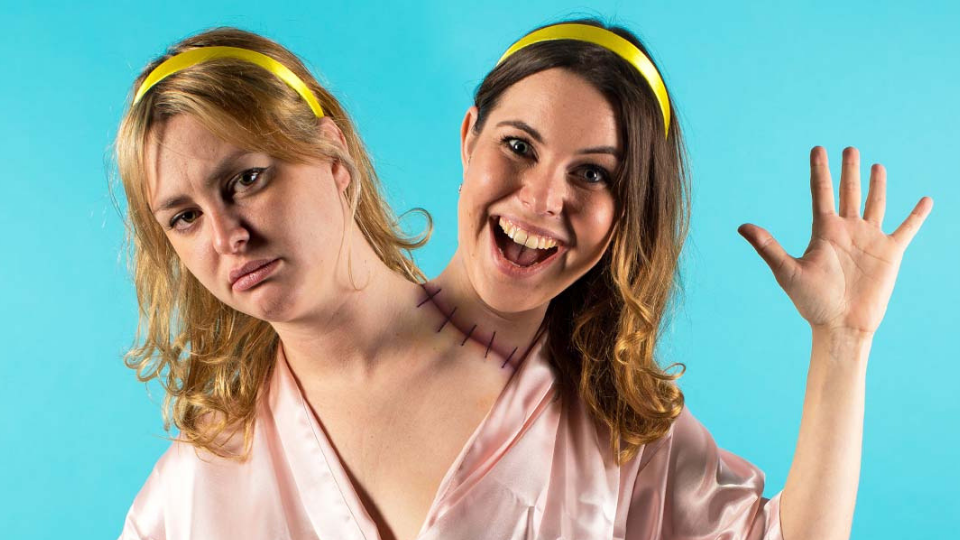 Rising stars, cult comedy heroes and IRL sisters Maddy and Marina Bye have returned to the fringe with an anarchic, absurd and evolved show The Siblinginging that is riskier than standing near the big tin cow’s underbelly in a 24-hour thunderstorm.

With the focus firmly on establishing yet more surreal characters, the pair manage to layer completely unique, subversive and at times thrillingly disturbing characters into completely absurd yet familiar scenarios. They then playfully release their creations to roam free among the audience’s psyche, refining improvised moments with purpose, providing exciting pivots throughout.

The work still has the signature Siblings relationship hallmark, but this time it feels different, more underpinning, more relentless and subversive, as the pair use the push and pull of their personalities and characters create an on-stage alchemy that is compelling and executed with unrivalled comic timing. The cohesion and energy of the show is a kaleidoscopic fever-dream propelled by their respective clowning and classical training and top tier writing that provides a relentless rhythm.

With too many highlights to mention, there are surreal yet familiar sketches that are verging on performance art – whether its the stunt man instructor trying to film and teach his craft with grave consequences, or, the American audience members who don’t love eating turkey as much as their friend Harry. The show pulls together as much more than the sum of its parts. The short play sketch based at the fictional ‘Roosters Gooch’ fringe venue saw the performers confidently control the energy of the room, with the sketch also providing a profound satirical take on producing a show at the fringe as a social commentary on its seismic growth, its pitfalls and what it means to perform there. Rest assured, Siblings: The Siblinginging is revolutionising(inging) comedy and safeguarding(inging) the future of the fringe(inging).

Siblings: The Siblinging runs until 26 August (not 14th) at The Underbelly, George Square (The Wee Coo) at 18:40. For more information, visit https://tickets.edfringe.com/whats-on/siblings-the-siblinginging