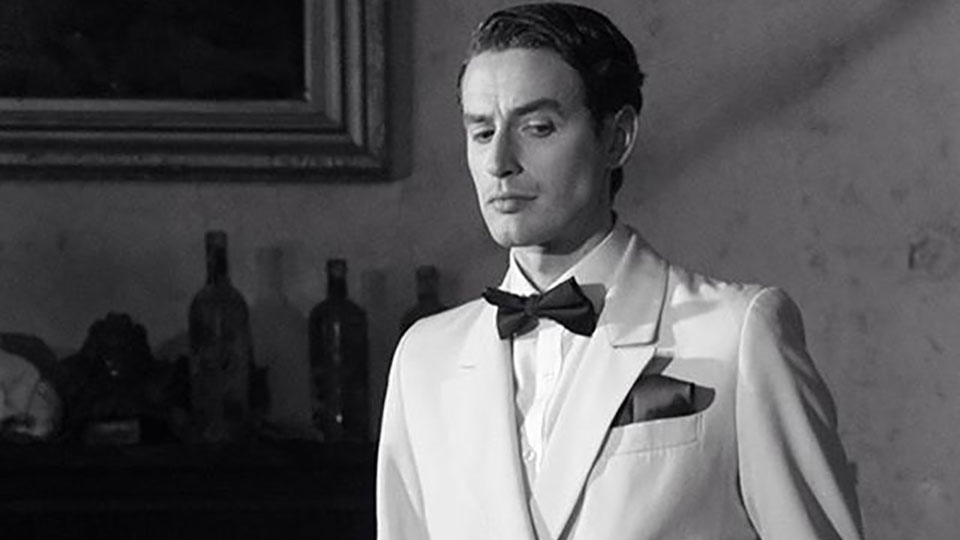 Renouf is now starring in film-maker Jack McHenry‘s black-and-white mystery/horror romp Here Comes Hell, which screened at Arrow Video FrightFest Glasgow earlier this year. The film proved so popular, it’s part of the slate for next month’s London FrightFest so there’s a chance to catch it if you couldn’t make it to Glasgow.

I caught up with Tim to talk about the film, discuss his standout performance, and find out where his impeccable comedic timing comes from…

Hi Tim. How are you today and where does this Q&A find you?

Hey – I’m good thanks! You find me on a rather grim rainy day in east London, sitting in a cafe (it’s all very tragically cliched) near to where I live in Dalston (again – sorry) attempting to learn my lines / answer emails / people watch / procrastinate and delve further into my ever-depleting overdraft investing in overpriced coffee and pretentious food…so you’ve actually caught me at a very good time.

You’re one of the stars of Here Comes Hell, which is screening at Arrow Video FrightFest in August. What’s the film all about?

haha…right so that’s an interesting, and complicated question. I’ll try to keep my answer brief… Here Comes Hell is a genre-splicing black-and-white horroredy set in the 1930s about a group of reunited friends who host a seance and in doing so, invite the evil spirit of a previous resident to come and terrorise them until, and if you’ll excuse the pun, all hell literally breaks loose.

The film screened at Arrow Video FrightFest Glasgow earlier this year. What’s the reaction been like from audiences?

The reaction so far has been brilliant – it’s such a fun movie, which was made with so much love and passion by all those involved. We had a blast making it and I really feel like all this comes across in the film – the audience really seem to get it – and there’s a lot going on! So it’s a relief that they’re ‘in on the joke’.

For me, your performance is one of the standouts in the film. Tell us a little bit about the character of Freddie and what attracted you to the part?

Haha I don’t know about that! That’s very generous of you. I’m apparently drawn to quite dick-ish characters?! Or perhaps more typecast you may say. Errr – I just find them extremely fun to play. I love someone with a bit of a hard edge and I like to combine that with a lot of silliness. Freddie in particular just read like such a ridiculous man. I think the writers – Alice (Sidgwick) and Jack – initially had him down as a more caddish Rex Harrison-esq leading alpha male, which I liked but then, as it turns out, I took parts of that and added a bit of 007 Roger Moore and Jeremy Irons ’Scar’ (from The Lion King) into the mix. These were all unconscious decisions I might add…

In both Here Comes Hell and Killer Weekend (aka F.U.B.A.R.) you’re a bit of a scene stealer and you really get to show your natural talent for comedy. Where does your comedic timing come from and is comedy something you’re particularly interested in exploring further?

I don’t know where my comic timing comes from. I am the middle child of three boys and I think that might have helped – classic case of MCS (middle child syndrome) having to (or perhaps more aptly feeling like I have to) fight for attention from my parents (poor guys – you can imagine their torment – my mum especially with 3 boys!), and humour was my thing. My grandad was always pretty dry so maybe I inherited a bit of it from him? But ever since I can remember, I just enjoyed making people laugh and – as all actors – being the centre of attention. It’s again, all extremely cliched. Painfully unoriginal. BUT, I digress – in answer to your question, YES, I would love to do more comedy amongst a whole myriad of things.

Here Comes Hell is directed by Jack McHenry, who co-wrote the screenplay with Alice Sidgwick. What was he like to work with?

Jack is a brilliant director to work with. He’s very involved and extremely easy going so was great to bounce off of and both work together at developing ‘Freddie’ and his journey throughout this insane story.

What would say was the biggest challenge when making Here Comes Hell?

The whole experience was honestly, such a joy that it’s hard to pinpoint. Maybe at a push, I’d have to say it was perhaps filming in the heights of winter in Lincolnshire in a ruined abbey with no central heating or roof? It snowed. Even though the location was absolutely spot on in terms of its look and feel, it honestly felt like I couldn’t feel most of, if not all of my appendages, for the majority of filming. But aside from that, we had so much fun together after filming that maybe it was also the hangovers?

After Here Comes Hell, what other projects do you have coming up?

I’m currently rehearsing a for a production of Eugene O’Neills Mourning Comes Electra as well as writing my own script for a potential comedy series.

What’s the one horror movie you would have loved to star in and why?

That’s a tough one. I don’t have one answer. If we’re talking recent horror, then I’d have to say Heriditary – purely because I think it’s one of the best horror films I’ve ever seen. I also love the self-awareness of the 90s classic Scream franchise – as a 30-year-old actor it’s my dream to play an American teen college student. The Shining – I don’t think I need to explain this?

Why should people at Arrow Video FrightFest go and see Here Comes Hell?

Because it’s unlike anything you’ve seen before….well…that’s not entirely true…it’s like a few things you may have seen before, but then mashed up, bitten off and spat out into something truly brilliant.