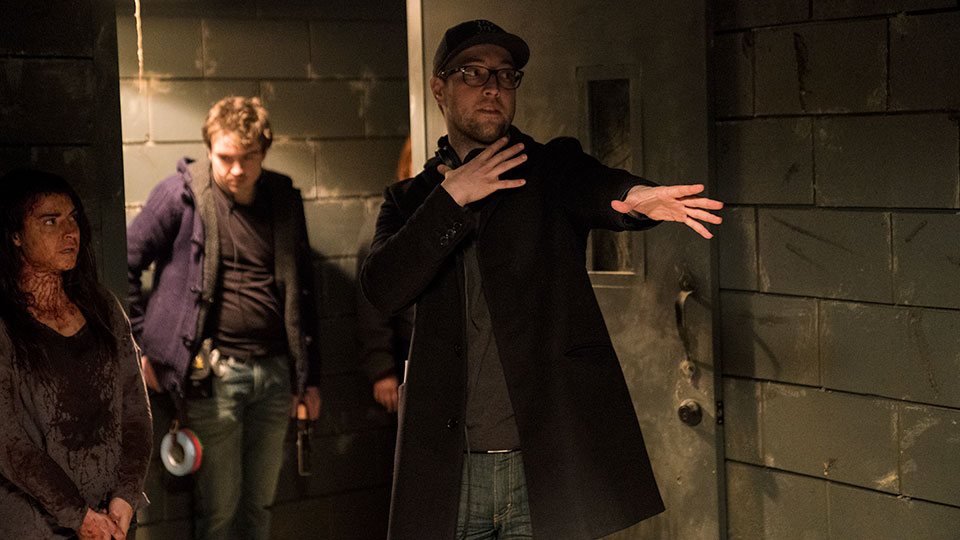 His third film, following 2012’s Hemorrhage and 2014’s Feed the Gods, True Fiction is a classic two-hander that packs in plenty of twists and turns. At times an unsettling and disorientating watch, the film is always engaging and will keep you on the edge of your seat.

I caught up with Braden ahead of Arrow Video FrightFest to find out more about the film, talk about the two lead actors, and discuss the challenges in bringing True Fiction to life…

Hi Braden. How are you today and where does this email Q&A find you?

Your film True Fiction is coming to Arrow Video FrightFest in August. What can fans expect?

Fans can expect a contained psychological thriller / horror film that pays homage to other two-hander genre classics like Misery and Hard Candy while carving out our own little place among that subgenre.

True Fiction was initially born from a practical need to impose restrictions and limitations on myself to maximize a more potent and fully realized film. In other words, I needed to concentrate my resources (minimal actors, minimal locations) to execute a more effective story. I’m a huge screenwriting geek and have always loved chamber pieces that relied on tight storytelling and character play to engage an audience. Another restriction that inspired the film was getting out of my comfort zone and creating a strong female lead. Up until this point I’ve naturally told stories from a male perspective, so this was new territory and subsequently opened up thematic elements of the script that really defines what True Fiction is about; the abuse of power and perception of reality.

Sara Garcia and John Cassini are magnificent together. How did they come to be involved with the project and what did you feel they brought to the characters?

Sara and John were amazing to work with and really shine in the picture. Sara came by way of our casting director where her audition tape blew me away. If she turned down the role I really would have been thrown for who to cast because I couldn’t see anyone else playing her once she read for the part. John was a recommendation from my producer (and actor) on True Fiction, Julian Black Antelope. I was familiar with John’s work due to my time as a casting room camera boy in Vancouver where he’s a prominent figure in the acting scene.

When we finally got in a room together it was clear to me these two were a perfect match. It was a stroke of luck they hit it off so well and trusted each other with the work. Sara brought amazing amounts of focus and commitment to the role that you dream of as a director – her dedication to her craft brought depth, subtlety and empathy to Avery that really holds the picture together. John, on the other hand, is a veteran actor who really finessed a lived-in performance with Caleb that no direction could have forced. He was rock-solid, enigmatic, charming and terrifying. I love ’em both!

There are so many twists and turns in the film that you really feel the disorientation that the characters do. How did you manage to balance all of those while keeping the viewer engaged and invested?

As I mentioned previously, I’m a screenwriting geek and a perpetual student when it comes to trying to improve on the craft. One notable difference on True Fiction (opposed to my previous films) was that I really took the time to map out and develop the script from its logline down to the smallest ‘beats’. External, internal and interpersonal conflicts had to be engaging and always escalating to keep me (as a writer) interested, so I trusted that the process would keep a viewer interested as well. I certainly don’t have all the answers as to what makes an audience ‘care’ or ‘engage’, but I believe strong storytelling is everything when it comes to making an effective picture.

What challenges did you have in terms of bringing this film to life?

The biggest challenge for me is always sitting in my chair to write. If I can turn off my phone and sit down to do the work then the hardest part is over. Second to that is always finding the money. Luckily, I had faith from Michael Peterson and the 775 Media team after I pitched the script to him. It was a fortunate case of lucky timing. Keep in mind the moment I first sat down to write to the moment we had funding was at least 5 years.

Another unique challenge we had was finding a Victorian Mansion in Alberta. We soon found out such a thing does not exist, haha. Luckily, we found a very Canadian-esque luxury cabin – once owned by Canadian singer-songwriter, Jann Arden – that worked great!

Have you started to think about your next project yet?

Oh, most definitely. I keep a spreadsheet of ideas that haunt me everyday for not writing them. I’ve got a cyber-punk action/thriller, single-location siege/horror and period-piece psychological horror in the oven. Since they’re all in various stages of development, it’s the primary source of my creative anxiety and the reason I can’t relax as my friends and family suggest.

What film-makers have inspired you over your career so far?

My answer to this used to be so simple: Stanley Kubrick, Alfred Hitchcock and at least one of the New Hollywood Brats (Spielberg, Scorsese, Coppola). Like anyone, I go through stages of intense interest in a particular director(s). Newer directors like Jeremy Saulnier, Lynne Ramsay, Mike Flanagan, Jeff Nichols, Alex Garland and Gareth Evans are incredible. Modern masters like the Coen Bros, Guillermo del Toro, Edgar Wright, Denis Villeneuve… the list can go on and on… they’re all amazing.

It may be simpler to ask ‘who is your favourite this month?’ To which I’d reply, Baran bo Odar. His work on his series, Dark, is mind-blowing. I absolutely love his eye, tone, character work and storytelling abilities.

What’s your favourite horror movie of all-time and why?

Silence of the Lambs. I would struggle to name a better horror film that surpassed it on any facet of filmmaking. No other film proved to me that horror can be that intellectually sophisticated, emotionally robust, viscerally terrifying and wholly entertaining as Jonathan Demme’s masterpiece. I can rattle off a list of why I think it’s possible one of the best films ever made, let alone my favourite horror film. I’m in awe every time I watch it!

Why should people check out True Fiction at Arrow Video FrightFest?

People should check out True Fiction if they’re looking for a change from more conventional pictures of the genre. Let’s call it a palette cleanser between zombies, vampires and run-and-hide slashers!

If you’re a discerning genre fan that appreciates hard-boiled horror / thrillers that entertain and twists your brain in a knot then I think True Fiction may just be a movie worth checking out at this year’s FrightFest.

True Fiction will receive its European Premiere at Arrow Video FrightFest on Saturday 24th August 2019 at 1pm in the Cineworld Discovery screen. For more information and tickets, please visit http://www.frightfest.co.uk. Watch the trailer for True Fiction below: