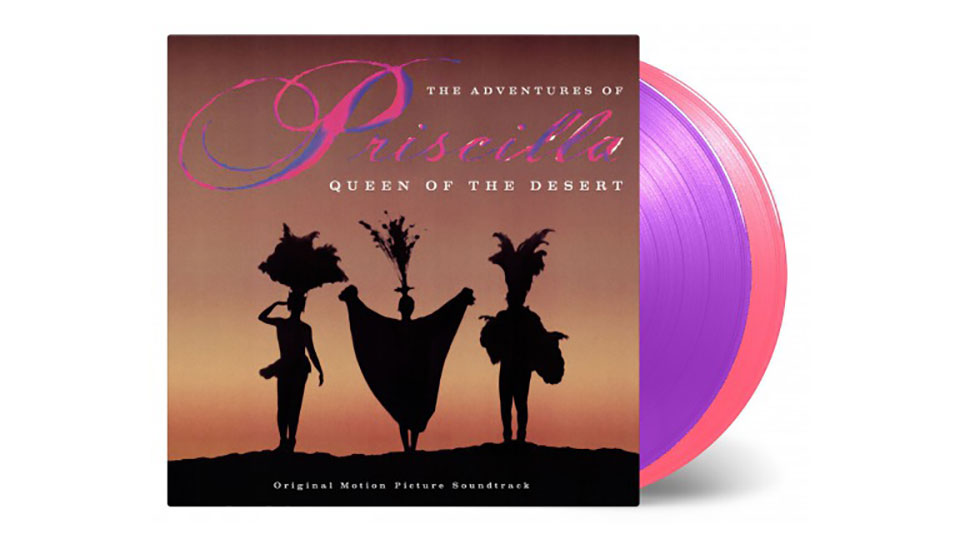 The Adventures of Priscilla: Queen of the Desert was originally released in 1994 and has gone on to be one of the most iconic films ever to come out of Australia. Written and directed by Stephen Elliot, the comedy drama tells the story of two drag queens and a transgender woman who travel across the Australian outback on a bus named Priscilla. The film starred Guy Pearce, Hugo Weaving and Terence Stamp and has since been turned into a hugely successful theatre show.

To mark its 25th anniversary, Music on Vinyl has released a limited edition 2LP version of the film’s iconic soundtrack. It’s the first time it’s ever been available on the format and is limited to 2,500 individually numbered copies. The limited-edition release is pressed onto 180-gram vinyl – one pink and one lavender – and it comes packaged with two postcards and a poster of the cover. There is also a black-and-white insert detailing the credits for each song. The only slight disappointment is that the release didn’t get the glossy gatefold treatment that other Music on Vinyl film soundtrack releases have enjoyed. It’s a small quibble but would have been a nice extra touch.

The first LP features 14 songs across two sides starting with the Charlene ballad I’ve Never Been to Me. There are so many highlights across the disc that it’s hard not to mention every single song. Alicia Bridges’ I Love the Nightlife (Disco ‘Round) won’t fail to get you grooving but for me it’s all about the 7″ Choice Mix of Ce Ce Peniston’s dance classic Finally. That song has become synonymous with The Adventures of Priscilla: Queen of the Desert and it sounds as fresh today as it did back in the 90s.

Elsewhere the soundtrack features the ABBA favourite Mamma Mia, The Village People’s disco classic Go West, the original version of Gloria Gaynor’s I Will Survive, and Peaches & Herbs’ Shake Your Groove Thing. The disc comes to a close with Vanessa William’s signature ballad Save the Best For Last, which will transport any child of the 90s right back to the moment it was dominating the charts.

The second LP, on 45 rpm, features 5 remixes of tracks from the soundtrack. There are two fantastic remixes of Alicia Bridges’ I Love the Nightlife (Disco ‘Round) and 12″ mixes of The Village People’s Go West and Peaches & Herbs’ Shake Your Groove Thing. Gloria Gaynor fans will love the 1993 Phil Kelsey Classic 12″ Mix of her legendary track I Will Survive too! The bonus LP is a nice addition to the package and gives it something extra special.

The Adventures of Priscilla: Queen of the Desert is a classic soundtrack and it sounds glorious on vinyl. This 25th anniversary limited edition is an absolute must-have for fans of the film and it’s the perfect soundtrack for any party. There are so many iconic songs on here that you’ll find yourself listening to it over and over again. It’ll also make you want to revisit the brilliant film!

In this article:Music on Vinyl, The Adventures of Priscilla: Queen of the Desert