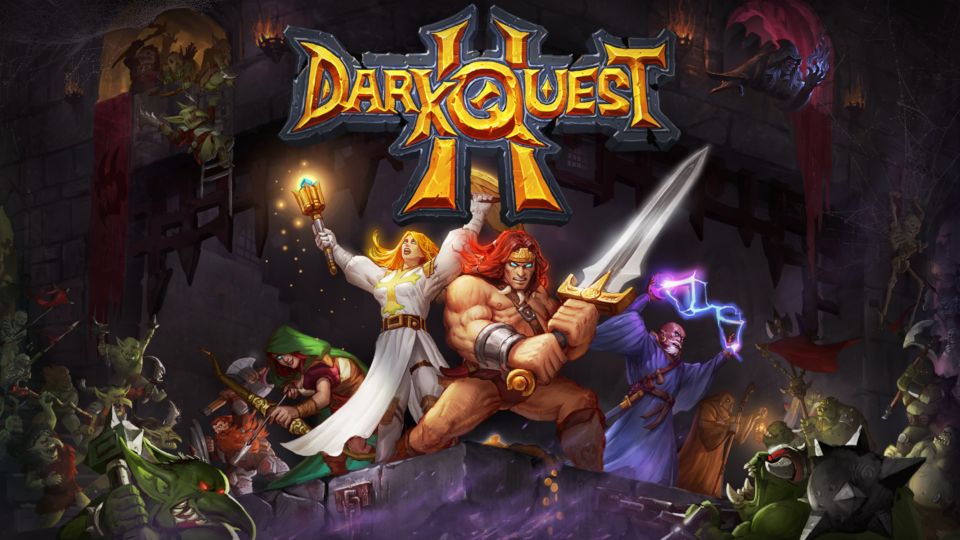 Dark Quest 2 is based on fantasy board games I used to play as a kid, primarily Hero Quest but others too. I’m one of the guys that even went as far as painting the miniature figures that came with the game. Given my fond memories, I wanted so badly for Dark Quest 2 to be brilliant. After playing for a few hours I would have settled for it just being good. After playing for a few more I just wanted it to be over. It’s not completely without merit but the flaws far outweigh the good stuff.

The story of Dark Quest 2 pits you and your party against an evil sorcerer who has taken over a castle. Your task is to take it back and kill the said sorcerer. You start off with just one character to control as the game eases you into how to play. Soon after your party will grow and there are several characters to choose from all with pretty standard types. There’s a caster, a healer, a tank and several DPS classes to choose from. This offers a decent amount of variety especially as each character has their own skillset.

It’s a turn-based dungeon crawler set in a fantasy world. The dungeons are pretty basic if I’m honest and offer little in terms of variety. They all look very similar and it’s hard to tell one from the other. The first few, as you would expect, are very easy but after that, the difficulty just randomly jumps to near impossible. This is made even more apparent given the completely random way the combat works.

The game boasts that dice are rolled behind the scenes and this is most definitely the case. Whether you hit or not seems like pure chance and even then you might not do any damage. There are modifiers you can unlock as you progress but I didn’t see any noticeable improvement. This random nature became so apparent when you were fighting a group that consisted of a few weak enemies and one tough one. The tougher enemy would sometimes go down like a sack of spuds in seconds with the supposedly weaker enemies taking several turns with all three of my heroes attacking before I could knock its single health point off.

In between dungeons, your party heads back to the local village to rest and rearm. In the village, you can resurrect dead heroes, recruit new ones, upgrade abilities and items and you can visit a brothel to get a random buff for the next dungeon. The village is quite nicely drawn and rather humorous, it’s a nice break from the dungeons. The menus within each building, however, leave a little to be desired. Intuitive it is not and it took several hours before I stumbled on how to spend the magic flasks I’d been collecting. These flasks are used to upgrade your abilities and are seemingly vital. It turned out it didn’t matter that I’d figured this out though as the combat continued to be as random as ever.

The art style of the game is one thing I did like about the game. It’s intentionally dated and fits really well with the theme of being a tribute to a retro board game. I found the way the characters seem to have a certain bounce to their step as they march around slaughtering baddies to have a certain charm.

View some gameplay footage below:

Another feather in the cap of Dark Quest 2 is the price, it’s currently priced at £2.89 (normally £5.79) on Steam which does make it tremendous value.

To sum up, Dark Quest 2 could have been a great game. Its influences are clear and certain to hook a certain type of gamer. I loved its simple graphical style and the variety on offer in terms of party composition and loadouts. Sadly the combat made it disappointing to play and completely detracted from any decisions I made. If you’re after a bargain turn-based dungeon crawler then this could be the game for you but if you want something with a bit more depth and feel that your actions actually have an impact on the outcome I’d look elsewhere.

Dark Quest 2 was reviewed using a digital code supplied by the publisher.