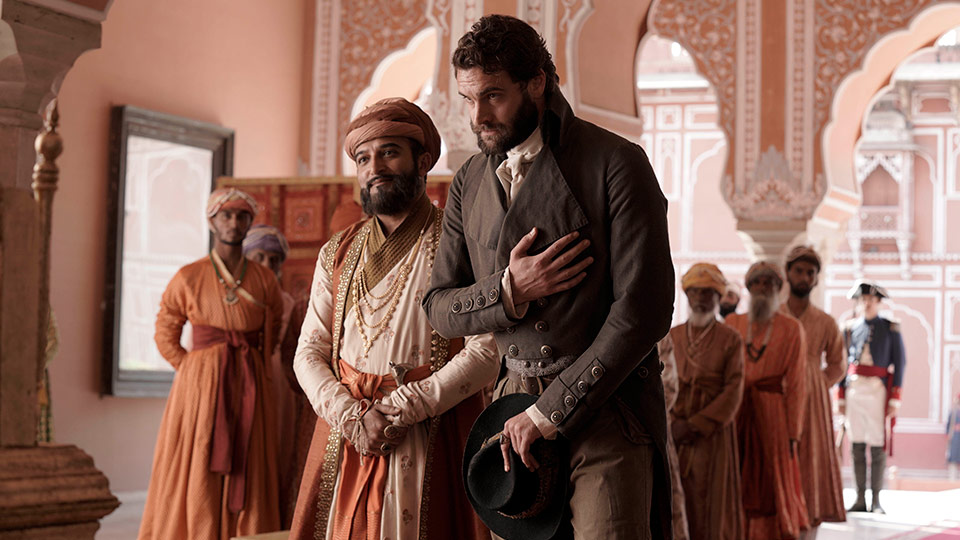 If you don’t want any spoilers for Beecham House, stop reading this article now.

The episode opened with John Beecham (Tom Bateman) stopping the murder of an Indian man whose carriage was stopped by tyrants. Beecham shot the men before they could kill the people on the carriage. Then the action jumped three years forward to 1795 in Delhi. Beecham is seen riding on the front of a carriage to the mansion that he’s bought and as they wait for his arrival Baadal (Viveik Kalra) and Mool Chand (Kulvinder Ghir) prepared busily prepared for their new master’s arrival.

For his arrival, the household staff were outside the mansion to greet Beecham and were taken aback when they discovered he’d brought a baby with him. When questioned about it, Beecham told Baadal he’s a private man and refused to answer their questions.

After looking around the house, Beecham told Baadal to prepare a room for his mother Henrietta (Lesley Nicol) who was due to arrive after him. That night Beecham dreamed of making love to a mystery woman and when he awoke he touched the side of the bed that she used to sleep on.

That morning Baadal showed Beecham the garden of the house, a vast expanse of land with water features, trees and plenty more delights. He found a space that he requested be made into a chapel for his mother before explaining that he hadn’t seen his mother for 12 years and that she’d invited herself to the house.

One of the household staff brought Beecham an invitation from General Castillon (Grégory Fitoussi), who Baadal warned him was not a good man. Taking that advice on board, Beecham paid a visit to the General and witnessed men wrestling as he arrived. Coming face-to-face with General Castillon, Beecham was quizzed about whether or not he was still part of the East India Company. He denied it but Castillon accused the company of stealing.

Beecham insisted he was not like his countrymen but Castillon wasn’t buying it. He went on to say he stopped being a soldier so he could trade properly rather than pillage. Castillon offered to introduce him to Emperor Shah Alam (Roshan Seth), who would be able to negotiate and approve any trade deals.

When he left Castillon shared his suspicion that Beecham was still working for the company, accusing him of being treacherous. That evening Beecham was alerted to two intruders in the grounds of the house but he didn’t manage to catch them before they made their way over the back wall.

The next morning Beecham checked in on his baby, August, who was being looked after by Chanchal (Shriya Pilgaonkar). Chanchal paid a visit to the cooks and ordered them to make a variety of foods. When they tried to question them about Beecham’s wife and the mother of his baby, she refused to reveal anything.

Beecham set about work hacking down some trees in the garden, drawing the attention of Baadal. They were interrupted by Murad Beg (Adil Ray), who lives next door to the house, and he offered to help watch over the house after hearing of the intruders. Murad extended an invitation to Beecham so he could get to know him better.

As night came, Beecham attended Murad’s party and was introduced to his daughter and her teacher Margaret Osborne (Dakota Blue Richards), who caught Beecham’s eye. Castillon turned up at the party and spoke openly of Beecham’s desire to make a trade deal. Murad expressed surprise and offered to introduce Beecham to the Emperor rather than Castillon doing so.

It also looks like a love triangle may be on the cards as both Castillon and Beecham looked over at Margaret fondly, which didn’t go unnoticed.

The next day, Murad took Beecham to meet the Emperor who refused to make any deal with the East India Company. Beecham reiterated that he was no longer associated with the company and he impressed the Emperor by reciting some poetry he liked. He pleaded with the Emperor saying he wanted to trade honestly and asked him for a licence.

Like a bad smell, Castillon turned up again and tried to sway the Emperor, asking him not to grant a trade licence. Beecham became desperate and offered to serve him, which amused the Emperor who asked him to find the perfect gift for the Empress’ birthday suggesting that if he succeeds, he may get a licence. Castillon aired his concerns to the Emperor who told him he was playing the situation like a game of chess so they could keep an eye on Beecham and prove he was still working for the company.

Back at the house, Margaret stopped by to see Beecham. They made small talk and then Beecham seated Margaret at a table where the household staff had been working overtime to make English puddings. Baadal and Mool watched on, picking up more clues to Beecham’s relationship status surmising that he can’t be married as he was flirting with Margaret.

Once they finished the food, Beecham took Margaret for a walk around the gardens as Chanchal watched on concerned. Margaret tried to find out more about Beecham and she revealed that her brother had abandoned her shortly before she started working for Murad. They stopped in the chapel and Beecham asked Margaret if she could help his mother settle once she arrives at the house. Margaret accepted.

Baadal accompanied Beecham to town to meet Henrietta. They found her and she had brought Violet Woodhouse (Bessie Carter) with her unexpectedly. As they were about to leave Beecham was surprised by Samuel Parker (Marc Warren), an old acquaintance that had also travelled to India with Henrietta.

Henrietta marvelled as they reached the house and suggested that Beecham build a similar house back in England. Margaret was at the house waiting and Henrietta was a bit rude to her when she introduced herself, as was Violet.

Margaret excused herself from the table and Henrietta told Violet not to worry about competing with Margaret for Beecham’s affections. She’d purposely brought the woman to India to match-make her with her son.

Samuel asked Beecham if he needed a worker and Beecham invited him to become his partner.

As Henrietta and Violet looked around the house, they heard a baby crying and it turns out no one is aware that Beecham has a son. Going to get August, Beecham brought the baby to meet his mother and his gathered company. Henrietta asked who the mother was and if the baby was Beecham’s, expressing surprise that the baby was of mixed heritage. Beecham confirmed it was his son and it sent Henrietta into a spin.

Over dinner Henrietta expressed her disappointment with her son and shared her frustration with the heat in India. Beecham asked what he could do to help his mother settle in and she asked about her other son Daniel (Leo Suter), whom Beecham hadn’t managed to find. He offered to write to his brother to try and make contact with him again.

Samuel shared in private that he believed John was on an expedition for the company in a place near Delhi. He pointed out that his brother being close by could cause Beecham problems with the Emperor. Samuel and Beecham set off in search of Daniel who was seen in a brothel.