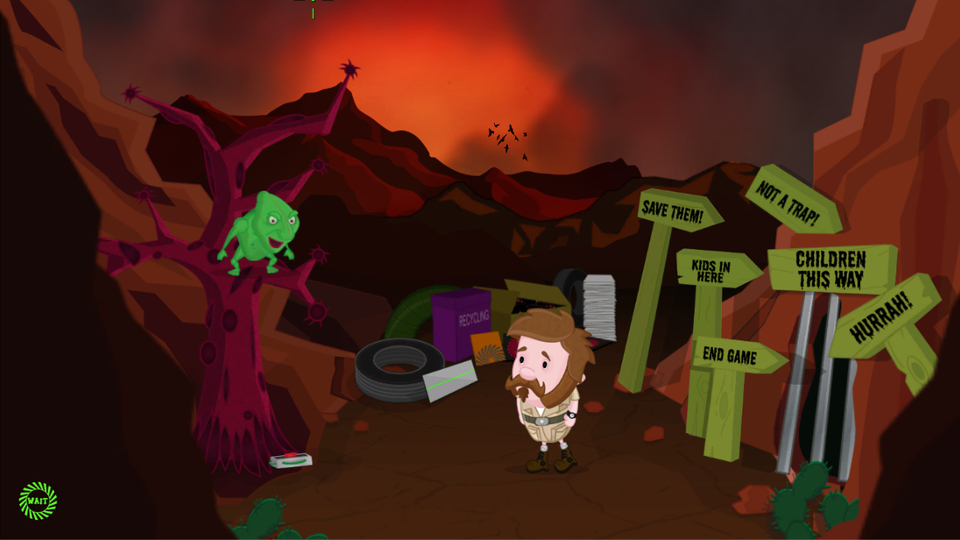 Funded successfully on Kickstarter, Lightfoot Brothers give us a delightfully whimsical point-and-click, The Mystery of Woolley Mountain. If you’re any bit of a cracking detective, (I know you Columbo types are out there!) you might have guessed what the adventure entails–that’s right! You’ve got to hotfoot it up to Woolley Mountain to follow a lead on a note left behind from your mate, Vandamme Laudenkleer, warning of a witch residing atop the mountain, keeping innocent prisoners bound. Gasp! As with any point-and-click though, running circles around yourself with the steps to meet this goal is all in the fun! Right-ho! Allons-y!

The Mystery of Woolley Mountain sets the stage with a colourful cast of characters. You play as a stately chap, moustached and top hatted to the brim…not to be caught short of a lofty Victorian sounding English accent. Level headed and a natural alpha of the group, you slowly gain your crew members before setting out. Each one has their own quirks, which can be easily mistaken for the whole of their personalities.

Watch The Mystery of Woolley Mountain launch trailer below:

A dazzling feature of The Mystery of Woolley Mountain has to be the wonderfully endearing graphics and animations. Reminiscent of early Internet Flash games, the charm was lovely and immersive, using old tricks to spice up new ideas. Crystal clear resolution, might I add! None of that waiting to buffer for ages just to hear Strong Bad yell at The Cheat either! With crisp corners and a remarkably advanced echo of MS Paint, doing your real work–i.e. pointing and clicking–tends to be quite easy and fluid as you move about. Loading new screens isn’t an all day affair, thank goodness!

Speaking of the screens, each is packed full with things to click and explore. Loads of things to do on the side, and occasionally you’ll run into a well-placed mini game, just to liven things up. The childlike curiosity that I always had playing interactive storybooks as a kid came back in full force as I just wanted to touch every bit of every room and environment. Sure, we’re meant to be on a mission here, but the real gem of the game is to stop and smell the roses.

View some screenshots from The Mystery of Woolley Mountain in our gallery:

When I say that slowing down really heightened the enjoyment of playing The Mystery of Woolley Mountain, there’s no way I could leave out the absolute shining star of the entire game: the voice acting. Absolutely packed full and spilling out of the seams is a line for EVERYTHING. The sheer amount of voice acting work that went into telling this zany tale is astounding. Not only is it functional and humorous, it’s so very well done. Each character sounding completely on their own in terms of personality, with deliveries being so spot on that it’s hard not to love just listening to everyone speak. Whether the line is to serve a purpose or not–it’s there, and that’s where you can see where the love went in and what makes it such a cut above.

I can’t give too much away in terms of the story! But I can tell you that The Mystery of Woolley Mountain is delightful, will get you laughing, challenging with its puzzles, and chock-full of quality. If you’re looking for a point-and-click to really take your time and enjoy, no doubt The Mystery of Woolley Mountain is going to be an adventure for you!

The Mystery of Woolley Mountain was reviewed using a digital code supplied by the developer.