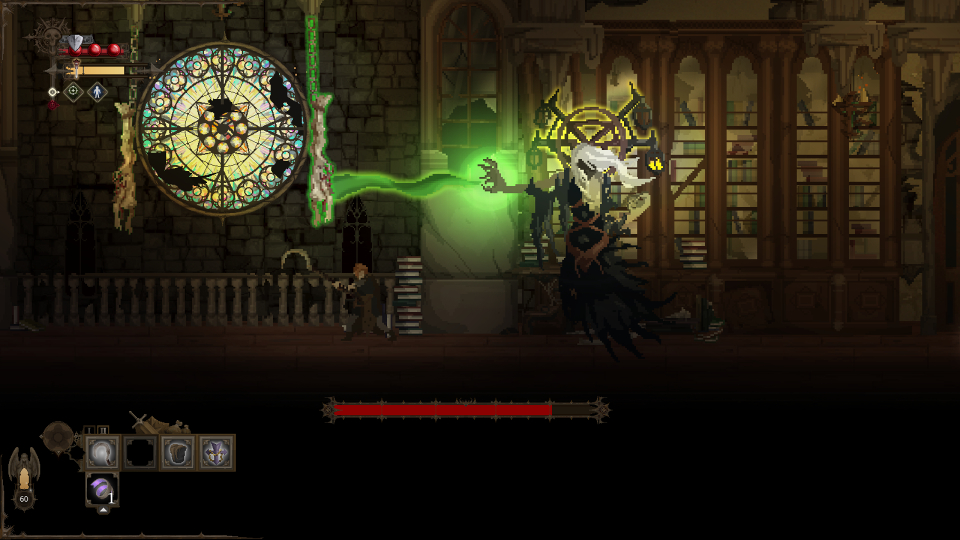 Hail Templar! Your pilgrimage has now begun to find out the details of your very existence. Shrouded in mystery, Hibernian Workshop drops you into the role of the nameless Templar, a female warrior with faith as her strongest weapon to guide her.

Diving in to a critical part of gameplay, combat in Dark Devotion isn’t a matter of jumping into Hell feet first–if you’re anything like me, you had to almost recalibrate the way you come blazing into battle, relying on the hacking and slashing to clear anything in your way. However, the pacing of the combat is much slower and certainly deliberate; you’re made to be tactically juggling a stamina bar, and the strokes of your weapons–be it a big, slower moving one, or a quicker, pluckier one handed item. Gone are the days of simply rushing your enemies. You’ll have to go almost turn for turn on strikes, greed getting you only but an early grave. Patience and learning techniques and rhythms plays to the utmost importance when going toe to toe with these baddies–so to those that seek instant gratification in video games: beware.

The character design in Dark Devotion is magnificent, from your allies in the safe hub, the throw away corpses littering your path, to the common enemies and boss designs. The pixel art dances a line of being incredibly detailed, and leaving just a little bit to the imagination. Carrying over into the environments, Hibernian Workshop has managed to really ooze out the eerie in a diabolical and extremely effective way. Bosses are often surrounded by gruesome scenes, taking place as a macabre centrepiece themselves. The concepts that paint the walls of each screen really are haunting, the cherry on top being an atmospheric soundtrack that really sets the already intense mood.

There are some clever bits of gameplay that force you to put a bit of thought in. One being, the checkpoints. You can have only one active at a time, which will make it so you’re very strategic about which one you choose. The dungeons are quite expansive and with the bosses being accessible at any level, so it’s smart to set yourself up in various different ways to work to become stronger and visit later with proper equipment and experience.

View some Dark Devotion screenshots in our gallery:

Exploring the dungeons themselves feels very reminiscent of Prince of Persia. Plenty of traps and spike pits to line the way, and with no jumping option, you’ll be using the momentum of your roll to clear dangerous chasms, often learning by deathly trial and error of their existence. Upon dying (which is something you will get used to), you’ll be put back into the safe hub area, but with your map revealed to what you previously discovered, and whilst there’s no randomization that takes place with the map itself, everything respectively respawns (yippee!), back again to give you a hard time.

Dark Devotion doesn’t mince words with it’s difficulty, knowing full well what it’s all about. The controls are going to take some getting used to if you’re a person like me who likes to mash buttons to kill–impatience will be the biggest punishment over what any enemy could possibly do to your fearsome Templar. If you stick it out though, Dark Devotion has a lot to offer, including deliciously satisfying victories. Now, time to step forth and chase your calling, for you are the Templar!

Dark Devotion was reviewed using a digital code supplied by the publisher.