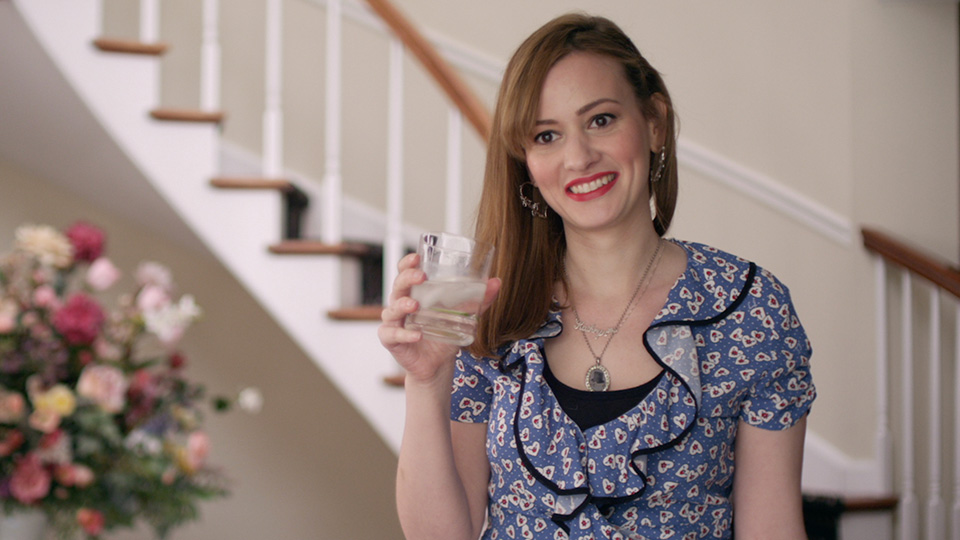 Fashionista Kathryn (Allie Loukas) hits the booze hard during her mother Elizabeth’s (Angela Beckefeld) annual garden party. During the party she discovers that someone has blocked the toilet so she calls a plumber called Bob (Christopher M. Walsh). Once Bob arrives, Kathryn holes herself up in the bathroom with him while he tries to fix, and makes worse the problem. Hearing all the commotion, Elizabeth rushes to the bathroom and is shocked to see Bob, someone she had a one-night-stand. Even more shocking is that Bob is actually Kathryn’s biological father.

Kathryn Upside Down is the debut feature for Allie Loukas. She not only stars in it but she wrote and directed it too. That’s a pretty impressive feat for anyone, never mind someone who is just at the start of their career. Inspired by the ‘fish-out-of-water’ style comedies that dominated the 90s, Kathryn Upside Down has a simple but effective premise to draw you in. The film gets off to a strong start and I bet more of us can relate to Kathryn’s drunken party antics than we’d like to admit.

Loukas plays Kathryn as unapologetically uncensored, something that works well to begin with but gets a little grating over the film’s 93-minute run time. I was really hoping for a little more nuance to the character but it doesn’t really come. That’s not to say that Loukas’ performance is bad, it isn’t at all, it’s just that I expected Kathryn to have some kind of evolution over the course of the film, especially given that she has to try and find a way to form a relationship with a man she didn’t know existed.

The main focus of the film is Kathryn dealing with the realisation that Bob is her father. It’s a bombshell that would throw all of us for a loop so her initial reaction is understandable. Bob is played well by Christopher M. Walsh, who makes the character into a bit of a loveable oaf. He forms a decent chemistry with Loukas’ Kathryn and the scenes they share together are among the best in the film.

As a debut feature film Kathryn Upside Down shows promise. It’s a little rough around the edges and the characters, particularly Kathryn, could have done with being a little more rounded and realised. Having said that the film did make me laugh-out-loud on multiple occasions and it definitely left me feeling a little warm and fuzzy. Loukas is clearly talented and perhaps with her next film, it will be a bit sharper and developed.