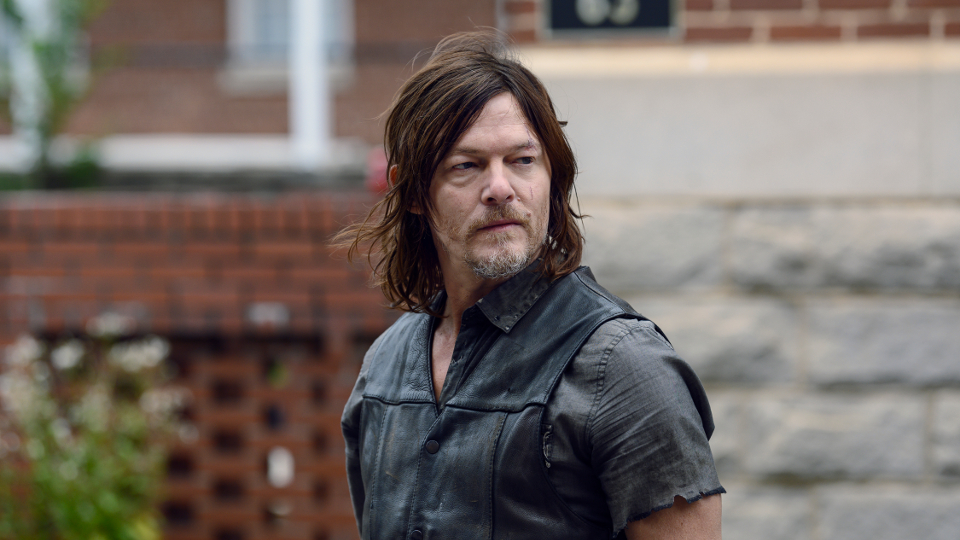 On the latest episode of The Walking Dead, the communities came together to participate in The Kingdom’s fair.

At the end of last episode, some Whisperers found their way to The Kingdom and decided that Alpha (Samantha Morton) needed to know.

The Calm Before opened up with two new characters called Miles (Brian Sheppard) and Hilde (Caroline Duncan). A quick series of flashbacks showed how they’d shared anniversaries together and also when they came across Hilltop for the first time. Hilde made a wooden coin with the letter H on it and Miles suggested she should make more for the community.

Back in the present the pair were getting a carriage ready to head off to the fair. The next scene was a scene of devastation as the Whisperers had attacked the carriage. Alpha was shown to be scalping the lifeless body of Hilde.

At the Kingdom, Ezekiel (Khary Payton) gave a speech to the crowds gathering for the fair. People had travelled from Hilltop, Alexandria and Oceanside for the event. With the fair declared open, everyone got to enjoying themselves. Well almost everyone, as the leaders had important matters to discuss.

A group got ready to go out in search of Daryl (Norman Reedus), Connie (Lauren Ridloff), Henry (Matt Lintz) and Dog who hadn’t returned since Henry went missing. As they were about to leave the gates opened and in the group rode along with Michonne (Danai Gurira) and Judith (Cailey Fleming). They also had Lydia (Cassady McClincy) with them which made people wary.

Michonne called a meeting between the leaders of each community. After some arguing they agreed to grant asylum to Lydia and to defend each other in case of attach with a mutual protection pact. Ezekiel pulled out the charter that Michonne made and each community signed it.

Meanwhile, the fair was in full swing. Kids were running around having fun, Earl (John Finn) was showcasing his blacksmithing skills. Enid (Katelyn Nacon) was giving CPR lessons and Eugene (Josh McDermitt) had built a dunk tank.

With fears of a Whisperer attack growing, due to Lydia escaping with Daryl, the leaders decided they should send some of the more experienced fighters to defend Hilltop. The group included Daryl, Carol (Melissa McBride), Michonne and Yumiko (Eleanor Matsuura). On the way they came across the Highwaymen who showed them what had happened to Miles and Hilde.

Daryl led the search and used his tracking skills to follow the trail. Something didn’t seem right when the tracks went off in three different directions. As the group wondered what to do, walkers began to approach them from all angles. With nowhere to run they had no choice but to stand and fight and they had bodies piling up all around them. The final wave proved to be Whisperers and the group found themselves greatly outnumbered and were forced to surrender.

Meanwhile, at the fair it was revealed that Alpha was there dressed in Hilde’s clothes and wearing her hair and hat as a disguise. With so many people who didn’t know each other, Alpha had no trouble blending in. She was eventually approached by Ezekiel and introduced herself as Debbie. He showed her around.

Lydia heard a noise, but Henry explained it was just some pipes. He left her alone to go and investigate and asked her to save him a seat at the movie. Lydia did so but Henry didn’t turn up, instead her mother came and sat with her. Outside she tried to get Lydia to go back with her but she refused. Instead she demanded her mother leave or she’d scream. Alpha decided that she would let Lydia stay.

Back with Daryl and the others, Alpha arrived and it became clear that this was happening after the events of the fair. Beta (Ryan Hurst) explained they were forced to take action as Daryl hadn’t let him take Lydia back. Instead of killing the group, Alpha led Daryl away at gunpoint. She took him to a cliff and down below was an enormous horde of thousands and thousands of walkers. This was Alpha’s secret weapon which she said her followers could direct to wherever she chose.

Alpha then told Daryl that he could return to his friends. Before he left she explained that she had erected a new border and that the communities needed to stay out of land owned by the Whisperers. She told Daryl that they would know when they found the border.

A bit confused, Daryl left and reunited with his group. A little way they came across Siddiq (Avi Nash) beaten and tied to a tree. He seemed traumatised and the group soon discovered why. The new border consisted of ten pikes and each was topped with the head of someone we recognise.

Later, back at the Kingdom, Siddiq gave a speech about what he had seen. He was taken with the others and they fought for their lives. The Highwaymen had turned up and tried to save them but everyone was killed. Siddiq was left alive to tell the tale. However he wanted everyone to remember, not the tragedy, but how their friends had died as heroes.

At the end of the episode, Daryl took Lydia to the pikes on the hill. The heads had been removed and she placed a necklace made from one of Hilde’s coins in the grass as it began to snow.

Can’t wait for the season finale? Check out our preview of The Walking Dead – 9×16 The Storm.