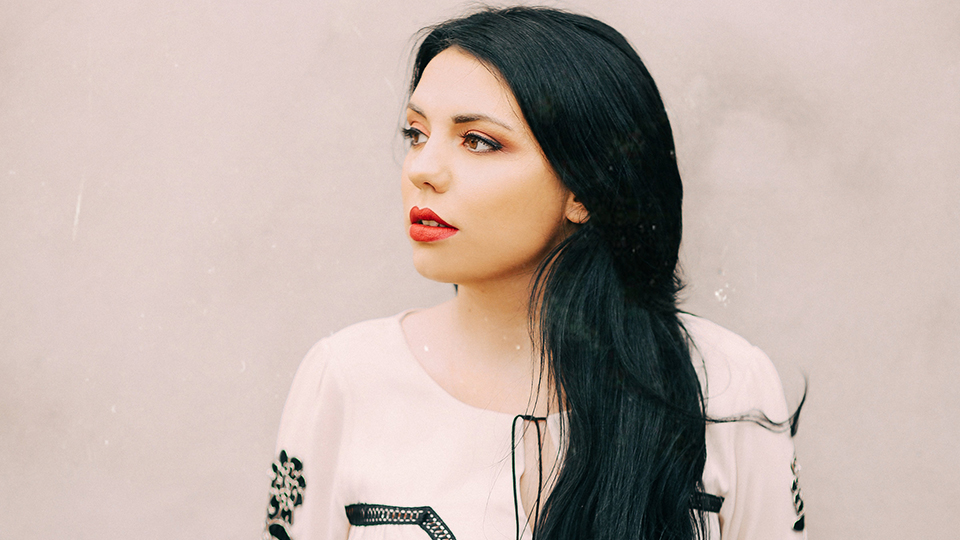 Though she released her debut EP back in 2016, West Yorkshire’s Jade Helliwell rose to fame when a video of her performing alongside a busker on a night out on Leeds was viewed over 24 million times.

Since the clip went viral, Jade left her job in a school to pursue her music career full-time – and it’s paying off. She’s performed at festivals including Nashville Meets London and Buckle and Boots, had a number one EP on the UK iTunes country chart, and won the 2017 British Country Music Association Female Vocalist of the Year Award. Her latest EP, Infatuation, was released last year.

Ahead of her performances at C2C Festival last week, I spoke to Jade about her new single Stormchaser, her approach to songwriting and her recent trip to Australia with Buckle & Boots. Read on to find out more…

Hi Jade! What can people expect from your live shows?

Well at C2C rather than play the same thing both days I decided the first show would be acoustic, so people can really hear the songs stripped back, and then the second show I’ve got the full band with me so there’ll be a little bit more of a party vibe. So I like to mix things up.

Are there any songs you particularly enjoy playing live?

Yeah, I just released my new single Stormchaser. C2C is the first time I’ll have played that with a band, so I’m really looking forward to that one.

What is it that you think makes C2C such a special festival?

I just love how it brings people together – not even just other country artists, it’s worldwide. I see such a mix of people flying in from all over to come together and listen to a genre of music that’s still not massive in the UK, but for this weekend it seems like everyone turns into a country fan and I just love that.

You’ve mentioned your new single Stormchaser – can you tell us a bit more about that?

So at the back end of last year I went to Nashville and did a little bit of writing over there. I wrote Stormchaser with Luke Thomas and Jason Tucker, and it was an idea that he’d brought over from a co-write with Daisy Davis. So collectively we finished that song off. It’s about when you know something’s wrong or not good for you, but you keep running towards the eye of the storm. I’m really excited to see what people’s reaction is as it’s a little bit different to everything else I’ve released so far.

Is that idea of experimenting and evolving your sound something that’s important to you?

Yeah, definitely. I think with each release I try to evolve a little bit more from the last release, whether that’s in terms of my songwriting style or the production. I’ve produced my last EP and three singles with Rob Bolton, and he’s got a really good ear for the modern country sound which is exactly what I’m aiming towards. So that was really good to get in the studio with him.

You’ve played several festivals here in the UK and abroad. Do you prefer the festival shows to smaller venues?

It’s a different vibe, really. The festivals are really good because there’ll be a lot of people there that may never have heard of you, so it’s a really good way to meet new people and make new fans and get your music in front of new audiences. But a headline show is obviously great because people come because they already know your music and they like your music, so it’s a really fun experience as well for those people to see you live like what they hear on the record. So I do love them both but for very different reasons.

You recently went to Australia to play some shows with Buckle & Boots Festival – how was that?

Did you find there were any major differences?

It was similar in some parts and completely different in others. The country music scene in Tamworth especially is very similar to Nashville – they’ve got a Country Music Hall of Fame and they’ve got museums and things dedicated to the history of country music, which we don’t obviously have at the minute over here. But fingers crossed one day we will! [laughs]

Would you say you’ve got a typical approach to your songwriting?

Not really. It used to be that I’d just start with a song idea, but I’d say in the past two years my process has changed a little bit. Now if I get an idea for a hook I’ll write the chorus before any of the verses, and once I’ve got the chorus written then I’ll think about what I want to say in the beginning and where’s the story going in the end. So I look at it as a story and how to tell that story.

Do you ever get writer’s block? How do you deal with that?

Just stop! [laughs] Normally if I get writer’s block I just take it as a sign that whatever I’m trying to force out is not going to be natural and it’s not going to be my best work, so I just stop writing for that day. And then normally the idea just comes to you at a random point and then you can get back to it and finish it off. But it does happen. I’ve let it happen once in a co-write where we’ve just been like, ‘let’s call it a day’, but especially in a co-write normally when you’ve got writer’s block somebody will put a different spin on something and then it all gets going again.

You recently released the video for your song Drive – what can you tell us about that?

Drive was the first music video that I’ve ever done, so that was really exciting both to record it and release it and see what people thought of it as well. So I shot that around Manchester – during the day we did a studio shoot and then that night we were around Saddleworth and the moor area. It was really good fun to get to act in the video. We had a bit of a storyboard to it and got an actor in for the video. It was a completely different experience for me but a really fun one, so I’m definitely looking to do more videos in the future.

So I got into music when I was nine or 10 years old on holiday and I sang on the karaoke, and from there I just wanted to perform and be on stage. When I came back I recorded a covers album and I was performing at the local rugby clubs on the pitch before the games, so it sort of evolved from there. I started playing clubs around Yorkshire when I was 14 or 15, and once I’d got to 19 I’d taught myself how to play the guitar and started writing my own songs, and that’s when I got more into the country scene. I was doing it as a hobby but it was something that I always wanted to pursue, but I was working as well at the same time.

And then in 2017 I had a video with a busker go viral, and I was getting so busy on the back of that and having to go for interviews and things. At the time I worked at a school and you can’t take time off in term time. I had a really good headteacher who let me have some time off in term time, but I was asking all the time and I realised I had to make a decision – I either stuck at school and music was a hobby or I had to just really go for it. So I decided to leave the safety of my full-time job and throw everything into music. Luckily it’s worked out so far! I still think I made the right decision [laughs].

Was that video going viral quite a surreal experience?

Yeah, it was weird. As I mentioned I was working at a school at a time, so I would have a morning where my phone was going off and off and off and then I’d be back to being a teaching assistant in the classroom as normal, and then I’d get my phone out again and everything’d be going off. There’d be people ringing for interviews and my friends sending me newspaper articles and I was like, ‘this is so surreal!’ But it was amazing.

You mentioned you made a covers album when you were starting out – do you have a favourite song to cover live? And who would you like to cover one of your songs?

Ooh, wow! So mine change all the time. At the moment my favourite song to cover is Danielle Bradbery’s Worth It. I just love everything she does. Love that song. And if anyone could cover my songs… I feel like I’d love Danielle Bradbery to sing one of my songs! [laughs]

Do you have a bucket list for your career – venues you’d want to play, people you’d like to work with etc?

Yeah, definitely. I’m a bit of a geek and every December I make a dream board for the year – things that are really big and things I think I could work at. But C2C was on it this year, so it was really good to get this. And then last year Nashville Meets London was on there and I got to play that, so I put festivals like this on it. I’d really love to play Nashville Nights, CMA Fest, things like that. But I’ve got a long, long list of things I’d love to do.

So many! At the minute right now, Maren Morris’s Girl. Especially because it’s International Women’s Day and that is such a girl power song. I think it’s hard to write something like that without it being cheesy but I think she got it perfect in that song.

So I’ve just been announced to play at Buckle and Boots in May, so I’m looking forward to that. And then I’m going to go back over to Nashville to do some more writing. I go back into the studio in April, so I’ll have some more music out fairly soon as well. So just keeping on writing, releasing and gigging. Hopefully I’ll get that Nashville Nights thing I mentioned so you’ll see me there! [laughs]

Are there any plans for an album at all?

Right now I’ve not got any plans to do an album, but one day, definitely. I just don’t know when that is yet.