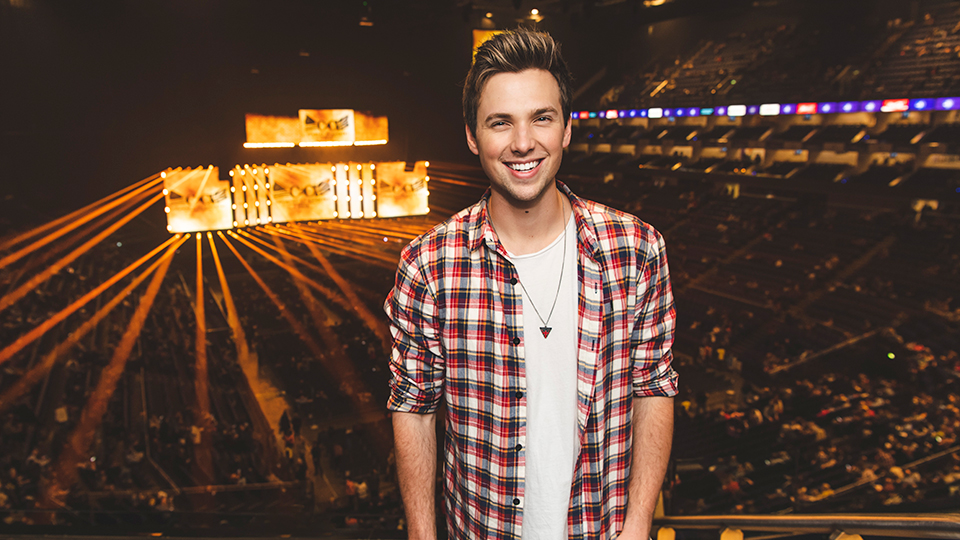 Noah Schnacky was one of the newer artists on the C2C: Country to Country line-up last weekend but by the end of the festival he’d won plenty of fans.

The singer-songwriter has released two tracks – Hello Beautiful and Maybe We Will – that have accumulated more than 50 million streams. A recent signing to Big Machine, Schnacky’s C2C appearances marked his first performance outside of the US.

I caught up with Noah during C2C to talk about the success he had before signing to Big Machine, discuss his unique connection with his fans, and to find out how he was finding the UK.

Welcome to the UK. This is your first time performing here isn’t it?

Is it quite daunting to make your UK debut at our biggest country music festival?

Oh man! Actually I was just telling someone it feels like I’m at home. It really does. I got over here and the people are so welcoming, and the atmosphere is so calm and respectful it’s really cool. It’s really, really fun. Man, the first day we got here we went and saw Aladdin, which was the coolest to me because my family’s huge into theatre. They love to go watch the arts. We had something called Bubble Wrap, which is like a Hong Kong waffle and ice cream and we had a great time. So far it’s just been really relaxing and a lot of fun. I’m super, super grateful for the opportunity to be here.

It’s great that you’ve had a proper chance to spend some time here and see somethings because a lot of artists have to fly in, do a show then fly straight out…

Yeah! Well there’ll probably be times where we need to do that too. This time was really cool because we took a few extra days and got in a few days early so that we could do something yesterday that was really, really important to me and really exciting. We went to the subway station, or the tube station as you guys call it, and we took that to a main train station and then we took a train to Reading. We hopped off and we hopped on a bus for like 18, 20 stops, ended up at this random address that we had found, through our ninja ways behind the scenes, at this fan’s house who had no idea we were coming. We had called her mom to get the address and everything. We were hoping that she wasn’t off at college and she ended up being home. We knocked on her door and we surprised her there, just like cold open without even telling her and she lost it. It was the coolest moment.

Giving your fans heart attacks on your first time in the country… good work!

(laughs) That’s we’re trying to do. It was the coolest moment to meet the people that I have cultivated relationships with on social media for so many years and to put a face to the name is the coolest experience. That’s what we did while we were here the first two days.

A pretty good way to introduce yourself to the country really…

Absolutely! And it was a great way to get to know the culture too because we got to see so much on the way to Reading from the train station and the different bus stops and the different little pubs and stuff. Very cool.

You had two tracks that came out last year. Since then you’ve had millions of streams and signed with Big Machine. Tell me a little bit about that journey and what it’s been like for you…

So on my 21st birthday we released my first song independently through a third party distributor and we had no idea what to expect. We were hoping for a decent amount of streams but I’d never done anything like that before. We knew we had good music but for three or four years before that we were just building an audience because we didn’t wanna release music until we knew we had a firm audience to throw it to. My fans absolutely blew me out of the water. We had a million streams in eight days and that was all independently no playlisting or anything.

The first year alone we had over 50 million streams on the two songs. The town kind of flipped upside down and things went nuts for us. It wasn’t to do anything with me, it is so much bigger and had to do with this anchor army behind me. We’ve been building and continuing that momentum and now we’ve created many songs behind the scenes and we’re keeping things going. Now we’re taking those songs that were huge, huge hits on the DSPs and making sure that we’re hitting our full audience. We want to reconnect that song to as many people as we possibly can, who may have not heard the song because they’re not on Spotify or Amazon or Apple. Then we’re going to take it from there.

That’s an incredible platform to start from. Clearly the fan energy and passion for you and your music is there…

What do you think it is about you and your music that’s connected with the fans?

I think it’s a lot bigger than the music. I think it’s about connecting with the fans on a person-to-person level. To me the music is only a message. What’s cool about music to me is that you get to make somebody’s day. You can make somebody smile that was sad. You can make somebody realise a point or perspective that they had never seen before. It can change how a person thinks. Being intentional with that is what separates what I think our music is doing. I love storytelling. I love the art of it but I think much deeper than just the craft of music is connection and remembering that it’s all about the fans. That’s what we do all the time.

We’ll go surprise a fan at their house to remind them that they’re loved and that they’re valued. In our live shows, if you’re coming to any later you’ll see it because it’s something we’ve turned into tradition, a few songs in there’s a song that’s not released yet that we’ll play live and we take a rose and we hand it out to someone in the audience. That to me is cool because it’s a moment where I get to look someone in the eyes and say, ‘you’re worth this and you’re worth the attention and you’re worth the love and the value that I’m giving you right now’. Other people can look in on that and say, ‘if she’s worth that then so am I or if he’s worth that then so am I’. I think that’s why our music connects, it’s because it’s a lot deeper than just music. It’s about us. It’s an army.

You’re coming up during a time when social media is integral to building a fan base and connecting with those who love your music, so that approach is really helping you…

Yeah. My dad has always taught me… our philosophy was that we were never gonna reach out to anybody. We were just going to create a stir and when it was time they would reach out to us because you can just be loud and people reach out to you nowadays. I think at its best, people can come alongside and help you with the vision but if you don’t have a vision yourself you’re kind of lost. There’s no amount of gasoline that can start a fire that hasn’t started. That’s where it all starts with me. I wanted to prove, and I wanted to prove to myself mostly, but to also the town and also the world and to my fans that this is going to happen and what we do and what we’re doing here is on purpose and it’s not an accident. I wanted to do that independently so that when we do have a team around us it only becomes an addition to what is already moving, where the branding is already done.