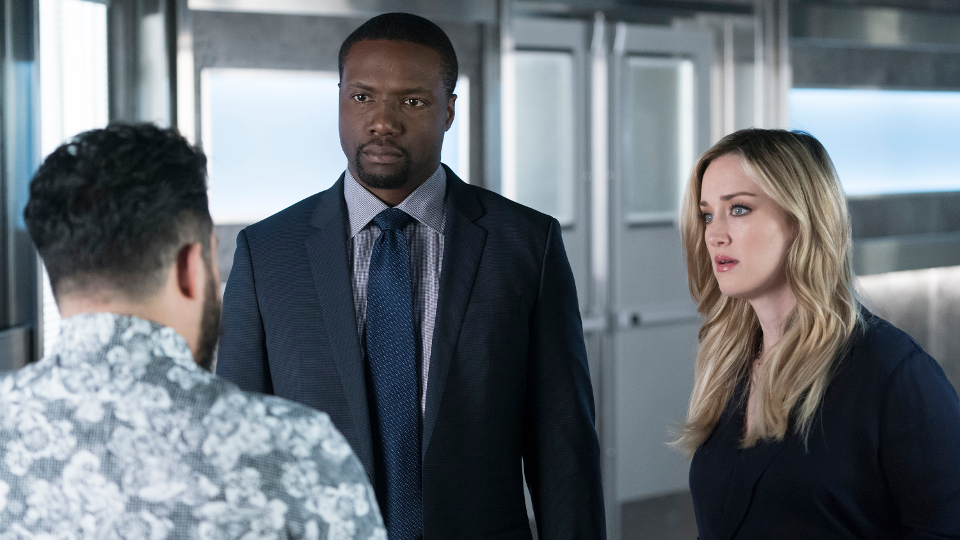 On the latest episode of Blindspot, Madeline (Mary Elizabeth Mastrantonio) put her plan to bring down a plane into action.

The location where Madeline took Zapata (Audrey Esparza) and Boston (Josh Dean) to perform the plane hack was wired up with C4. Madeline wanted to remove all traces of their operation as soon as it was complete.

Madeline revealed that the hack was to happen immediately and that they had three hours to bring down a jumbo that was already in the air. Boston was concerned at the limited time available, especially as a company called Bradley Dynamics were in charge of the security and they were the best in the business. Madeline wasn’t in the mood for waiting and left them to it. Zapata suggested he hack as much as he can without doing any harm to the plane or passengers.

Meanwhile, Weller (Sullivan Stapleton) and Jane (Jaimie Alexander) were off to talk a little romantic break. On the way they suffered a tyre blowout and with no phone signal decided to walk the rest of the way. Before they arrived the FBI arrived to take them back to the office to deal with the plane crisis.

Reade (Rob Brown) decided to pay Madeline a visit along with Patterson (Ashley Johnson) and Rich (Ennis Esmer). They pretended they were just returning her files while they swiped the device that Boston planted. While they got the device, they also left Madeline feeling suspicious.

Her suspicions were later confirmed when the real Del Toro arrived to speak with her. He explained about the situation with Zapata and how she didn’t arrive to their meet. Now knowing that Boston wasn’t the real Del Toro, she set the real one to hacking the plane. Eventually, Boston figured out that Madeline was on to them and his cover was blown so they tried to escape.

Back at the FBI, the team brought in the head of security from Bradley Dynamics. He revealed that the jumbo they worked on was the new Air Force One. The president wasn’t aboard but a lot of his staff and Weitz (Aaron Abrams) were. Weitz thought he was there for a meeting but the meeting was to fire him.

The team tried to contact Air Force One but Del Toro had blocked communications. With Weitz aboard, they eventually managed to contact him. Having just been fired he wasn’t in the best of moods but sprung into action once he realised why they were calling. He managed to convince the crew to let him speak to the pilot. The pilot laughed when she was told the plane had been hacked until she disengaged autopilot and realised that she had no control.

She was asked to reboot the plane’s systems but that didn’t help. Del Toro then dropped the cabin pressure knocking everyone out. The team realised that Del Toro must be hacking via an analytics server but they were locked out. A couple of presses from Rich gained him access and they shut the server down.

Meanwhile, Boston created a distraction with some C4 and a fake dead man’s switch. Zapata used her last bullet to kill one of the guards and knocked out the other. She then grabbed another gun and killed Del Toro. Boston got to work on disabling the hack as the plane was on a course for the White House.

What Rich didn’t realise when he disabled the server was that he locked Boston out. Zapata sent Boston outside with a phone to call Rich. She stayed behind to execute his code and hoped they could get it done before Madeline brought the building down. Rich put the server back online and Air Force One was saved. As Zapata was running out the building exploded but both she and Boston survived.

Back at the FBI, the house arrest on Boston was dropped and Reade offered him a job. He decided to turn it down and have some time for himself instead.

Weller and Jane headed home and cuddled up on the sofa. A knock came at the door and an envelope was pushed underneath. It was sent by the lawyer looking after Shepherd’s estate. Inside was a new picture puzzle for her to solve.

At the end of the episode, Zapata headed off to Zurich alone. Her aim was to retrieve files proving what Madeline had done. She also wanted to do this to show Reade that she’s still on the same side. He wasn’t keen about her going alone and he was right, just after she got hold of the files she was attacked by an unknown woman.

Can’t wait for the next episode? Read our Blindspot 4×14 The Big Blast from the Past Episode preview.