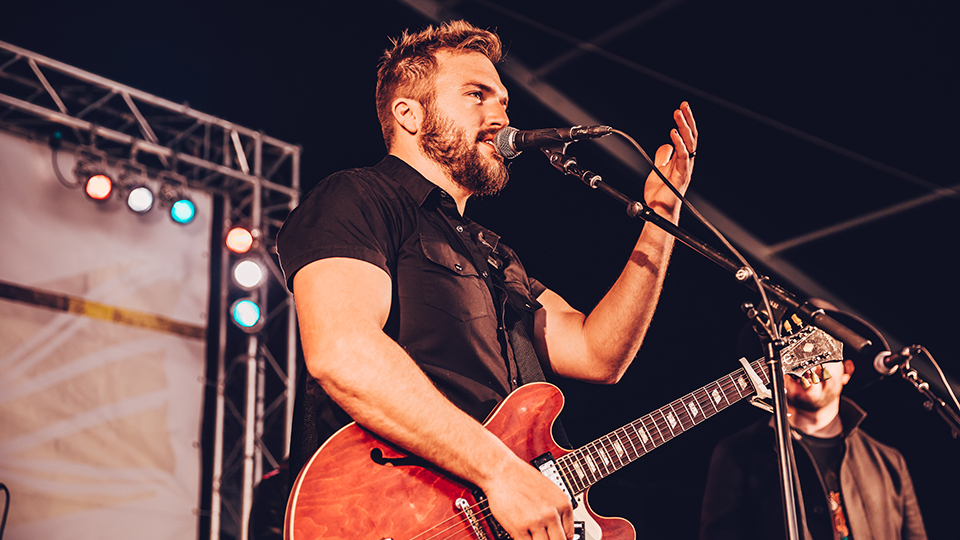 2018 was definitely a breakthrough year for Logan Mize. His song Better Off Gone, from 2017 album Come Back Road, was a huge hit, featuring on Spotify’s Viral Top 50 in multiple countries as well as their global chart, whilst CMT highlighted the video as one of their 10 Must-See Indies You Need To Know’. The track’s success has seen Mize set out on headlining tours in the US and now he’s over in the UK for C2C, with the job of opening the day at the Town Square Stage.

Accompanied by his three-piece band, Mize kicked off the set with Only In This Town, a song from his recent From The Vault YouTube series of unrecorded songs. It’s a rocky, driving number with a strong 70s vibe and I felt it really showed off the power and gravel in his voice. He followed that with Drinking Buddies, which had a laid-back, summery vibe and some great bluesy vocal touches, as well as good guitar playing.

Throughout his set Mize performed songs from across his back catalogue, as well as Come Back Road, allowing him to show off the range of his music – whether that was the laid-back, summery Drinking Buddies, which highlighted bluesy touches in his voice, or Used Up with its anthemic, soulful feel. He could also frequently be seen jamming with his band and looked like he was having a great time on stage.

Better Off Gone came midway through the set, and for me it was definitely one of the standout moments. Mize gave it more twang than the album version and added a stomping rhythm, which contrasted with the downbeat lyrics. He encouraged the crowd to sing along and their reaction at the end was absolutely huge.

Mize closed his set with Can’t Get Away From A Good Time, a rollicking barroom number which saw him playing the harmonica throughout the song and showing off the belt and power in his voice. He also got the crowd to join in and the result was a really fun end to his set that left me wanting to hear more.

For me Logan Mize’s set was a great introduction to his sound and an excellent way to kick off the C2C pop-up stages. His songs were the perfect mix of styles and he kept the energy up throughout, as well as having great stage presence. The only negative was I wished his set could have been longer! He’s definitely one to see if you can at C2C weekend and hopefully it won’t be long before he’s back in the UK.

See Logan Mize at C2C: Country To Country at The O2 in London this weekend: