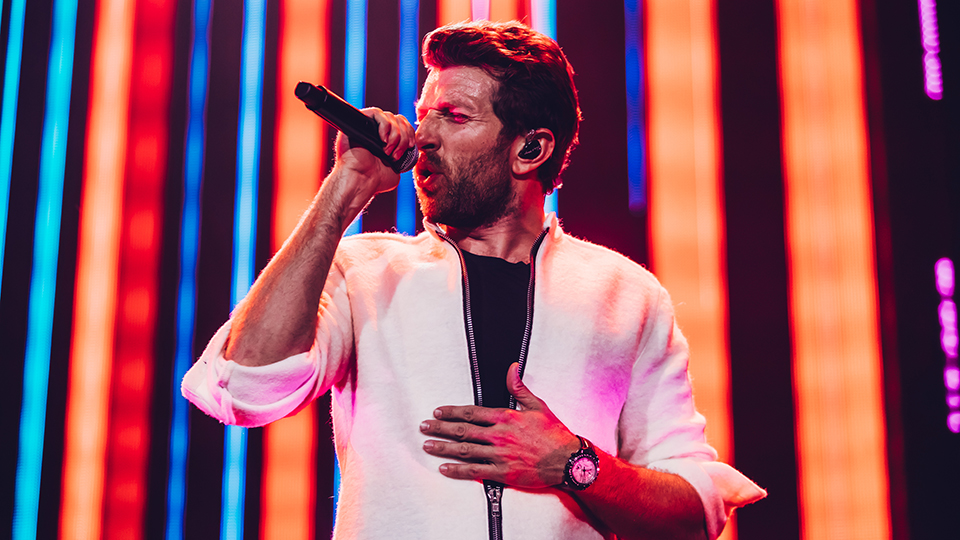 Inexplicably it’s been over three years since Brett Eldredge last performed in the UK, which was also his live debut on this side of the pond. Since then he’s released a Christmas album and a new self-titled studio album, and fans were just beginning to give up hope that he was ever coming back. Easily one of the most anticipated artists for this year’s C2C: Country to Country, Eldredge had pretty high expectations to meet.

Kicking off his set with a rockier version of Lose My Mind, Eldredge proved very quickly that he was going deliver a fantastic performance. With an enviable amount of energy, Eldredge bounced around the stage singing his heart out. It was a strong start to what turned out to be an incredible set packed with hits and fan favourites. Something I’m Good At came next and it turned the energy up even higher in the arena, which is exactly where it stayed for the rest of the set.

A cover of Queen’s Crazy Little Thing Called Love kept the party going and the song suited Eldredge’s voice down to the ground (although to be honest he could sing the phone book and people would want to hear him doing it). In the middle of the set, Eldredge played two solo acoustic tracks and they were the highlights of his performance. The personal Raymond was emotional and it was a real lump in the throat moment. That was followed by The Long Way before Eldredge’s band returned for a superb rendition of Mean to Me where the audience turned on their phone lights and lit up The O2.

Drunk On Your Love was another highlight with the crowd singing along to every single word. For The Reason, Eldredge mixed in a little bit of The Temptations’ My Girl, which worked nicely, and got the crowd singing once again. Wanna Be That Song sounded incredible in the arena and really brought out the anthem-feel the song has.

The final song of the set was Beat of the Music. The uptempo gem was the perfect way to bring the energetic set to a close and Eldredge looked a little overwhelmed with the incredible reception he received. For many in the arena it was their first time seeing him live and I’m sure they’ll be desperate to see him again.

Eldredge is a class act and he oozes charisma. There’s always a cheeky glint in his eye and his vocals are absolutely incredible. His range was really showcased tonight, as well as his fantastic catalogue of hits. I hope he doesn’t leave it three years before he’s back again and next time I want a full headline tour. Eldredge has a huge fanbase here and he should look into getting back here asap.