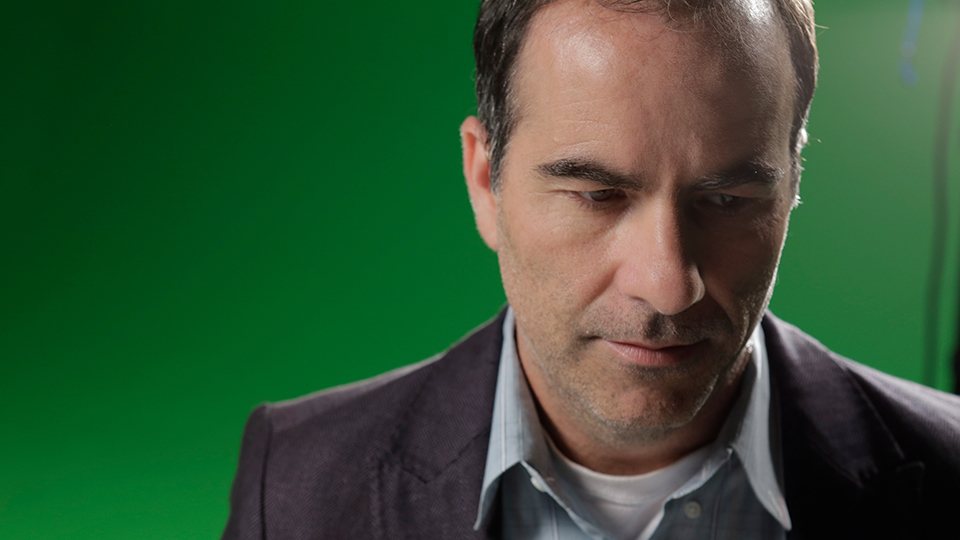 The supernatural thriller is a slow burner set in a psychiatric ward as a mystery unfolds across two narratives. Tackling issues around mental health, the film draws you in and keeps you gripped until the final moments.

I caught up with Billy to discuss the inspiration for The Dead Center, talk about the stellar performances from the two leads, and find out about the interesting camera work in the film.

Hi Billy. How are you and where does this Q&A find you?

I’m doing very well. Thank you for having me. I’m excited to be on the film festival circuit with my film these days – it’s really been wonderful to finally share this project with audiences.

Your film The Dead Center will be having its UK premiere at Arrow Video FrightFest Glasgow 2019. What’s it all about?

The Dead Center is a supernatural thriller that takes place in an emergency psychiatric ward. A doctor begins to question his own sanity when a mysterious John Doe shows up in the hospital, convinced he has died and brought something back from the other side.

I’ve had people close to me with mental health issues. A good friend of mine died a while back from an accidental overdose, and it deeply affected me. It got me thinking about people who suffer horrible losses. I mean, if your grandmother dies in her 80s, it’s sad, but there’s a certain level of acceptance to it. It’s the way it supposed to happen. It’s in the right order. You’re born, you grow old, and you die. But when someone close to you dies suddenly in a car accident, or from a terrible illness or suicide – I think you feel the randomness of death more. You feel the insanity. When we talk about grief, it’s most often about our sorrow and heartache, but we don’t talk as much about the insanity that comes with it.

Shane Carruth is magnificent as lead character Dr. Forrester. How did you get him involved with the film and what do you think he brought to the table?

Isn’t he great? To tell you the truth, I just got lucky that he connected to the material. I found a way to get him the script, because I thought he would be perfect for the role. He loved it and wanted to come on board. I think, for him, this was a kind of experiment – acting in a lead role where he’s not the writer or director. Shane brought so much to the table. He truly understands independent filmmaking. And he has been absolutely committed to this project. His influence went beyond his role as an actor. He helped me early on with the script and through the edit process. The man is a true artist, and it was privilege to have worked with him and gotten to know him.

Jeremy Childs is terrifying as the John Doe. What we he like to work with?

Jeremy Childs is the real deal. He and we have been working together now for almost 10 years. He’s been in several of my short films and was the lead in my last feature, Closer to God. He’s a very serious and prepared actor. And this role was incredibly nuanced and difficult. We worked very hard on it for several months, trying to get each state of consciousness he would go through just right. I believe our work paid off, as you watch the arc of Michael Clark’s slow and steady death turn into this terrifying entity over the course of the film.

There is some really interesting camera work throughout the film, especially the moments near the beginning when you see through John Doe’s eyes. Why did you choose to put those kinds of shots into the film?

The entity in the film forms inside Michael Clark, attacking his core self – his memories, identity – until it can fully take over his body. And it’s a gradual process. I wanted the audience to experience this process develop throughout the film. I wanted them to feel what Michael feels. Hence, the intricate internal soundscape, all the quick flashes of the various souls processing inside him, and of course, the POV camera work.

What would you say was the biggest challenge when making this film?

The budget. As always, there’s just never enough money in independent film. It’s a miracle anything gets made.

If you could have written and directed any horror movie, which one would it be and why?

I would have liked to have been making films in the 70s. I feel like I’m constantly drawn back to these films. Especially the genre films of the era – Andromeda Strain, The Wicker Man, Invasion of the Body Snatchers. These are very big influences for me. And I would’ve gotten to work with that wonderful film stock.

Why should people check out The Dead Center during Arrow Video FrightFest Glasgow 2019?

I think it’s extra special to catch films at festivals like this – you’re watching with other film lovers, and it’s a great opportunity to meet likeminded people. I’m thrilled to be able to attend FrightFest Glasgow for the film’s UK premiere and to engage with the audience in person.

I’m collaborating on a couple of projects. One is an Iranian spy adaptation that I was commissioned to write. And the other is hopefully my next directing project. It’s a little too early to talk about the details, but it’s an American thriller in the vein of Straw Dogs and Deliverance.