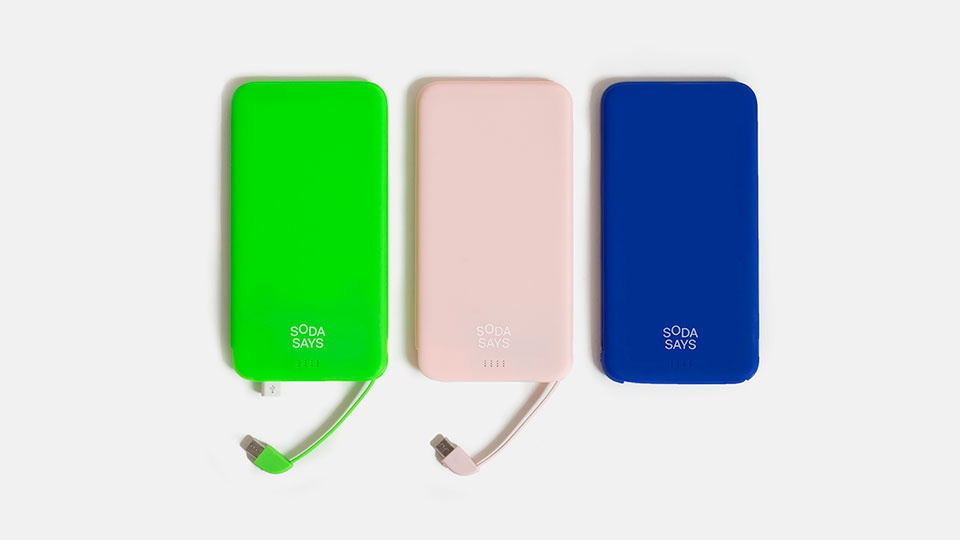 Keeping your phone charged is an on-going problem that anyone with a smart phone faces. No matter how new or top-of-the-range your phone is, after a year or so the battery life starts to deteriorate making it difficult to be away from a phone charger and plug socket for more than a few hours. Many companies have released power banks and charging cases to try and tackle the problem, and as any phone user knows spending your money on one is a complete gamble.

Soda Says have recently released The Super Power Bank, which aims to resolve the age-old phone battery problem. Slightly smaller than an iPhone 7 and weighing around 100 grams, the slim-line power bank has a rubberised exterior (available in green, blue and pink) making it easy enough to slip into your pocket or bag. The Super Power Bank is packaged with a USB charging cable that plugs into the right side and it takes around 3 to 4 hours to fully charge it. An LED indicator on the front features four bars and they light up one-by-one as the charging progresses.

One of the advantages of The Super Power Bank is that it’s actually quite flexible. There’s an in-built USB port, that opens the power bank up to charging a variety of smart devices, and an iPhone lightning adapter that sits snugly in the bottom. On the bottom left corner you’ll notice some ridges and this is where you gently apply pressure to in order to reveal the micro-USB, the iPhone lightning adapter and the USB port.

The Super Power Bank claims to recharge your phone roughly up to three times. This is the aspect of the device that I feel falls short. After fully charging the power bank I tested this out on several occasions and I didn’t find I could fully charge my phone more than one and a half times. I also tried using the power bank to charge my iPad mini and I got just over one full charge from that. Having used a variety of charging cases in the past as opposed to power banks, I found this a bit disappointing as someone who uses their phone a lot day-to-day I ended up having to carry my old device around as well as The Super Power Bank to ensure I never lost power.

At a cost price of £30.00 The Super Power Bank is definitely on the cheaper end of the spectrum for this type of product. I would say it’s perfect for those people who use their phone moderately but for heavy users, it’s likely not going to be satisfactory enough. If you need to top up your phone’s juice once or twice a day, this is the product for you, but if you need multiple fully charges, The Super Power Bank isn’t going to achieve that for you.