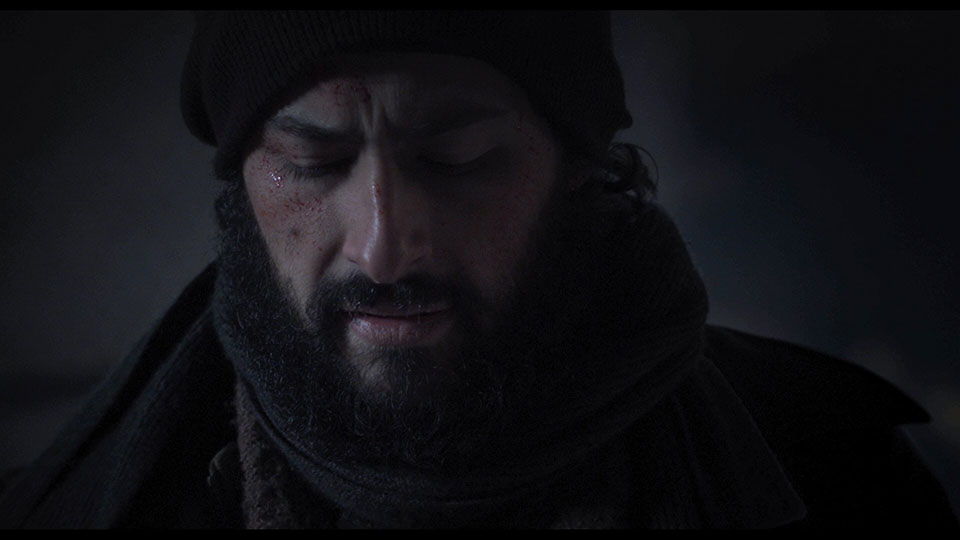 Former MMA fighter Hunter (Jason Kellerman) lives a paranoid life on the streets in Chicago following the brutal murder of his mother and sister. Attempting to get a roof over his head, Hunter reluctantly agrees to a rehabilitation programme where he has to speak with counsellor Danni (Rachel Cerda) in order to stay in a local shelter. Initially he refuses to open up but once he starts to deal with his past, Hunter turns his attention to the gang that killed his family, who he believes are still committing murders around the city.

Hunter is an ambitious low-budget horror thriller written by its star Jason Kellerman and directed by David Tarleton. A slow burn, the film takes its time to reveal its hand allowing the audience to get acquainted with Hunter and Danni, as their relationship unfolds on screen. In the first half hour, Hunter does a good job of keeping you guessing as you try to figure out if Hunter is perhaps mentally ill or if he is indeed onto something in terms of the killings he thinks are taking place around Chicago.

We see glimpses of the gang’s ring leader Volakas (Nick Searcy) and his henchman, who are using a young man named Luke (Ryan Heindl) to help them find people to kill. That part of the film is uncomfortable to watch and handled with enough menace to unnerve even the toughest of viewers. I can’t really say much else about this aspect of the movie as it would give away something pretty major that’s integral to enjoying the film.

Kellerman has tried to do something different with his script for Hunter. He positions it more as a character piece but it’s clear he has his eye on turning it into a series. For the most part it works but the script could have done with a little more spit and polish. Some of the exchanges between Hunter and Danni are clunky, one in particular sees Danni discussing the juxtaposition of Hunter’s past career as a fighter and his inability to be confrontational in his own life. It’s little moments like this that jar and pull you out of the story.

Another aspect I didn’t feel worked was the forced, and inevitable, relationship between Hunter and Danni. You know from the moment they meet where their relationship is going but it doesn’t make it any more believable. Danni makes some seriously immoral choices given that she’s in a position of power and she says out loud many times that she’s making poor decisions. This just makes the exposition clumsy and it patronises the audience a bit too much.

Jason Kellerman and Rachel Cerda are solid enough in their roles. Their chemistry is limited but they are believable in their respective roles. Kellerman could have dug a little deeper into his character’s psyche to really help propel the audience along on the journey with him. Nick Searcy has fun as the villain Volakas but he doesn’t get nearly as much screen time as he ought to have.

Hunter is an entertaining enough watch but it’s not ground-breaking stuff. A loose script lets it down and the slow reveal of the mystery may prove to be a turn-off for some viewers. That having being said, Kellerman shows a lot of ambition here and I think another crack at the whip with a sequel would put right a lot of these issues. Hunter at least attempts to do something different from other horror thrillers and while it may not be wholly successful, it’s a decent way to spend 90 minutes.