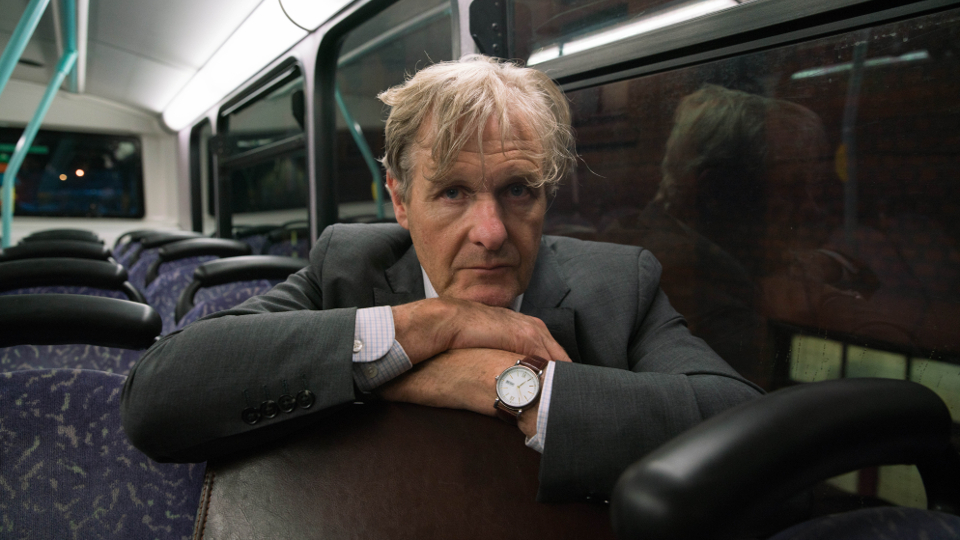 On the latest episode of Cold Feet, David’s (Robert Bathurst) problems went from bad to worse.

The episode opened up with David sleeping in his car on the streets of Manchester. He was woken with a start by a guy emptying bottles into a recycling bin. Jenny was off to her hospital appointment and turned down a lift from Pete (John Thomson). Karen (Hermione Norris) and Adam (James Nesbitt) were seperately thinking of their festival kiss. Karen looked mostly concerned while Adam seemed to be wondering if it could turn into more. He phoned her but she avoided his call.

Adam headed to see Pete and found David coming down the stairs having just had a shower. Still keeping his problems to himself he said Nikki’s boiler wasn’t working and that he needed to borrow the shower as he had a job interview.

Pete spotted that Jenny had left her bag and decided to drop it in at college for her. He took Adam with him but she wasn’t at college. Still suspicious that she was seeing her tutor Ian, Pete decided to use a family tracking app on his phone to find out where she was and who she was with.

Jenny was at the hospital with Karen and they were finding out about her breast cancer and next options. Karen took notes and the pair asked questions. The nurse told Jenny that the cancer could be treated but that she needed surgery. Her options were a mastectomy or lumpectomy. She decided to go for the lumpectomy and was told that she would be able to use a cold cap to try and prevent losing her hair.

As they left the hospital, Pete and Adam pulled up outside. Confused, Pete went to find out what was going on. Karen took Adam to one side and told him about the cancer. Adam was shocked, in the background you could see Jenny and Pete embrace as she gave him the terrible news.

David went to look at a house to rent and said he’d be able to put down the money for it at the end of the week. His plans all hung on him landing a new job. He told the landlord that the job was in the bag so he’d be in touch. He later went for the interview and discovered one of the interviewers was an old intern that he hadn’t treated very well. He didn’t get the job.

Pete was understandably worried and upset that Jenny hadn’t told him. She wondered how they had found her at the hospital. He confessed that he knew something was up but that he thought she’d been having an affair with tutor Ian. Relieved that she wasn’t he told her that he loved her. They chatted about her options and she explained her decision.

Adam went back to Karen’s and he decided to confront her about their festival kiss. She said it didn’t mean anything and that it was just because they were stoned. Adam wasn’t sure what to do and before he got a chance, Karen’s illustrator friend Caitlin Henderson (Eve Myles) turned up for lunch. Karen set them up on a date to the theatre.

David found a car park where he planned to spend the night. He gave his brother a call to beg for money but he told him where to go. A nearby car kept flashing it’s lights at him so he flashed back. What he didn’t realise was that he’d parked up in a place popular with doggers. When it finally clicked what was going on he left.

Adam and Caitlin’s date went ok but neither of them enjoyed the theatre. They left for the pub and quickly ended up back at his place. Worried it was going too fast, he excused himself to the bathroom and called Pete and Jenny for advice. Back in the kitchen, Caitlin called Karen for advice as well. Their night was interrupted when David popped round and Adam invited him in for a drink. He ended up staying and the next morning nicked £20 that was left out for the cleaner.

As the gang rallied around Jenny, Pete tried too hard to make sure she was resting and kept arguing with everyone. The day of her surgery they all visited her in hospital. There she met hospital Chaplain, Reverend Daniel Booth (Paul Kaye) who came to see if she needed a chat but she sent him away.

David went to the employment advice center to see what benefits he qualified for but was told he needed to wait 13 weeks as he’d walked out of his job. Outside he found his car was being towed, leaving him with pretty much nothing but the clothes on his back.

Went Jenny went down for surgery, she arranged for Pete to go to the driving range with Adam. Karen came across Dan again and ended up buying him a coffee. They chatted about their jobs and he said the Mission where he worked wase always keen for clothes donations.

Jenny came round from her surgery and was in hysterics from the anaesthetic when the gang came to visit. After they left, David stayed behind and spent the night in a hospital corridor. Dan came across him and covered him with a blanket and left him a leaflet about the Mission.

Adam and Caitlin had a second date which seemed to be going a lot better. Again back at Adam’s things were going well until he needed the loo. When he came back he found that his son Matt (Ceallach Spellman) had come back hammered from a night out. As he was vomiting in the kitchen sink, Caitlin decided it was best that she went. She and Adam shared a quick kiss before she left.

Back home, Karen decided to bag up a bunch of old clothes, and some of Ellie’s (Sylvie Briggs) because she wouldn’t tidy her room. She took them down to Dan at the mission who was delighted with the donation. He offered to take her for a coffee sometime and she agreed.

Later, David popped into the Mission and found a suit jacket that fit perfectly. That’s because it used to be his and was one of the items Karen donated. Dan asked David if he needed a bed for the night but he turned it down.

At the end of the episode, with nowhere to go, David rode the night bus.

Can’t wait for the next episode? Read our Cold Feet series 8 episode 5 preview.