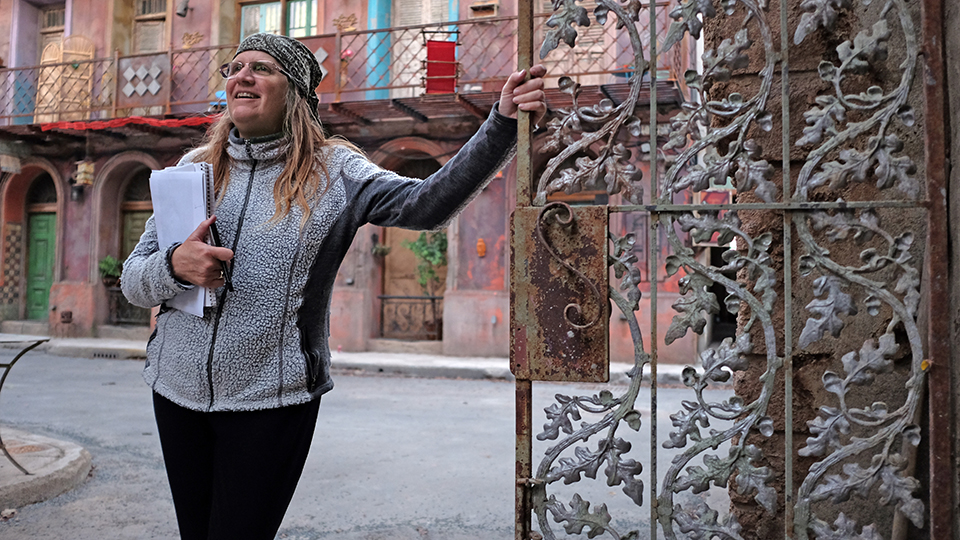 Alita: Battle Angel arrives in UK cinemas this week and anticipation for the film is high.

A collaboration between Robert Rodriguez (From Dusk Till Dawn) and James Cameron (Avatar), the film is a highly stylised action film that breaks new ground visually. Find out what we thought of the film.

Ahead of the film’s UK release I caught up with Caylah Eddleblute, the co-production designer for the film, to discuss how she brought the incredible film to life and discuss what her biggest challenges were.

Hi Caylah. How are you and where does this email Q&A find you?

Let’s start off by finding out more about your job. What exactly does a production designer do?

As a Production Designer you’re part visionary and part conduit. It’s your job to ground the narrative, to create an environment you can taste, smell and touch. With a great director and DP, you can achieve that.

You create a space where actors can perform, where they have the boundaries, the set pieces and the props that bring their characters to life.

Add to that logistics. In short, make sure the shooting crew can do their job in the environment you’ve created. For example, we wanted to make the sets in Iron City expansive enough to provide great depth of field. That quality is what makes a city feel real.

You are the co-production designer for Robert Rodriguez’s new film Alita: Battle Angel. The film has a very striking and distinctive look. What was your aim when you started work on the film?

A clear part of the vision on Alita was to create a city, that was vibrant with life, even though a certain oppression exists in the story line. People still laugh, still play, still hope. A key visual theme: diversity. It shows in the architecture, the graphics and signage throughout Iron City.

What would you say was the biggest challenge for you and why?

We had a fantastic crew on Alita. I looked forward to walking into Iron City every day. At any given moment there were a multitude of challenges. You takes those challenges, one question, and one answer at a time. I keep imagining I’d like a device that could count the number of decisions made in a day.

Where did you find the inspiration for the film’s incredible settings?

Steve Joyner (we co-designed Alita) and I have traveled all over Mexico with Robert. Guanajuato, San Miguel, Jaral de Barrio. We’ve also traveled through Panama, including Panama City. We structured Iron City’s footprint based in large part on our observations from there. An old city core of stone ruins, Latin American colonial architecture and utilitarian neighborhoods built over the old were a perfect reference.

Concept art Jim Cameron commissioned early in Alita’s gestation included considerable reference from Cubas’s grand and fading architecture as well. In addition Jim referenced the Kowloon Walled City, a part of Hong Kong bulldozed in 1993. So the melting pot of neighborhoods developed. We were able segue these diverse visual cues together, the way real cities and neighborhoods evolve.

You’ve worked with Robert Rodriguez many times in your career so far. What do you like about working with him?

Robert is an efficient, surgical thinker. There’s no waste. Maybe this comes in part from his training as an editor. This gives him a clarity. He slices through the muck to simple, effective solutions. I think the thing that lets us thrive is he has confidence in us. He allows the process to breathe. Steve and I endeavor to pass that philosophy on to our crew.

How did you get into production design?

I was trained as a writer and photographer.

Like so many people in this industry, my first job was as a production assistant. A few movies later I met Steve Joyner. (We co-designed Alita). We were working in the Art Department on a modest feature. He was building set dressing. I was picking up lumber orders for the Construction Department and learning how to build flats. Our work ethic synced. We were self motivated. Eventually we teamed up and established ourselves as a Property Department. We spent several years working on movies of the week. Trench training. From that vantage, we learned a great deal about set design, what works, what doesn’t. We learned what mattered on set, to the director, to the DP. To the actors.

It was Robert Rodriguez who took a chance on us. We had zero big feature experience under our belt. Yet Robert hired us on “From Dusk till Dawn.” It was on Grindhouse we stepped into the official role of Production Design. So it’s amazing to be here today, to be part of the collaboration between Robert, Jim Cameron and John Landau and the hundreds of talented crew that brought Alita to life.

Along the way one encounters diverse paths to the creative process. There is a saying I think of just now. “Opportunity usually comes disguised as hard work.”

Be disciplined about the basics. Show up on time.

For me, that has always meant “show up early.” Be diligent. Learn everything you can about all other departments and the challenges they face. This will make you a better designer. And always, observe the world around you. The grand vistas, and the details. Observe the play of light in your surroundings. How does light evoke mood, emotion? Start to register those cues.

What’s one film you wish you could have done production design for and why?

I’m enamored by all styles of production design and shooting style. Observing how other people translate a story is riveting. What is happening on the small screen… wow. True Detective, Homecoming. I’m just getting caught up on Westworld. High end stuff. And distilled down at the same time.

There is something on dancing on the horizon, but of course mum is the word. Nothing is until it is. This is a dynamic, fluid way of life. Always unpredictable. The most important personal project for the moment I think is to go stare at the fish under the sea for a bit. And get my sketchbook out!

Alita: Battle Angel is released in UK cinemas on Wednesday 6th February 2019. Watch the trailer below: