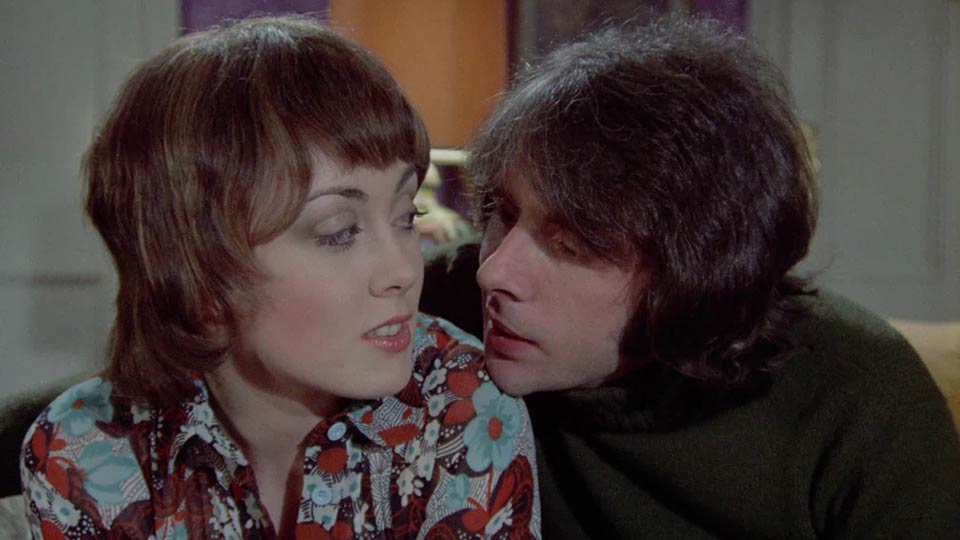 A spate of classic British situation comedies from the golden age were given the big screen treatment. The turn of Man About the House came in 1974, courtesy of Hammer Films, only a year into the beloved sitcom’s run on television.

Richard O’Sullivan plays Robin Tripp, a young man with a cheeky, wonky smile and a penchant for sophisticated cuisine, who shares rented accommodation with single ladies Chrissy (Paula Wilcox) and Jo (Sally Thomsett). We’re introduced to him shaving in the bathroom whilst Jo bathes, and he later engages the women in a game of strip poker in an attempt to get them naked. In a sign of the times, O’Sullivan is frequently shirtless, and was something of a sex symbol at the time, despite his average physique and natural body hair. Refreshing. He’d have to reveal a waxed six-pack these days.

The trouble with feature film versions of sitcoms is that it’s almost impossible to sustain the fast-paced structure of a half-hour episode for three times the length, and the premise can become stretched beyond all reason. Man About the House for the most part avoids falling into this trap. Writers Johnnie Mortimer and Brian Cooke, who were behind several successful sitcoms, find an overarching story (the tenants have to fight against losing their apartment when a nefarious property developer attempts to buy the tenement block). Interspersed with this set-up are many short scenes that are effectively sketches serving the story. This allows a host of great guest actors to take cameo roles, from Bill Maynard as a disgusting chef to Bill Pertwee and Johnnie Briggs as delivery men and Michael Robbins as a doorman. Some are gratuitous – especially Spike Milligan’s appearance as himself which is funny but distracting. A cameo by the stars of Love Thy Neighbour may raise eyebrows in these more PC times, but it is a decent subversion of expectations.

Overall, the story doesn’t quite hang together and runs out of steam once Patrick Newell is introduced as a corrupt MP and the action transfers to a television studio. The writers fall back on the charm of the main characters to carry the audience through to the end.

The film also features George and Mildred Roper (Brian Murphy and Yootha Joyce), the landlords who also featured in the sitcom and later earned a much-loved spin-off series that saw them living out their unhappy marriage in the suburbs. The chemistry between the five main characters is excellent. Whereas Robin is desperate for sex with either woman, neither of whom is especially interested, George Roper lives in dread of having to perform his “duty” with his sexually-frustrated yet voracious wife. The contrast is what drives the humour.

Man About the House also features comedy legend Arthur Lowe (Dad’s Army) as the ruthless head of the property firm, but it’s Peter Cellier as his oily right-hand man who is the most impressive amongst the actors not connected to the sitcom. A running joke about him needing to use the toilet would cease to be funny long before it actually does, thanks to Cellier’s skill. The location filming in and around London, in all its mid-1970s glory is another major plus point – the decade in which it was made is stamped through the production like a stick of rock.

Man About the House has been brilliantly restored for this Blu-ray release. The picture is sharp and clean, and the colours vivid. Were it not for the very obvious period, it looks like it could have been made yesterday. Compare and contrast with the unrestored trailer, which appears on the disc as an extra feature, to see how good the restoration work is.

Although Man About the House isn’t a film to change lives, and the plot about saving the housing block is thin, it’s a diverting and funny hour and a half that retains a lot of the charm of the TV series. If you’re a fan of classic British comedy, Man About the House has more than enough to recommend it, and plenty of laugh-out-loud moments along the way.