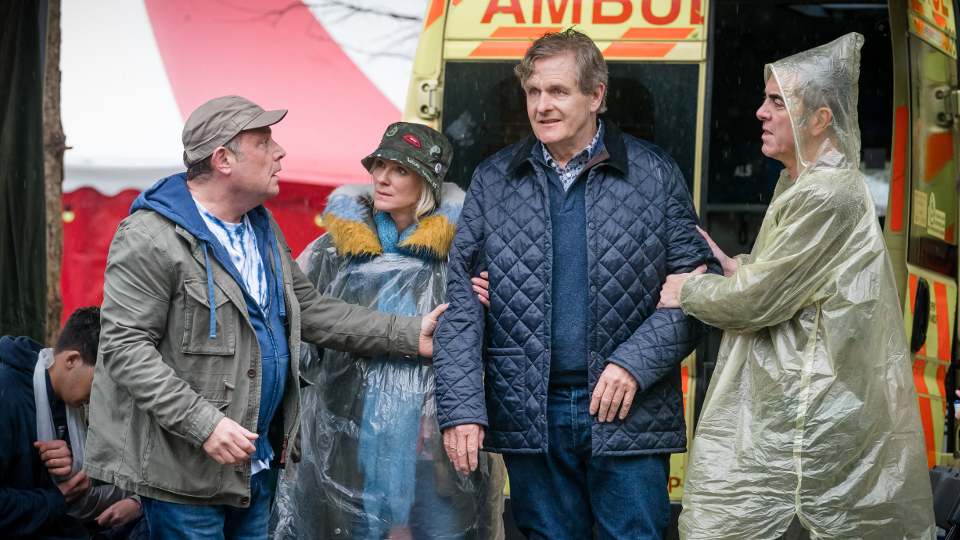 On the latest episode of Cold Feet, the gang went to a music festival to support young Adam (Jack Harper) and his band.

At the start of the episode, everyone was busy getting ready for the upcoming festival. Adam (James Nesbitt) and Pete (John Thomson) went shopping for camping equipment. Pete had something niggling in his mind that something wasn’t right with Jenny (Fay Ripley), Adam thought he was probably worrying about nothing.

Adam wanted to buy a two-man tent for himself and his son Matt (Ceallach Spellman). He still forgets that Matt isn’t a little child anymore and Matt was hoping to attract some female attention. Adam offered to go for two single tents instead but Matt said it was ok.

Meanwhile, David (Robert Bathurst) was leaving Nikki’s (Siobhan Finneran) after suggesting they break up last episode. Nikki had left him an envelope with a note to leave his key but take care. Inside the envelope she’d left him some cash, knowing how skint he was. David initially pulled his face at the money but then decided it was probably best to take it. He checked himself into a hotel.

The next morning, David paid for his hotel and couldn’t believe that breakfast wasn’t included. He checked his bank balance and realised the £12 he had left wasn’t going to cover it so he’d have to go hungry for now.

Pete had made Jenny breakfast in bed and caught her acting suspicious on her laptop. He asked her about it but she said it was nothing. As soon as he left the room she was back on it. She was looking up information about her cancer diagnosis which she had still decided to keep a secret.

Later, she went for another cancer appointment. There she ran into the same guy she met last episode. She was able to talk about things to him a little and he said she’d know when the right time was to tell her friends and family. Back home everyone was sitting down for dinner. She said she had something to say but bottled it and instead said how proud she was of young Adam.

The next day when they were all headed off to the festival, Pete managed to sneak a look at Jenny’s laptop. She’d left her social media open and he saw she’d posted about the festival. Her tutor had replied that he was going and it set Pete off again wondering if something was going on.

At the festival the gang went to pitch their tents. Before they split, Nikki had paid for a luxury yurt for her and David. He didn’t want everyone to know about the split so made up a story instead as to why she couldn’t be there. He was surprised to find that there was no food in the yurt so tried to go and get a burger but he couldn’t afford it. Instead he found a nice young man selling biscuits, what he didn’t know was that they were laced with drugs!

As the festival got underway, Jenny left Pete to sort the tent. She went off with Karen’s (Hermione Norris) daughter Ellie (Sylvie Briggs) and her college mates. Jenny was determined to make the most of the festival and led the group in many rounds of shots. Pete tried to get hold of her to come and watch their son and his band practice but the music was too loud.

On his way to watch the band practice, Pete came across David wandering around aimlessly, off his face on drugs. They headed to the band practice and Pete was loving it until his son said they’d manage without him. Before he left, they realised that something was wrong with David who promptly collapsed.

Elsewhere, Adam was hanging out with Karen. The pair chatted about their youth and Karen dragged Adam into a silent disco. He wasn’t keen on the idea but once he got some headphones on he relaxed and let himself go. The pair had a whale of a time dancing about like idiots. When they left the disco they came across Pete who was with a worse for wear David. Pete was sure that David’s blood sugar was just low but Adam realised the real cause of his problem. He suggested David go and sleep it off.

The gang eventually got together to watch the band play. Pete walked into the main tent just as Jenny had come across her tutor and was giving him a drunken hug. Pete wasn’t happy but couldn’t say anything. The group watched the band and were very impressed. Jenny stepped out for some air and vomited before getting really upset.

After the show, Adam found a spliff and suggested he and Karen smoke it. They did so and ended up stoned, sat together talking nonsense. Adam came up with the idea that they should go to a festival every 20 years. Karen wondered if they’d still be friends. He made her ‘pinky promise’ and then out of nowhere they kissed. They were interrupted by Karen’s mobile, she answered and there was a very upset Jenny on the other end.

As Karen rushed off, Adam looked like he’d fallen in love. Karen found Jenny who was still upset. She came straight out with it, that she had breast cancer and Karen comforted her. Jenny sobbed and told Karen that she was really scared. Karen took Jenny back to her tent and told Pete that she was just drunk and sleeping it off.

Adam tried to go back to his tent alone but found that Matt has beaten him back with his new female friend. Adam instead went to David’s tent where he had a beer with Pete while David recovered. Pete tried to talk to Adam about things but David suddenly piped up that Pete had a perfect life and nothing to worry about. Adam agreed.

As the gang left the festival, they left David sat in his car. He turned on the sat nav and realised that he had nowhere to go.

Can’t wait for the next episode? Read our Cold Feet series 8 episode 4 preview.