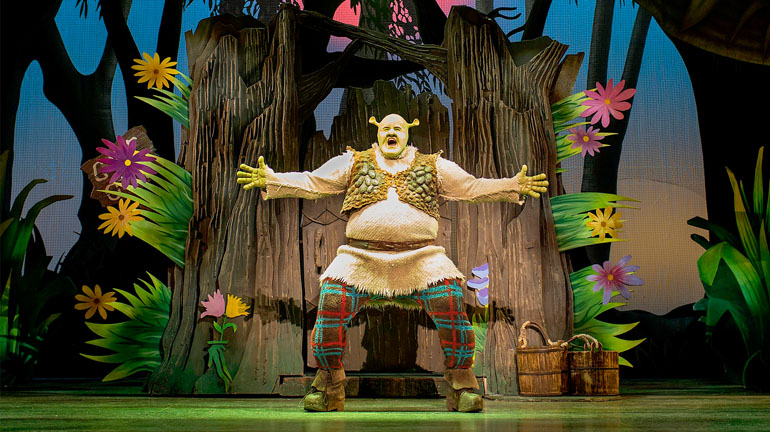 This Christmas see Shrek The Musical – the larger-than-life show based on the Dreamworks hit movie – at Leeds Grand Theatre from Tuesday 18th December.

Join unlikely hero Shrek and his loyal steed Donkey as they embark on a quest to rescue the beautiful (if slightly temperamental) Princess Fiona from a fire-breathing, love-sick dragon. Add the diminutive Lord Farquaad, a gang of fairytale misfits and a biscuit with attitude, and you’ve got the biggest, brightest musical comedy around.

Featuring all new songs as well as cult Shrek anthem I’m a Believer, Shrek The Musical brings over 100 much-loved fairy tale characters, plus a 14-foot dragon, to life in an all-singing, all-dancing extravaganza.

Nigel Harman returns as director, having made his directorial debut on Shrek The Musical’s first UK and Ireland Tour. Best known for his television and stage work, Nigel Harman originated the role of Lord Farquaad in the West End production, winning the Olivier Award for Best Performance in a Supporting Role in a Musical.

On its debut UK tour in 2014, Leeds Grand Theatre was the first venue outside London to host the family show welcoming director Nigel Harman and the cast to its rehearsal space before the show opened.

Nigel Harman says: “I had so much fun directing the original UK & Ireland Tour that I jumped at the chance to work on it again. Shrek the Musical has created pivotal moments in my career – firstly winning an Olivier and then my directorial debut. It’s certainly become one of the classic family musicals of all time and I’m really proud to be a part of it.”