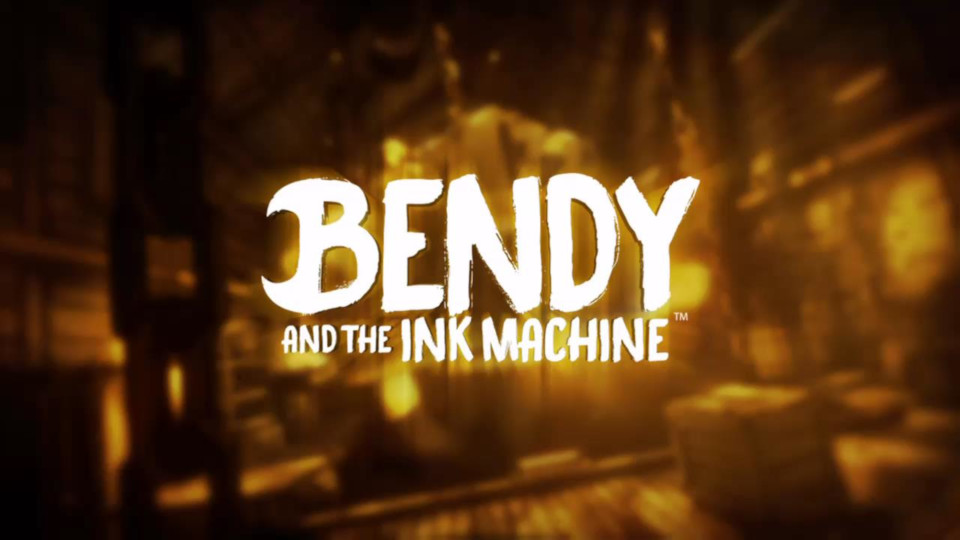 Bendy and the Ink Machine is a first person horror puzzle game with a bit of combat thrown in for good measure. You play the role of Henry Stein who has received a mysterious letter inviting him back to his old place of work, the Joey Drew Animation Studios, only to find that the studios have been taken over by an evil force manifesting itself as the dreaded Ink Machine.

The game has a very unique artistic style and really pulls off the old animation studio feel with everything being drawn in a 30s style. Everything has a rough black pen drawn outline and really sets the scene well as you can see from the screenshots. The style doesn’t deviate much throughout the game, bar a cut scene near the end, and the themes get increasingly more sinister as you progress.

View the Bendy and the Ink Machine launch trailer below:

The game starts off pretty slowly, literally as your character walking speed isn’t much faster than a shuffle and you don’t unlock running for a while, as you get acquainted with your surroundings and mainly consists of find this or that item and bring it to specific place. Most of the puzzles are like this or you might be required to turn on a number of switches rather than find items. This was easy enough although some items were tricky to find given the limited colour palette in use, this was despite the fact that the items you need give off a slight glow. I also found it a bit tricky to keep track of where I’d already visited as everything starts to look the same after a while and there is no map. You are also required to backtrack somewhat as doors that were previously locked become usable as you solve various puzzles. You will also find various tape recorders scattered around that play an audio log and help fill in some of the back story.

Chapter 2 is where you will start to experience the combat aspects of Bendy and the Ink Machine. Your starting weapon of choice is an axe that you can use to cut down boards blocking doorways. You can also use your axe to stick it to the ink monsters that you will start to encounter. Combat is clumsy at best, you only have one attack option and that is simply to swing your axe and you have no way of defending yourself other walking backwards. I found the timing to be way off and didn’t feel any connection to the timing of my button press to the action on screen. After a while I simply found myself walking backwards whilst flailing blindly with my axe. Luckily the enemies early on only take one hit to kill but later in the game this became very frustrating.

It isn’t until chapter 3 that I felt the horror aspect really started to kick in. Don’t get me wrong it’s pretty creepy throughout but it really goes up a notch as you progress. The monsters you come across are far more sinister and take more hits to take down and some can’t be killed at all requiring you to hide in a handy cupboard while it makes its way past. If you do get caught by one these ink demons, and you will as they are damn fast, then you are sent back to a checkpoint in the chapter that’s usually not too far away from where you got ‘inked’ and you don’t lose any of your progress so the game is pretty forgiving in this aspect. One of my favourite ink monsters has to be the projectionist who literally has an old school film projector for a head. You can see him in the screenshots below as I bravely hid in a cupboard waiting for him to pass.

There are some interesting characters to find as you progress and I won’t go into too much detail to avoid spoilers in the story but you’ll certainly remember the bonkers Alice Angel. Boris the wolf will also forever hold a place in my heart. I’ve never seen a game character seem so forlorn without uttering a single word, Eeyore from Winnie the Pooh hasn’t got anything on poor Boris whose only joy in life comes from a can of bacon soup. On the subject of bacon soup, it’s absolutely everywhere. I had to google what it was for and there are suggestions out there that it replenishes your health but is used instantly so I’m not convinced by that theory and there is no inventory to access so I can only presume it’s an achievement of some sort and just a quirky aspect of the game. Either way I felt compelled to collect every can I could find!

If you were to remove the artistic style and atmosphere that Bendy creates you would be left with a pretty average first person puzzler with crappy combat. It is credit to the team at Rooster Teeth that they have managed to elevate Bendy and the Ink Machine to a much higher level with a fantastic style and the general creepiness of the game. It comes with a 12 rating which I feel is about right given that my 5 year old was well aware of Bendy before I was thanks to YouTube. I can certainly see why it has gained an almost cult status already and is certainly a game that will stay in my mind for a while. There is also a rumored 6th chapter slated if you believe the Internet so if you end up being a fan keep your eyes peeled for more Bendy in the future.

Bendy and the Ink Machine was reviewed using a digital code supplied by the publisher.

You can check out our Bendy and the Ink Machine screenshot gallery below:

In this article:bendy and the ink machine, joey drew studios, Nintendo Switch, PS4, Steam, Xbox One