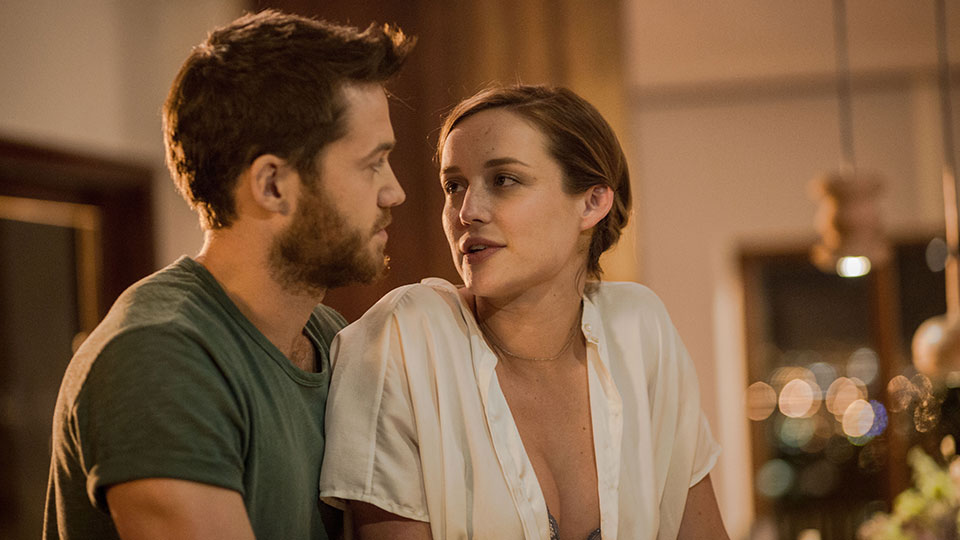 Gwynneth Kealey (Sarah Dumont) and her husband Adam (Tom Ainsley) hit a rut in their relationship following a betrayal. In an attempt to patch things up and get their marriage back on track, the couple head into nature for a camping trip to deal with their issues. After pitching their tent and getting intimate, the couple realise they aren’t alone and discover a deadly snake. One false move and they could end up dead so Gwynneth and Adam are forced to work together to try and outsmart their deadly intruder.

Serpent brings to mind another film I’ve watched and reviewed recently – The Monster. Like that film Serpent uses a deadly enemy as an analogy for the issues going on between the main characters. Unlike that film, Serpent isn’t about addiction and neglect, it’s about a couple keeping secrets from one another who are dangerously close to being pushed over the edge. In the opening moments Gwynneth is seen to be receiving messages from a lover and it appears she’s been trying to ignore him. Adam suspects that something is amiss but tries to push it to one side until he’s not able to do so any longer.

Once the couple is trapped inside their tent, they are faced with no option than to deal with their issues head on. While trying not to anger the snake, which would result in a deadly bite, the two remain as still as possible while they try to figure a way out of their situation. There’s no easy solution and with every move they make, they put themselves in danger.

The acting can’t be criticised here. Tom Ainsley and Sarah Dumont have nowhere to hide as they are really the only people in the film. They give very strong performances and they foster a chemistry that makes them very believable. There are some nice non-verbal moments where the two communicate a lot and you buy into their relationship. They are both tasked with being able to interact tenderly and also take out their aggression on one another, and they are quite magnetic to watch.

Where problems creep is in with the snake. One of the problems of a low budget film is that the setting is often limited and in this case the majority of the film takes place in a tent. The snake used is a real one, which adds to the suspense, but there’s inconsistencies with how it reacts. One minute Gwynneth and Adam are trying to stay quiet so as not to attract its attention, then they’re shouting at each other and the snake isn’t bothered. The end seems pretty inevitable too but when faced with a deadly snake in an enclosed space, the outcomes are pretty limited aren’t they?

Serpent is an ambitious film mostly held up by strong performances. There are some very tense moments but few scary or jumpy ones. I could actually see this translating well as a play, and it could well be more effective via that medium. Serpent is enjoyable enough but it’s not likely to stick with you for long once you’ve seen it.