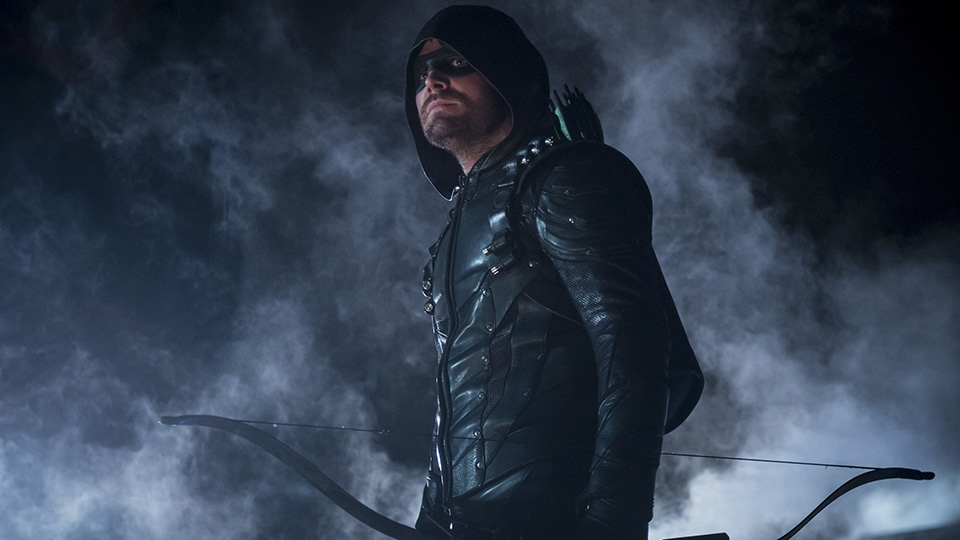 The longest-running of The CW’s superhero series, Arrow has faced plenty of criticism over the last few years. Critics and fans have become frustrated at the direction of the series, complaining that too much attention has been put on the romance between Oliver Queen (Stephen Amell) and Felicity (Emily Bett Rickards). The show’s fifth season went someway to rectifying that by introducing a brilliant big bad in the shape of Adrian Chase (Josh Segarra). The season finale saw Chase kill himself, which triggered a number of explosions on the island of Lian Yu leaving many characters’ fates up in the air.

The sixth season picks up in the aftermath of that shocking finale and there is one fatality, the mother of Oliver’s son William (Jack Moore), and another character, Thea (Willa Holland) left in a serious condition. In some ways I wish the show had been a bit braver and taken out one of the main characters but the repercussions of what happens on Lian Yu ripple all the way through the season. With Chase now dead, a new big bad steps into play and it’s a character you’ve heard of previously but not seen – Cayden James (Michael Emerson). The expert hacker was the subject of a botched rescue mission during season 5 but this season he’s free and assembled his own team of vigilantes including Black Siren (Katie Cassidy), Anatoly (David Nykl) and Ricardo Diaz (Kirk Acevedo).

Cayden’s arc plays out over the first half of the season before a surprising twist is revealed and he meddles between the original Team Arrow – Oliver, Felicity and Diggle (David Ramsey) – and the new Team Arrow – Curtis (Echo Kellum), Rene (Rick Gonzalez) and Dinah (Juliana Harkavy). That central conflict is one of the main storylines of the season as the newbies grow mistrusting of Oliver and Diggle, forcing them to separate into two teams. The plot divided fans but I liked it, especially as this season finds Oliver trying to retire as Green Arrow so he can focus on raising his son and being Mayor of Star City. He gives the hood to Diggle but conflicts arise there and tensions quickly rise between the long-time friends.

The thing I’ve always loved about Arrow remains in season 6. The ensemble cast, superbly led by Stephen Amell, is always watchable even when the material lets them down. Echo Kellum, Rick Gonzalez and Juliana Harkavy get much more to do as Curtis, Rene and Dinah respectively, and we start to feel like we’re getting under the skin of their characters. Katie Cassidy is a scene-stealer as she explores her dark side as Black Siren, the alternate world version of Laurel Lance.

The boxset is surprisingly light on special features. It contains all 4 of the Crisis On Earth-X crossover episodes and four featurettes which explore Deathstroke and Cayden James as well as the crossover and Comic Con.

I think season 6 is the strongest season of Arrow in a while. It doesn’t tie things up neatly in a bow and actually offers up a game-changing season finale that means season 7 is going to look very different. In terms of action and stunts, Arrow is still way ahead of its sister shows and for me, it’s the strongest ensemble too. With Katie Cassidy back in the fold this season and Colton Haynes returning as Roy (he’ll be back full-time in season 7), the show is going back to its roots and reminding us why it’s survived as long as it has. Season 6 is a strong step in the right direction and my hopes are high for the new season.