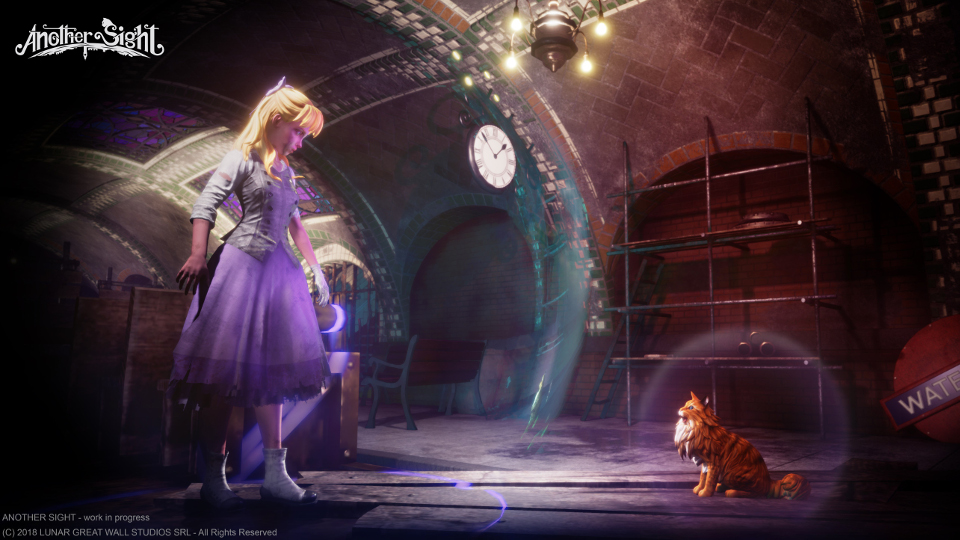 A strange journey into the sensory unknown, Another Sight takes us through a world of duality and cooperation. Kit, an Alice in Wonderland counterpart, finds herself mysteriously thwarted into an involuntary adventure; sight lost and unable to explain why, she encounters a cheshirish cat named Hodge content with helping her find her way. The experience is surreal, with levels designed around steampunkish machinery, vast caverns and other stunning locations.

The mechanics of Another Sight are simple and quite fun. You use the cat Hodge to see what Kit can’t. Both have their own respective abilities: Kit can pull levers, Hodge can climb to heights that Kit wouldn’t be able to. Hodge also acts as the ‘eyes’ of the operation with Kit’s vision in gameplay being muddled. You can use the sound of Hodge’s meowing to help Kit move along as she only feels steady where she can hear her surroundings. Switching back and forth between both characters holds no penalties and is done quite smoothly with the simple stroke of a key or press of a button. The puzzles are really well done with the level design as well. Plenty of levers to pull and heights to climb along the way.

Watch the gameplay trailer for Another Sight below:

The main star of the show is undoubtedly the art design. Another Sight takes the Unreal Engine and really puts it to the test with lush backgrounds and intricate levels to explore. No stone is left unturned with the delicate and realistic lighting, pinpointing the mood of each unique setting she happens upon. It’s truly a joy to look at and journey through with each detail sparkling along the way. I really can’t say enough about how gorgeous this game really is.

Despite Another Sight ticking so many positive boxes, it rests solely on a 50/50 line of quality for me. Unfortunately the biggest and most unavoidable downfall is the controls. Controlling Hodge in theory should be an absolute pleasure given all the platforming opportunities you have with him. Per a little investigation, it would appear that Lunar Great Wall Studios have really tried their best to do their homework–studies in feline movement to give Hodge a realistic feel were done to ensure the player would have an authentic experience.

For the most part, Hodge looks the part–there’s little detailed animations of him pressing against doors and his run has a nice canter to it. However, everything feels so incredibly clunky about the way he controls that it quickly evaporates any potential fun to be had. The opportunity to make Hodge lithe and limber was lost; he tends to ragdoll Goat Simulator style when jumping straight up, and any platforming (which is a main component of his side of the gameplay) is immediately noticeable as unresponsive. Maneuvering on ledges and lining up for jumps can be a painstaking process–he’ll gladly run full speed off a ledge whilst you’re left waiting for a delay in jumping. It’s possible to control him, but in the pace that you’re required to do so, it simply takes any fun out of playing the character.

View some Another Sight screenshots in our gallery:

Kit has her own unique set of problems. In stark contrast to how lovely Hodge looks when he runs, Kit clambers about like a stiff Barbie doll. Her voice acting does seems to fit the character well–with a hint of dialog being rushed with conflicting triggered events sometimes, the cadence of delivery is very nice.

It’s a unique game with a wonderful idea and stunning level designs, but it does tend to show through with its problems right from the beginning. With the story being so engaging and the characters being very interesting within themselves it’s a shame that it suffers from so many setbacks, especially with the platforming aspect of gameplay. In all, Another Sight was highly ambitious and accomplished so much with concept and level design, but fell so very short in polishing. My big wish is for the controls to be tightened–because if they are Another Sight could easily be on another level.

Another Sight was reviewed using a digital code supplied by the publisher.