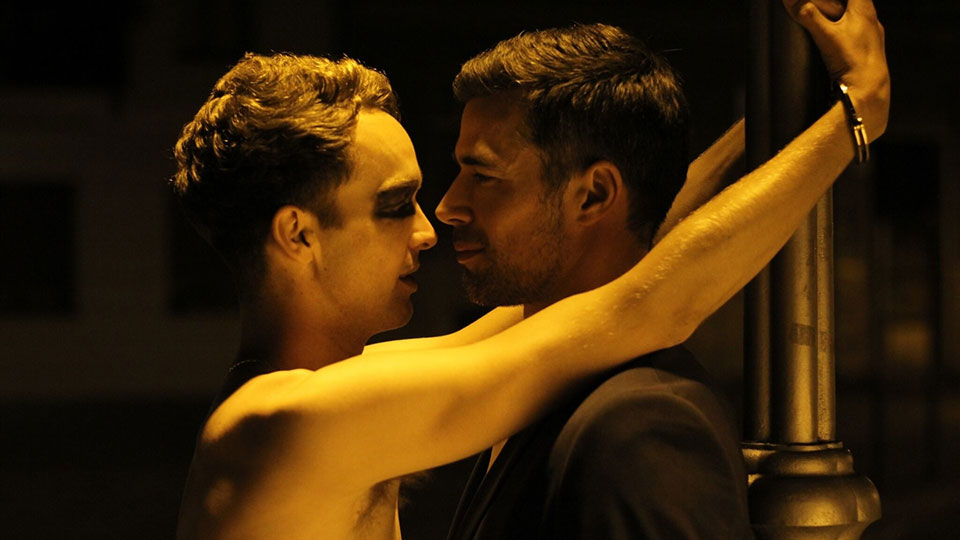 Handcuffed to a lamppost in Berlin with make-up around his eyes and completely naked Will (Pip Brignall) is found by handsome stranger Michael (Jo Weil). The two work together to release Will from the lamppost and they go back to Michael’s apartment. Finding an immediate attraction, the two men have sex before Will reveals that he’s engaged to a woman and he’s in the city for his stag do. Will keeps trying to leave but is drawn back to Michael and the two confide in one another while sharing stories about themselves.

Sodom is the feature film debut from writer and director Mark Wilshin. With only two actors in it, the film feels like it could work very well as a stage play and there’s a lot of pressure on stars Pip Brignall and Jo Weil to carry it. From the moment they meet, the chemistry between Will and Michael is electric. You know exactly where their chance encounter is going to lead them but what you don’t expect is the bold and honest conversations they have over the course of their evening together.

Once Will admits that he’s engaged to a woman and refuses to have his sexuality labelled, all bets are off as he enters into a back-and-forth with Michael. Will appears to feel shame about his actions, leading Michael to believe this his hook-up is a closet case. Whether or not that’s true, I’m not going to divulge but it takes a lot of probing from Michael to get to the answer. Will can’t explain why he’s so attracted to Michael while Michael shares information about his past and his regrets following the breakdown of a long-term relationship.

Interestingly the sex part of Michael and Will’s story is surprisingly short. If you’re expecting plenty of skin then you’ll be sorely disappointed and you’ll have to settle for the odd flash of bum and the two men talking in various states of undress. For me, it didn’t matter than the sex wasn’t a bigger part of the story. Sodom is really a character study and on that level I found it very satisfying.

Pip Brignall and Jo Weil are both excellent in their roles. Brignall brings a youthful energy to his playful performance as the ambiguous Will. He looks through big puppy dog eyes, using his good looks to get his own way while he tries to hide his inner turmoil about his actions. Weil on the other hand is impossibly charismatic as Michael and to be honest I was a bit in love with him by the time the film ended. A little older than Brignall, he is super smooth delivering a performance that is affecting and at times emotional. Together the actors almost set the screen on fire and you can feel the chemistry a mile off.

I really, really enjoyed Sodom. Some may find the all talk and not a lot of action a bit disappointing, but I liked that it felt more like a piece of theatre. You come to care about both of the characters very quickly, which surprised me, and the performances from Brignall and Weil are fantastic. This could easily have been a sex-a-thon with little context but Wilshin digs deeper for an intimate portrayal of two men sharing an unexpected connection over the course of one evening that will resonate with its intended audience.