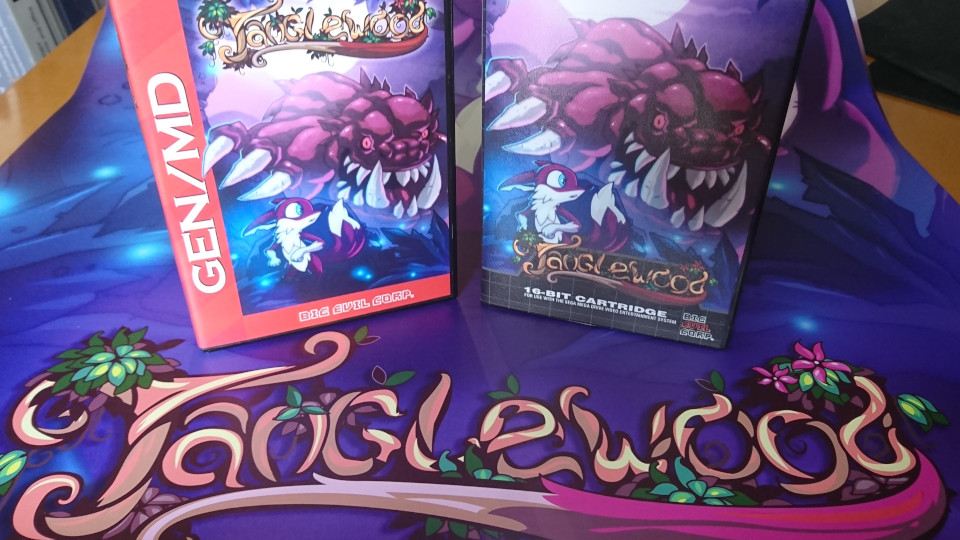 Tanglewood is a completely immersive SEGA Mega Drive (‘Genesis’ to our North American friends) format experience designed to rake up your nostalgia like never before. Developers Big Evil Corporation have taken the idea for a retro title and put it one step further–as we’re seeing games like Ion Maiden come out using reworked technology from their time, Tanglewood only works within the tools it would have had in the Mega Drive era. For better or worse, it is certainly a feat well worth poking a nose into.

Waking up in a forest, you find yourself as Nymn, a bipedal fox looking for…well, now this is the magic of a Mega Drive game right here. Let me pause to explain a little–you’re going back in time to a moment of gaming where sometimes box art and manuals were all you had to rely on to make sense of what was going on. Often, (especially with licensed franchises), there was an air of assumption between developer and consumer: you weren’t always given explicit instructions on your surroundings, abilities or even the story as a whole. A good example of this is Ecco the Dolphin. A classic in it’s own right, playing Ecco yields a very astute observation: this game will not hold your hand. It’s a hallmark of this generation of gaming…things were difficult. Unexplained. Unbeatable at times. Frustrating. Finding progress wasn’t always something that happened in due time, and it didn’t apologise for that.

Watch the Tanglewood trailer below:

How does this apply to Tanglewood? Well, in its true authentic self, you have some ups and downs that either will be embraced or lost on the modern gamer. Everything about Tanglewood is as true to the era as you can get. Completely in 16-bit format, nothing left the drawing board without the stamp of retro approval. The sound bytes, to the soundtrack are not just composed with the technology at the time, but follow the same nostalgic patterns and tones. The colour palette is lush, really using what was available back then and working it into clever and vibrant backgrounds that are truly a treat to look at. The sprites are so painfully spot on, that there’s no way I think one would be able to tell if it was from the 90’s or something of today. The detail to remain true is astounding.

With the good comes a bit of the bad though. These games evolved for a reason after all. Diving back into the Ecco talk, Tanglewood upholds every bit of Mega Drive’s panache, down to its wildly stubborn gameplay. You won’t get a story off the bat–there’s no cut scene to explain that (official explanation:) you’ve been separated from your family and safety resides in your underground home. Like Ecco, you’re simply dumped into the game and left to your own devices to figure out why, where, what and how. There are no HUDs. No displays for health, stamina or anything of the sort–instead it’s up to you to figure how Nymn moves and what exactly are his capabilities and motives are throughout.

View some Tanglewood screenshots in our gallery:

If you grew up with a SEGA Mega Drive though, this type of gameplay can be incredibly tempting in contrast to today’s library. As a result of it being on the tougher side, figuring out puzzles and progression is massively rewarding, and no doubt will take you back to the days of beating a level or game as a kid–the excitement is captured beautifully to those who seek it out and understand what it’s meant to give back.

The huge showcase of Tanglewood is how serious its authenticity has been taken. Aside from everything being made with only Mega Drive technology, Big Evil Corporation has went so far as to release Tanglewood as a physical Mega Drive cartridge due in part to their massively successful Kickstarter campaign. You read that right! An ACTUAL SEGA Mega Drive cartridge that works, looks and acts just like any other Mega Drive game. Hats off and a huge bravo for that even being a consideration. Collectors will no doubt like to get their hands on something as precious as that!

By every account, Tanglewood is a retro trailblazer undoubtedly worth checking out. It’s not easy and won’t hand you any answers, but if you’re a true fan of the Mega Drive era, there’s no way you can pass this up. It takes everything that was technologically available and brings out the absolute best of those capabilities. My big hope is that there will be many more to follow in Tanglewood’s steps.

Tanglewood was reviewed using a digital code supplied by the publisher.

Advertisement. Scroll to continue reading.
In this article:Tanglewood