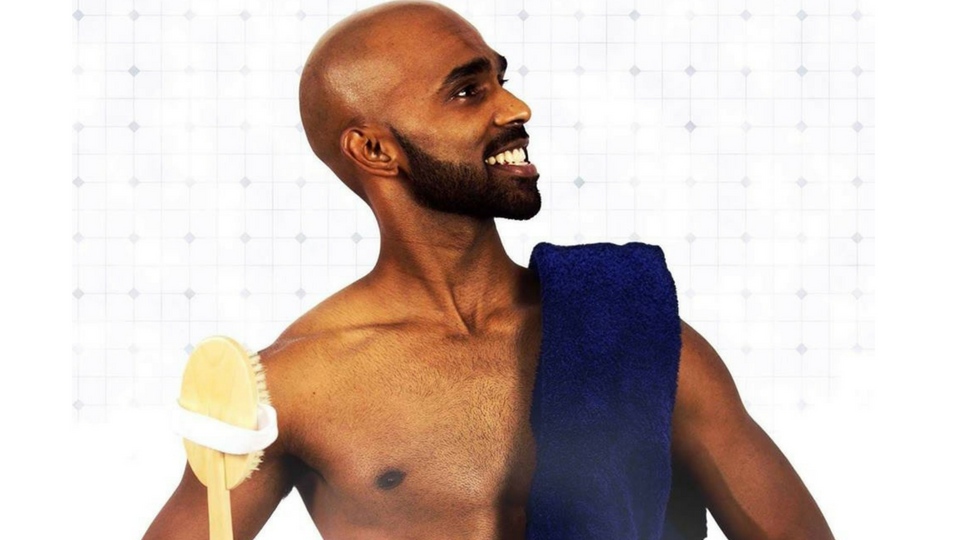 Ruven Govender has just completed his second year at the Edinburgh Festival Fringe with Ethnic Cleansing, a 50 minute show where the comic draws on his personal experiences of racism and feelings of being an outsider to find humour and relay the history of his ancestors.

The comic is South African Indian and grew up in New Zealand from the age of 10. I bumped into Ruven while he was was hard at work flyering on Cowgate during the fringe. On chatting about the premise of the show, I decided to set up an interview to hear more.

Ruven has since told me he’s enjoyed sell-out performances where ‘thirty-three people had to be turned away at the door’ at one performance. With the average fringe show rumoured to get an audience of just six, it’s clear there’s an appetite to be in the presence of this affable comic.

With many shows at this year’s fringe talking extensively about issue-based comedy, I was keen to discover more about Ethnic Cleansing’s popularity, along with how his career in comedy came about and more on the show’s success in attracting large and diverse fringe audiences.

What made you decide to be a comic?

I never considered a career in comedy, my dad gave me three choices of what I could be after high school and they were: Doctor, Lawyer or Outcast. Shortly after that conversation I was selected by the NZ International Comedy Festival for the ‘Class Comedians’ program, it was essentially a crash course in stand-up that gave us a taste of what it takes to be a comedian. After the showcase I was approached by a management company and started doing pro gigs shortly after. I am still considered an outcast by my family.

Tell me about your show Ethnic Cleansing at this year’s fringe?

It’s about making fun of British white people. I’m a South African Indian and my ancestors were sold into slavery…oh sorry did I say slavery? Haha I meant indentured labour, which was essentially a lifetime of servitude of which there was no escape. I also grew up towards the end of apartheid in South Africa which meant living in a completely segregated community with very little exposure to other race groups, so the show is really about highlighting those experiences.

You did a TED talk on ‘how racism made me funny’ – can you elaborate?

Good God it was awful. I got onstage and none of the tech or slides worked so I had to wing the whole thing. The production crew were scrambling to fix it while I tried not to have a heart attack because the event was being livestreamed globally. Two thoughts that crossed my mind: I can’t screw this up – all my family overseas are watching and if an Indian guy was doing my tech everything would be fine.

The point of the talk was that you should never accept what you’re told. I grew up in a system where the darker you were the less rights you had as a human being. I and everyone else around me knew it was wrong and never accepted this as fact although it was law. I suppose I’ve always slight anarchist qualities since gaining this realization as a child.The point of the Ted Talk was to use racism as a tool to highlight a message rather than use it as  excuse to hold you back.

What do audiences need to take away from seeing your show?

Don’t take things too seriously. I do delve into some heavy stuff in the show but it’s really OK. There is a lot of humour in it and the last thing I want is for people to be offended on other peoples behalf. I largely talk about the racism I’ve experienced but in context it’s really quite funny.

Coinciding with your Edinburgh Run, Australian Member of Parliament Bob Katter recently said ‘Are we racist? Well, we’re Australians’ – what the hell is going on in Australia and why hasn’t he been sacked?

I literally have no idea why he is still an influential member in Australian parliament. It’s embarrassing but sadly that opinion is shared by a percentage of the population. However bad politicians always make for great comedy.

How much can comedy be used to undermine far-right politicians like
Donald Trump, Boris Johnson and Bob Katter?

I was once told that comedians are more influential than politicians. I don’t know how much my show can be used to undermine the big guys in politics but to be honest they are doing a pretty good job at undermining themselves at most press conferences. Bob Katters latest ‘pearler’ was “Are we racist? Well we’re Australian!” which aired on National Television went uncommented by Parliament. With Trump and Katter and it’s just a countdown clock til they say something ridiculous in front of camera. In a way I suppose it’s kind of genius.Trump is a master of PR and Marketing, I can’t speak for much else but he does an excellent job of getting noticed even if he’s saying makes no sense whatsoever.

What motivates you to do comedy – is it political or issue driven?

I never intended to get political or have an agenda. However as I started travelling to different countries I was surprised as to how little the world knew of what happened to my ancestors and even the reality of apartheid South Africa. Personally I would just like more people to hear the story of my people.

How do you use personal experiences in your work versus observations?

In Ethnic Cleansing I’m forced to utilise more of my personal experiences than my observations because of the nature of the show. In most cases my ‘racial filter’ gives me a completely different perspective therefore my observations are generally obscure because I am and do in fact feel like an outsider.

What’s been the highlight of your Edinburgh Fringe festival so far?

I’ve managed to enjoy a fully sold out run! I have never been in a position where I have had to add additional shows. I guess Scotland can’t get enough of me roasting English white people.

What are your plans for after Edinburgh?

Next stop is Amsterdam for a few shows and then it’s back to my Dad’s chicken farm for slave work. It’s funny, right now I’m soaking in all the success of a fully sold out run. And, in three weeks time I will be knee deep in chicken shit.Its almost poetically karmic and it definitely brings my head back to the appropriate size. Although I do have moments where I’m on the farm and I think to myself “All these years later and I’m still out working the fields for free” (my Dad doesn’t pay me by the way. When you’re ethnic and your parents have a business you work for no money).

Ruven will return to the fringe next year with a full hour show. The final show Ruven Govender: Ethnic Cleansing takes place today at Laughing Horse @ The Counting House at 18:30 and 20:35. For tickets visit https://tickets.edfringe.com/whats-on/ethnic-cleansing-ruven-govender