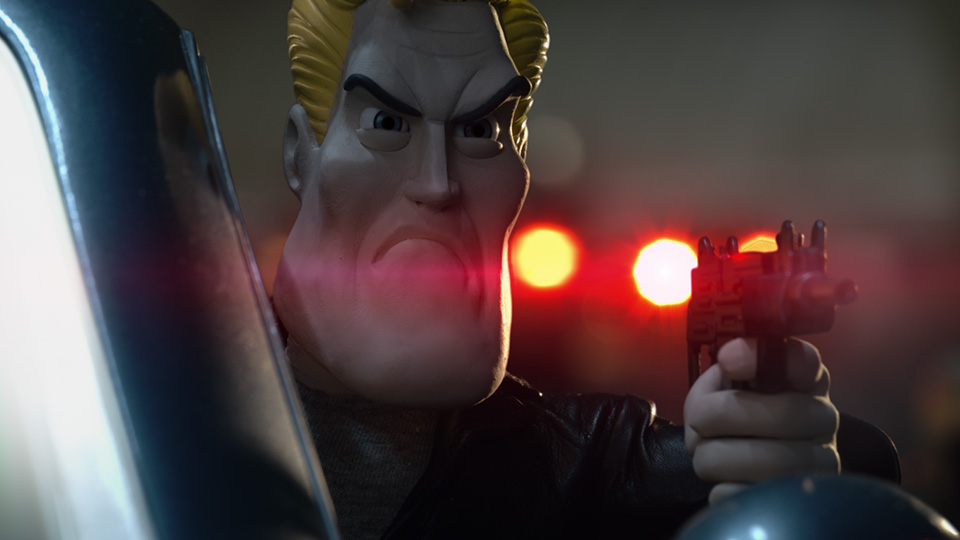 Cocky police officer Chuck Steel (Mike Mort) believes he needs no partner and is frequently told by his boss Captain Jack Schitt that he’s ‘the best God damn cop on the force’. After losing another partner, Steel is assigned to investigate a case of mysterious disappearances in the city after a witness manages to escape her attacker. When he arrives to question her, Steel is faced with kooky old Brit Abraham Van Rental, who claims that tramps are being turned into vampires. With a potential deadly threat looming over the city, Steel reluctantly works with Van Rental to get to the bottom of what’s really going on.

Chuck Steel first made an appearance back in 2013 in the short Raging Balls of Steel Justice. Created by Mike Mort, who voices Steel and a handful of other characters, Chuck Steel has taken 3 years to turn into a feature film thanks, in part, to the use of stop motion animation. Prior to the screening at Arrow Video FrightFest today, Mort introduced the film and admitted that animation for adults may be a niche genre, but judging from the audience reaction he may have been a bit off the mark.

Without a doubt Chuck Steel: Night of the Trampires received the biggest response so far in the festival and it’s not hard to see why. Steel, although a bit of an over confident douchebag, is an incredibly likeable character who spits out razor sharp lines like a machine gun. I was in stitches throughout most of the film and largely when Steel was on screen. He’s surrounded by larger-than-life characters such as his cross-dressing Captain Jack Schitt and the hilariously named Abraham Van Rental.

The plot for the film is very tight. It wastes no time introducing you to the trampires with a very effective opening sequence. There are moments of impressively heavy gore mixed in with plenty of comedy and it works really well. It’s packed with one-liners that will leave you chuckling and occasionally wondering if you really heard what you think you heard. A sub-plot sees Steel yearning for his late wife who was murdered by ninjas, and that plays out throughout the duration of the film as Steel is forced to see a therapist (who is voiced by Jennifer Saunders).

Chuck Steel: Night of the Trampires looks absolutely fantastic. You can see the care and attention that has been paid to everything from the puppets to the sets. I could tell once the film finished that I would benefit from watching it again as there is so much detail in there, I definitely missed some stuff I’m sure. The trampires look incredible too and are scarier than you’re probably expecting. Wallace & Gromit this most certainly isn’t.

I was incredibly impressed with Chuck Steel: Night of the Trampires. I knew expectation was high among FrightFest-goers and I can gladly say it’s completely worth the hype. It’s surely only a matter of time before a big distributor cottons on to the charm of Steel and orders more instalments. With smart comedy, plenty of laugh-out-loud moments and a gripping storyline, Chuck Steel: Night of the Trampires could well be the most original film I’ve seen all year.