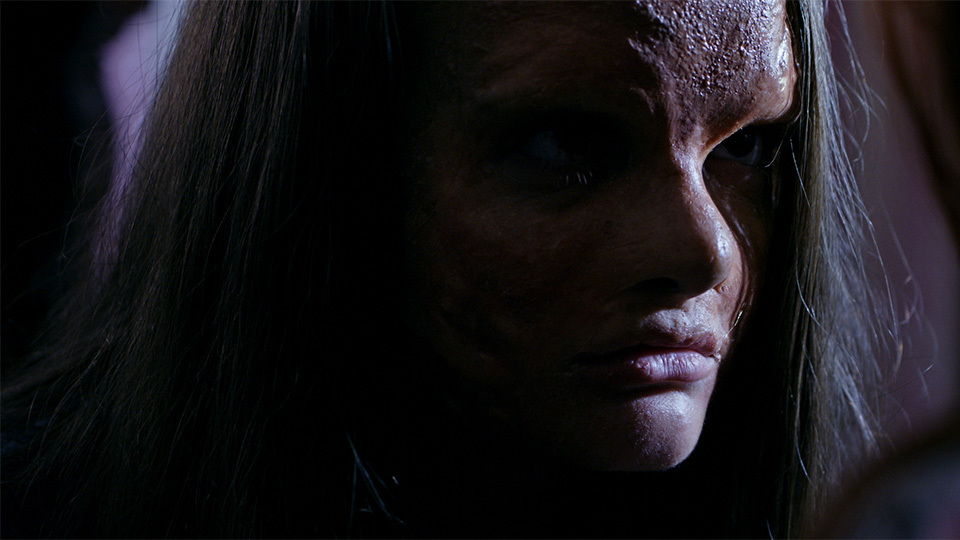 Love addict Alice (Alexis Kendra) is struggling to put an end to her affair with married man Michael (Stelio Savante). Despite attending meetings to try and combat her addiction, Alice keeps going back to her lover. When she makes a decisive effort to change her behaviour, Alice freezes Michael out and befriends Shelly (Rachel Alig), the cleaner that works in the building she lives in whose face is badly scarred. Convincing Shelly to take on extra pay to clean her apartment, Alice starts to get to know her new cleaning lady but doesn’t realise quite what she’s getting herself into.

The Cleaning Lady is co-written by lead actress Alexis Kendra and it sits neatly alongside such classic thrillers as Single White Female and Fatal Attraction. Shelly becomes obsessed with Alice quickly because she believes her to look perfect and she’s the first person to show her any kindness. The film plays heavily on the mystery of how Shelly got her scars and in time that’s revealed, and as you probably expect it’s not all that pleasant.

Showing its hand in the opening moments when a mystery person is seen putting mice into a blender before turning it on, The Cleaning Lady has a pretty nasty streak. The film has a fairly slow build as Alice and Shelly become friendly. Shelly is initially very meek and mild, while Alice comes across as a little overbearing. That dynamic quickly shifts and things take a turn for the sinister. Running in the background throughout is Alice’s affair with Michael, which Shelly does her best to encourage Alice to end.

Alexis Kendra is compelling as Alice. While I wanted to give the character a shake when it came to her affair, I started feeling more forgiving when it was clear that this is a woman who is essentially very lonely. Rachel Alig is very unnerving as Shelly, so much so that I couldn’t quite believe that Alice didn’t cotton on a bit earlier. As the two get closer, I found myself screaming at the screen, waiting for the inevitable to happen.

The Cleaning Lady isn’t the most original film but it’s pretty entertaining. I’ve seen this kind of story done quite a lot in other films but the script and the cast are pretty solid. The climax throws a curveball suggesting that we may not have seen the last of these characters, and I wouldn’t be averse to re-entering this universe. The Cleaning Lady isn’t particularly scary but there are a fair few scenes that will have you wincing and there’s enough here to keep you engaged for 90 minutes.