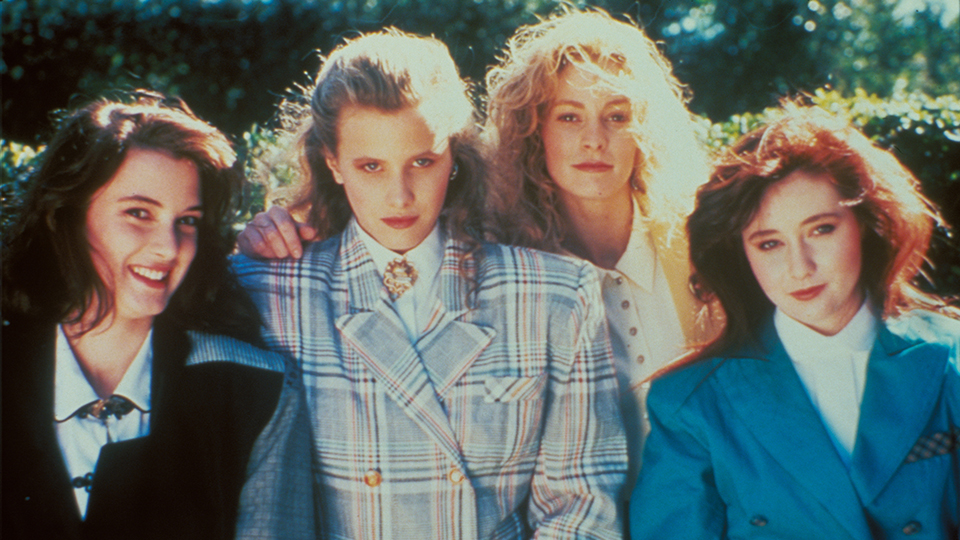 17-year-old Veronica Sawyer (Winona Ryder) has fallen in with the mean girls at her high school – Heather Chandler (Kim Walker), Heather Duke (Shannen Doherty) and Heather McNamara (Lisanne Falk) – and becomes tired of their bullying behaviour when they target an overweight girl at the school. When she herself is humiliated by Heather Chandler, Veronica teams up with rebellious new student J.D. Dean (Christopher Slater) to get revenge but she has no idea what she’s really getting herself into.

Heathers celebrates its 30th anniversary this year and it’s heading back to cinemas this week. It’s hard to believe that the film wasn’t a hit on its original release in 1988 but it eventually gained cult classic status when it was released on video. As time has gone by, the film has quite rightly been credited with changing the high school movie genre. Such is Heathers’ significance that a TV series was due to be released this year but due to a succession of real-life high school tragedies, it was canned.

It’s not hard to see why Heathers was both a breath of fresh air in the 80s and hugely controversial. Veronica is easily led by J.D. into a cycle of staging teen suicides and the film’s climax is very reminiscent of reports we hear all too frequently about schools in the US. Heathers tackles very difficult subject matter with a sharp script and a tongue firmly placed in its cheek. It purposely makes you squirm as you find yourself siding with Veronica for the most part, and it leaves a bitter taste in your mouth. She’s a sympathetic character and you can understand her feelings towards the Heathers but at the same time what she’s doing is despicable and morally wrong.

Heathers was an early film for both Winona Ryder and Christian Slater, and it’s not hard to see why they both quickly ascended the Hollywood ladder. Ryder was coming off the success of Beetlejuice and Slater the critical acclaim for his performance in The Name of the Rose. The two have an undeniable chemistry and they make it easy to get swept along with their characters. Ryder plays wide-eyed and naïve, while Slater gives an edge of menace to his character that slowly builds throughout the film.

Of the supporting cast Shannen Doherty is a standout as Heather Duke. This role was her move from child star to adult actor and it preceded her most famous role as Brenda Walsh on the long-running Beverley Hills 90210. She relishes playing the bad girl, and has throughout her career, and she’s pitch perfect in this role. Kim Walker and Lisanne Falk also give strong performances as the other two Heathers.

The new 4K restoration looks absolutely stunning. It never ceases to amaze me how films can be restored and the picture quality really is excellent. The colours really pop on the screen and Heathers has never looked so wonderful. The sound is also really impressive and if you didn’t know the movie was 30 years old, you’d be forgiven for thinking it was more modern than that.

Heathers remains a cult classic and is a film that will continue to live on for years to come. It’s eerily prescient of being a teenager in modern day America and two of the film’s actors, who both died in their 30s, bizarrely seem to foreshadow their own deaths with the dialogue they are given. Heathers was one of the first films to truly explore the damage that the high school experience can have on kids and it remains as relevant today as it ever did. With biting humour running throughout and stellar performances from its cast, Heathers is a film that everyone should see.