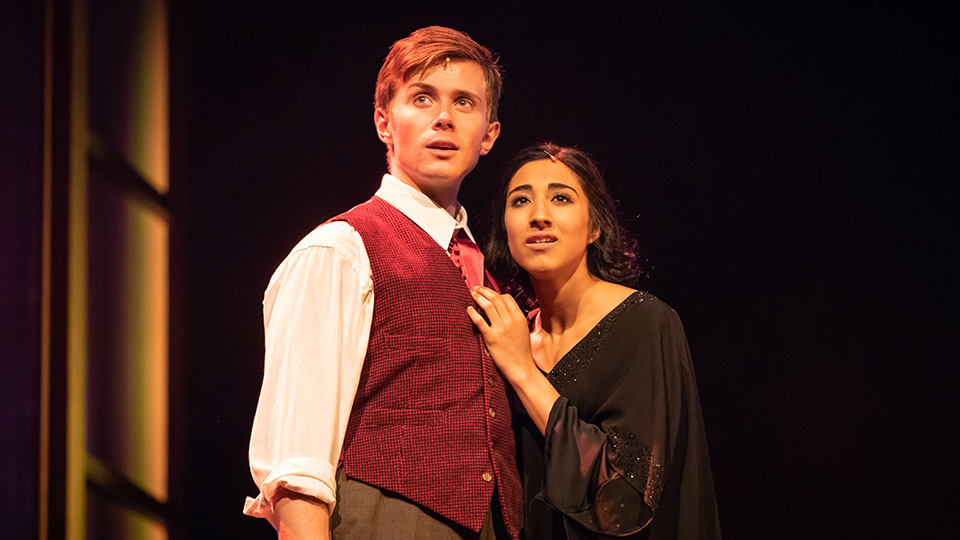 The 1912 novel Broken Wings has been the foundation for many pop songs, poems and paintings we still cherish today. Lebanese-American poet Khalil Gibran is one of the most cited poets at weddings, parties and funerals across the world – and for good reason.

Broken Wings is Gibran’s tragic semi-autobiographical novel about love, loss, corruption and women’s values which has stood the test of time even in 2018. It’s eagerly awaited arrival to the West End sees some big names under its belt including Phantom of the Opera key player Nadim Naaman and one of the MIddle East’s leading contemporary composer, Dana Al Fardan.

The play begins on a simple apartment set with an aged Gibran lamenting from love lost decades ago. Gibran enters his study to the sombre sound of the nine-piece onstage orchestra, bellowing low, moody chords. It’s the typical scorned poet scenario, with a candlelit study and crystal vase of whisky. Will he drink to remember, or drink to forget?

There’s no spoilers in this one, as we’re told from the word go that his love, Selma, is gone. Lost to the powers of men, corruption and out-dated values. It’s a slow start as we learn of his life growing up in America, feeling lost as a writer and wishing to move back home to Beirut for soul-searching. However, it’s clear to see the talent brewing in the cast from the opening numbers – their operatic skills are second to none, if a little surprising from such a young team.

We flashback to an 18-year-old Gibran as he heads home to Beirut, with the ghost of his future lingering at the sidelines in a cold blue light. The musical numbers begin happy, with the humorous chime of the mandolin making it seem authentic. The songs are about home, and how important it is to return – something every single member of the audience quietly ponders over, agreeing with. The younger Gibran is indeed a force to be reckoned with in terms of his talent and powerful singing voice.

It’s not long before Gibran stumbles across an old best friend, and soon the love of his life, Selma. In the modern world of dating it seems a bit forced, incomprehensible to some that they fall in love on first meeting. However, it’s clear to see why Gibran is the third best-selling poet of all time, behind Shakespeare of course, as the words exchanged in a lovers embrace brings tingles to the most heartless of audience members.

However, like all great love stories – tragedy hits. Gibran is not the man Selma is to be betrothed to, and so we meet our first villains. However, it is man of God, the Bishop and his nephew Mansour, that are the richest men in Beirut. They wish to form marriage alliances for fortune. Selma’s father Farris is a wealthy man, but a widower and marrying Selma off leaves his alone, turning him ill.

Devastated, Gibran is lovesick – furious at the traditions and values set by his forefathers. Selma becomes a figurehead for women’s values, stating that her gender are merely possessions of men – married off to procreate with the wealthiest suitor, to a cheating husband that doesn’t love them. Throughout the play, the men congratulate themselves for the women’s successes – even in childbirth.

Gibran and Selma attempt to reconcile their love for one another while tackling the twists and turns of archaic values set to limit the role of women. But do they succeed?

Broken Wings is a powerful production, that highlights the ever-strong presence of corruption and poor treatment of the female sex that still exists in the Middle East today. It brings to light to farcical role of religion, it’s powerful links with reputation and corruption, as well as the greedy sexual nature of men in wealth.