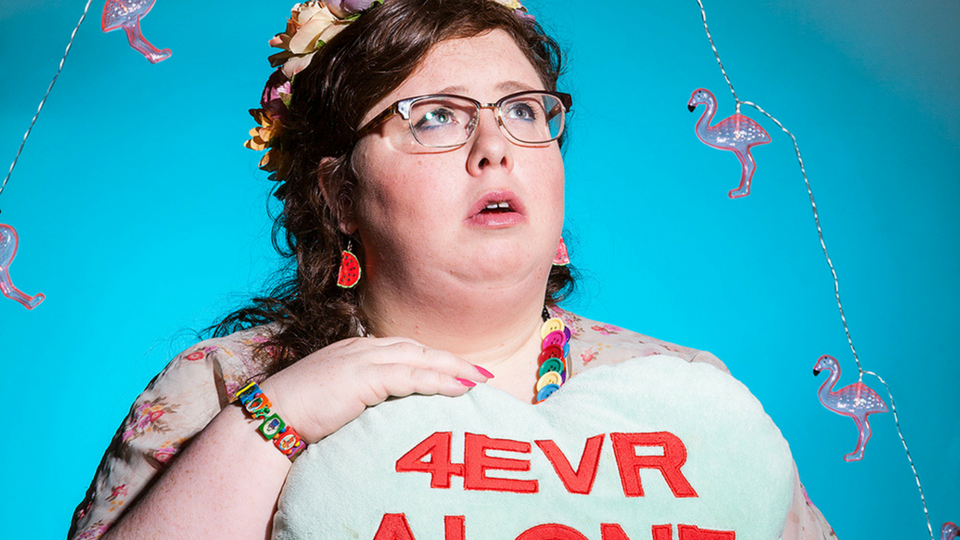 Alison Spittle is amid an exciting period of change as she approaches this year’s Edinburgh Fringe with her third show Worrier Princess at the Gilded Balloon Teviot. What’s the one thing that could be as stressful if not more so than a month of back-to-back comedy gigs? Moving house. I caught up with Alison on her impending relocation to London, alongside her upcoming Fringe run, to find out how she feels about what’s in store.

An established household name in Irish comedy,  Alison’s new show Worrier Princess relays steps the comic took to get ‘mentally healthy’ in the run-up to her recent Irish TV series, Nowhere Fast. She talks about bracing herself for the online response to her televised work, where she believed that ‘people [would] start calling her Big Momma’s House on the internet’.

The comic is taking a calm approach to this year’s Edinburgh outlook, sadly brought on by a recent family bereavement that served to put the annual comedy rite of passage into perspective. However, one thing’s for sure, Alison is rapidly becoming an acclaimed comedy voice at Edinburgh this year and beyond.

How are you feeling about taking your third show Worrier Princess to the Fringe?

I don’t think I’ve quite cracked my attitude towards the Fringe yet. I’ve put a lot of pressure on myself to get the act finished as I’m making the move to London this year. You tend to get in this absolute bubble where you think nothing matters except reviews, but no-one cares outside of it. I had a bereavement recently and before it happened I would have thought Edinburgh is the be all and end all, but I don’t feel that now, I feel a lot freer. My attitude has changed, I’ve become very calm about it. I’m just going to do the show whatever happens, people can have opinions on it, I’m excited about Edinburgh and excited about life, it’s all change.

How has your attitude to the Fringe changed year-on-year?

Every year it’s like picking a lock, come back with more knowledge to make it better the next time. It’s my third show at Edinburgh, my very first show was a disaster. I made the mistake that many comedians have; of thinking that because I had an hour of material, I had a show. I was so enthusiastic that I had even agreed to take part in a documentary for Irish TV which ended with me crying on screen. There was a time during the run where I had just two people in the audience, and I just broke from my routine and asked them if they were alright, and one person replied ‘I’m sorry my English isn’t’ good’ – I had a disaster. I used to look at the Edinburgh experience and come home and think ‘everyone knew something that I didn’t know, and now I know it now and can go back next year and do what I need to do’  but nobody actually knows what to do. Edinburgh doesn’t define me anymore, I wish I’d found this out sooner, instead of a week before I leave, as it would have saved on the worrying!

Your show Worrier Princess takes on issues such as misogyny, female sexuality, anxiety and more. What’s driven the context for the material this year?

It’s been all-encompassing for women over the last year, things like the #metoo movement bringing topics to the surface to talk about. I actually had a young female relative who was being sexually harassed at work. She had the confidence to tell me and tell her parents and get out of that job. I don’t think this would have been as easily discussed for young people if the #metoo movement hadn’t highlighted that it’s ok to talk about sexual harassment because it is wrong. When I was younger and if I was sexually harassed it would be put down to ‘oh that’s just the way the world is’ but now more people are saying no, this is not how the world works and this is not acceptable.

How has life changed since your TV show aired and how else has this influenced the show?

Someone said to me about my recent TV show in Ireland that they felt it was about my relationship with the concept of validation from men, what’s expected from me and my life as a teenager. When I got the TV show, I thought all of my problems would go away, as it was something I’ve wanted for a very long time, but I became worried about how I’d cope with the pressure, so tried to get myself sorted and mentally well. I compare it to how I felt as a teenager in certain ways to how I respond to things now.

You also cover the concept of internet trolling, what aspects come into the show?

With the show, I do a bit about trolling, and being trolled, the way we speak to each other online and what we expect from each other. I used to be a troll myself, when I was about 11, I used to go on chat rooms and pretend to be a clown car on fire in the corner of a chatroom where people pretended to be vampires, just to annoy people. People like to get a reaction and feel important, we all do, I empathise with it but also realise I didn’t sign up to be a troll’s punching bag – no-one does.

How much does it help to actually talk about your life on-stage in terms of being ‘mentally healthy’?

I still need to figure out if it’s therapeutic to talk about it, I can only talk about my experiences. It doesn’t always help, it depends what I’m talking about. In my last show I spoke about having had PTSD after two men broke into my house. By performing it a lot I started to relive it and think maybe I shouldn’t be doing this..

What are you looking forward to most about being a comedian living in London?

I was born in London and I’m at a point where it’s time to move there. A lot of great Irish comedians have moved across the water to give it a go. While I’m not looking forward to standing beside someone and breathing into their armpit, I want to have the chance of doing three gigs every night and you can’t do that in Dublin, you’re lucky if you can get one gig a night.

One of the most annoying questions I personally think a journalist can ask to a female comedian is ‘what’s it like to be a woman in comedy’, as it’s very reductive and reinforces the notion that its unusual for women to be funny or to work in comedy. How do you feel about the question?

I want to encourage as many women to do it as possible, and not discourage by focusing on any negatives. It’s got so much better for women purely because more women are doing it at the coal face, and I’d say to any woman, give it a go, try it and see if you like it. When I wrote a sitcom in Ireland where three of the main characters happened to be women, a male director (not someone I was working with) came up to me and said ‘how’s your show for women going?’. I didn’t know it was a show for just women! It was a really annoying thing to say to me, as it shows no ability to empathise with characters. I’m doing comedy for everyone not just women. I actually started a group called Women Who Want To Do Comedy, with resources, where to get gigs and mentoring, to encourage more women to do it, because I was encouraged to do it – I never said I wanted to do it, someone told me to give it a go.